Dr. Christof Sauer was recently named as Professor of Religious Studies and Missiology at the Evangelical Theological Faculty (ETF) in Leuven, Belgium. The extent of his appointment is 50%. This is a special academic chair which will be financed externally. To the knowledge of the International Institute for Religious Freedom (IIRF) this is the first professorship at any theological faculty globally with a combined research focus on religious freedom and persecution.

Prof. Dr. Christof Sauer is co-founder of the IIRF and directs the unit of this institute in Cape Town, South Africa. In addition he edits its academic journal International Journal for Religious Freedom as well as various books series on this theme. His research assignment at ETF focuses on individual and collective religious freedom. Prof. Sauer researches situations worldwide where this fundamental human right is restricted or violated, especially for Christians. Related phenomena, such as the persecution of people for their faith, will be reflected on from a Christian perspective.

Pew Research Center stated in January 2014 that 76% of the world’s population live in a context where religious freedom is seriously restricted. The World Watch List 2014 of Open Doors International indicates that Christians in more than 50 countries suffer discrimination and persecution to varying degrees. Dr. Christof Sauer: “Such persecution often occurs in the form of restricting or contesting the free exercise of religion of others, particularly the spreading of other beliefs. Persecution is in fact a violation of human rights.” 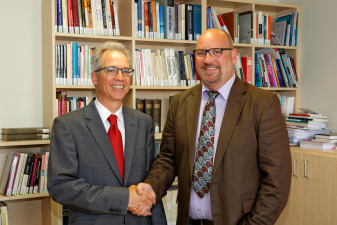 Prof. Dr. Patrick Nullens, rector of Evangelical Theological Faculty on the appointment of Prof. Dr. Christof Sauer: “Historically Christian thinking has contributed to the basis for the emphasis on freedom of conscience and human worth. Believing is a deeply human choice which we want to experience in life in total freedom. Yet many people still continue to suffer under totalitarian and fanatical powers, secular or religious. The appointment of Dr. Sauer at our faculty means that we, as students and teachers from different contexts and countries, will be able to think through current questions regarding human rights and religious freedom and conduct research from a Christian perspective.”

Prof. Dr. Christof Sauer (1963) undertook his academic theological training at the Universities of Erlangen and Tübingen in Germany and earned a doctorate in 2002 with research about Christian witness in a Muslim environment at the University of South Africa in Pretoria. In 2013 he completed postdoctoral research (Habilitation) on the topic “Martyrdom and mission: A comparison of positions in global Christianity” at the Protestant University Wuppertal/Bethel in Germany. He currently serves as Associate Professor Extraordinary in Practical Theology and Missiology at Stellenbosch University, South Africa.

The professorship emerged in cooperation with the International Institute for Religious Freedom (IIRF) of the World Evangelical Alliance, with offices in Bonn, Cape Town and Colombo. The IIRF is already strongly involved in religious freedom advocacy at the European Union in Brussels through its director Prof. Dr. Thomas Schirrmacher and research coordinator Yakubu Joseph. The Commissioner for Islam Affairs of the World Evangelical Alliance, Prof. Dr. Christine Schirrmacher, also teaches at ETF.

The professorship of Dr. Sauer at ETF in Leuven is made possible by several organisations actively engaged for religious freedom including Hilfe für Mensch und Kirche (HMK) in Switzerland and Alliance Defending Freedom (ADF) in the United States. Among the agencies requesting consultancy or commissioning paid research is Open Doors International.

The Evangelical Theological Faculty in Leuven, Belgium, provides education, research and community service. It has around 200 students in its bachelor, master, and doctoral programmes. The programmes of study are accredited by the Accreditation Organisation of the Netherlands and Flanders NVAO.
Students in the Dutch-language bachelor’s programme come from the Netherlands and Flanders (Belgium). The English-language master and doctoral programmes attract students from all over Europe and beyond.