Genocide in the Near East - Declaration made at the Vatican Synod

(Bonn, October 19, 2015) Upon the occasion of the 50th anniversary of the Vatican Synod, the World Evangelical Alliance’s representative at the Synod, Thomas Schirrmacher, has called upon the international Christian community to demonstrate more solidarity with persecuted Christians in the Middle East and around the world. 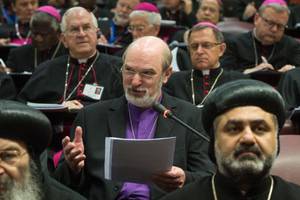 At the same time, he gave a statement as to why he chose to speak of, among other things, the genocide of Christians, Yezidis, and Mandaeans.

In his address in front of the plenary session of the Synod the day before, Schirrmacher directed the following words at the Pope:

After several patriarchs from the Near East have spoken about the topic of the persecution of Christians in Syria and Iraq, I simply cannot fail to add a word, since it is the topic that is my body and soul and because I am convinced that there is a genocide of Christians, Yezidis, and Mandaeans occurring in the Near and Middle East in the sense of the UN definition:

There has to be a jolt that goes through the international Christian community in order to produce a demonstration of a heretofore unequalled level of solidarity with persecuted Christians in Syria and Iraq, Pakistan und Bhutan, Nigeria and Sri Lanka, Vietnam and the Maledives, in China and India, and in many other countries. We need joint public prayer for the persecuted church on the part of the highest church leaders.

The International Institute for Religious Freedom o the World Evangelical Alliance, which does work on the topic of the persecution of Christians and provides information for states, researchers, and churches, we need a partner in Rome! For that reason, I want to express the humble wish to the head of the Catholic Church to afterwards be allowed to again address him in a personal conversation.

Please give us the name of a particular contact individual for the topic of the persecution of Christians. Or better still, please create an institution in Rome which will take on this topic and with whom our specialists can directly work.

Schirrmacher is simultaneously the President of the International Society for Human Rights, which for a long time has worked against the persecution of Christians around the world and against the infringement of religious freedom of all religions.

In the following we document the declaration on genocide:

Genocide in the Near East - Declaration made at the Vatican Synod

The murder of Christians, Yezidis, and Mandaeans, and the systematic persecution, rape, and enslavement of these ethno-religious groups in Syria and Iraq clearly and without doubt fulfill the offense of genocide. It is not a matter of some sort of over-dramatization but rather of a simple application of the definition of genocide by the UN.

Article II of the 1948 United Nations definition of genocide reads as follows:

In the present Convention, genocide means any of the following acts committed with intent to destroy, in whole or in part, a national, ethnical, racial or religious group, as such : a) Killing members of the group; (b) Causing serious bodily or mental harm to members of the group; (c) Deliberately inflicting on the group conditions of life calculated to bring about its physical destruction in whole or in part; (d) Imposing measures intended to prevent births within the group; (e) Forcibly transferring children of the group to another group.

In what sense would this not apply to the persecution of Christians, Yezidis, and Mandaeans? One element would suffice, but four of them (a, b, c und e) have been adequately documented. Indeed, for each of them there are pieces of evidence from propaganda films by the Islamic State. Only d) is not so easy to demonstrate.

·         Christians, Yezidis, and Mandaeans are systematically killed, driven out, or forced to convert.

·         The children of Christians, Yezidis, and Mandaeans are killed or subject to forced reeducation.

·         Women and girls are raped, forced into prostitution, and forced into marriage with IS Muslims. As a result, the minorities are prevented from being able to procreate (UN definition, point d.).

It is to be pointed out that this genocide is announced and planned, and it is actually being implemented accordingly.

Why do so many church leaders, scientists, and politicians beat around the bush when it comes to genocide?

Now regarding the possible counterarguments.

With respect to genocide, it is irrelevant that there are also other victims or that there are also other victims among the majority population. The genocide committed by the Germans under Hitler against the Jews and against Roma and Sinti was accompanied by war against many nations and people groups and last but not least the Nazi terror conducted against the German people as a whole. Despite this, the genocide committed against Jews and Roma and Sinti remains genocide,

Question: Isn’t IS also fighting Shiites and Sunnis who are not in agreement with their version of Islam?

If one goes on the assumption that the IS also seeks to kill and eradicate Shiites as a defined population group or kill and eradicate Sunnis who think differently as likewise apostate, then one additionally has to view that as genocide. But the fact that non-Islamic ethno-religious minorities are the target of genocide from the side of IS is not changed by this discussion at all!

I am aware that the assessment that the situation is a matter of genocide also has consequences in international law. However, that is an additional, if necessary step, which I would prefer to leave to the specialists.