Nepal: A Nation With More Than Mountains (by Brian Stiller)

Nepal’s tourist brochures feature mountains and temples. But peer behind that façade and another reality shows up.

In 1960, there were 30 known Christians. Today there are over a million and a half. How did it come about? Quite simply, the Nepal story of Christian growth beautifully describes the power of indigenous (local) leadership and witness.

As Nepal, once a closed country began to gradually open, missionaries built a hospital and eventually joined forces under the United Mission to Nepal in 1954. Restricted in their operation, they worked as Non Governmental Organizations (NGOs) in fields such as education and health, but weren’t permitted to evangelize or build churches. 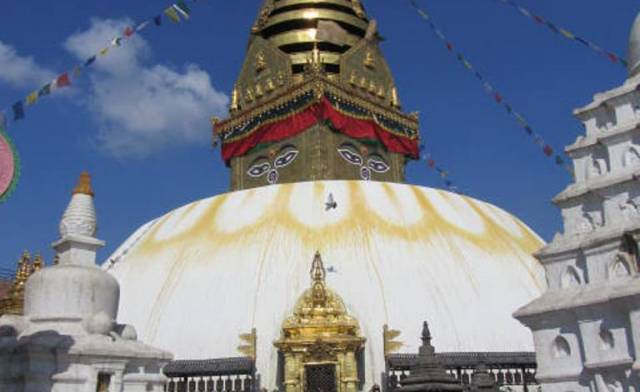 Conversions, post 1960, began without strategy or fore thought. India and Britain recruited Nepalese to fight (including the famous Sherpa people from eastern Nepal) in their respective armies. Enlisted, many heard of the Gospel and came to faith. Returning to their families and villages they told about the Jesus they had met. Soon churches flourished.

With little available university training in the country, many students went elsewhere. Again, as with the soldiers, students contacted Christians in their countries of study. After graduating they returned home, and as did returning soldiers, told their families and friends about Christ and churches were built.

Nepal, a country of 28 million not only learned of Christ by returning soldiers and graduates, but a New Testament phenomenon was at work.

Here was what I didn’t expect. When I asked if there was one issue that triggered so many conversions, the answer was immediate and without dispute: healings and miracles. Tucked away in valleys, trapped behind mountain peaks, people are often cut off from medical help and intervention. The logic is simple: when you are sick and your only choices are a witch doctor or Jesus, the former adds cost and brings no solution, while Jesus heals and brings transformation to life and community. The explosive witness made visible by healings, reverberates through families, villages and tribes leading many to confess Christ.

I inquired of key areas of impact brought about by the Gospel. I note a few.

Three – Hard work. Wondering why this was a mark, it was pointed out that many in their religious culture viewed no work as a blessing: one is cursed to work by your “karma” or fate. Learning that work is a gift inclines a person to work better and harder.

Four – The Gospel disregards the cast system which especially degrades untouchables or the Dalit. When converted, they can freely enter a church and eat alongside other Christians knowing they are regarded as the beloved.

Five – Patterns of honesty and forgiveness become normative. Following the Maoist decade of destruction (1996-2006 — over 18,000 were killed) the government promised a truth and reconciliation commission. Years later it still hasn’t been implemented. When asked why, an official said, “Forgiveness is not part of our tradition. Without that understanding, such a commission is useless.”

Six –Conversion brings economic changes. Their many religious festivals require money. The poor feeling obliged, and with little cash borrow from landlords and friends. Once a Christian, they no longer attend which eliminates that outlay of funds. Consulting a witch doctor on issues of sickness or distress, they may be told to do even more at a festival, adding to their cost. As well taught not to gamble or consume alcohol increases savings and returns more money to family for food, education and health.

One leader smiled, and said, “Brian, I tell government leaders – The best way to improve the economic well-being of Nepal is to promote Christian faith. Christians work harder. Save more. Women are better treated and our social well-being goes up. Christians make great citizens.”

Headlining today’s news reports and a topic of conversation with Christian leaders is the current attempt to rewrite Nepal’s constitution. In the early ‘90s the king was forced to modify the kingdom and in 2001 the royal family was massacred. In 2007 a Constituent Assembly was formed and an interim constitution written, guaranteeing freedom of religion. The fear today is that if competing parties won’t agree on a new one, there is danger the ruling constitution will revert to a Hindu monarchy and the repression of religious rights.

Even so, on top of the world, I discovered a marvelous example of a people who figured out how to grow up their own forms of evangelism and church life. In bold and unashamed witness, an obvious drive to care for handicapped and marginalized, they also refuse to allow the political system run away with its own brand of religious fundamentalism or anti-religious secularism. It’s a church the Apostle Paul would have had joy in writing to.