The Association of Evangelicals in Africa has received word from the Evangelical Fellowship of Sierra Leone about their prayer requests following floods and mudslides, in which hundreds of people lost their lives. Please read, share and join us in prayer for those affected. 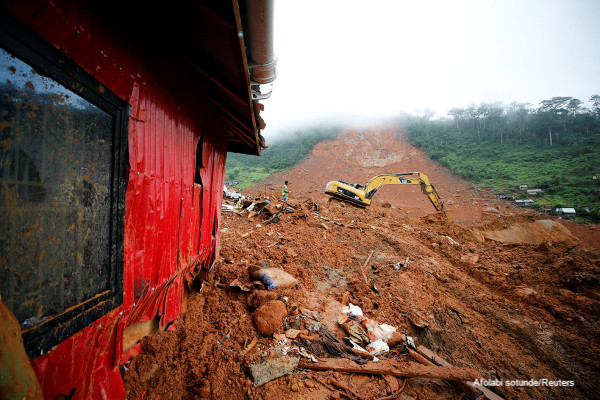 August 18, 2017, Nairobi -- We condole and mourn with the people of Sierra Leone, during this time of grief, following devastating floods and mudslides when part of a mountain carved in. Over 400 bodies, including large number of children and adults alike, have been recovered for burial. The recovery mission continues as it is feared  over 600 people are buried in the mud.

Following is a dispatch from the General Secretary of the Evangelical Fellowship of Sierra Leone (EFSL), Rev Jonathan Titus-Williams addressed to the AEA General Secretary, Rev. Dr. Aiah Foday- Khabenje. We wish to magnify the crying call of EFSL, to stand with them in this time of national crisis, in prayer and material support. EFSL is a significant service provider, with ongoing significant societal engagement, since the 1990s when Sierra Leone was plunged into a decade long rebel war (1991-2002) and the Ebola epidemic in the region in 2014/15.

The AEA General Secretary, Rev. Dr. Aiah Foday-Khabenje is himself a Sierra Leonean, currently living in Nairobi, Kenya, where AEA is headquartered.


Dear GS,
Greetings and hope this email finds you well and the AEA family. I write to report and also to call on the Evangelical community to join us pray for Sierra Leone as we had experienced serious flooding and mudslide in Freetown, Sierra Leone on the 14th August 2017.

The flooding occurred in different parts of the city at Kaningo, Lumley (23 people died) Colbot, Ferry Junction, Kissy (5 people died), Kroo Bay (2 bridges swept off); Dwarzark (many houses damaged); 7th Battalion and Babadorie, Lumley where also some houses were flooded. I thank God for His saving grace as my house was also flooded in the front house, garage and backyard, but through the timely intervention of our office driver- who quickly punched holes on the fence for the water to pass through- we were able to divert the course of the flowing water.  Unfortunately, most of the houses in our neighbourhood were flooded.

The mudslide which occurred in Motumeh, Regent, Freetown is the worst natural disaster ever, in the history of Sierra Leone, as about 100 houses and more than 400 people perished in the early morning hours of 14th August 2016.  Some of the dead bodies have been retrieved, some mutilated and impossible to identify their person.  The search for bodies at the site is still ongoing and more are being found badly decomposed, as the mud mixed with rubble is spread up to 1000 meters.   The Central Hospital Mortuary as of yesterday 15th August reported the total number of deaths as 297 (109 children, 83 women and 105 men).  The office of National security has warned that the Mount Sugar Loaf is seriously cracked and must be avoided by residents as a disaster prone area.

We have received confirmed reports of some of our member churches who have lost some of their members and many injured in the mudslide:


Please continue to pray for Sierra Leone as weather forecast states that there is a heavy tornado heading for Africa and will hit sierra Leone in four days since yesterday and we all in the city are like living in great fear.

Praying also for EFSL as we try to mobilize resources to reach out to the victims.