General April 15, 2021
This article was first published in Salt&Light, and was republished with permission. 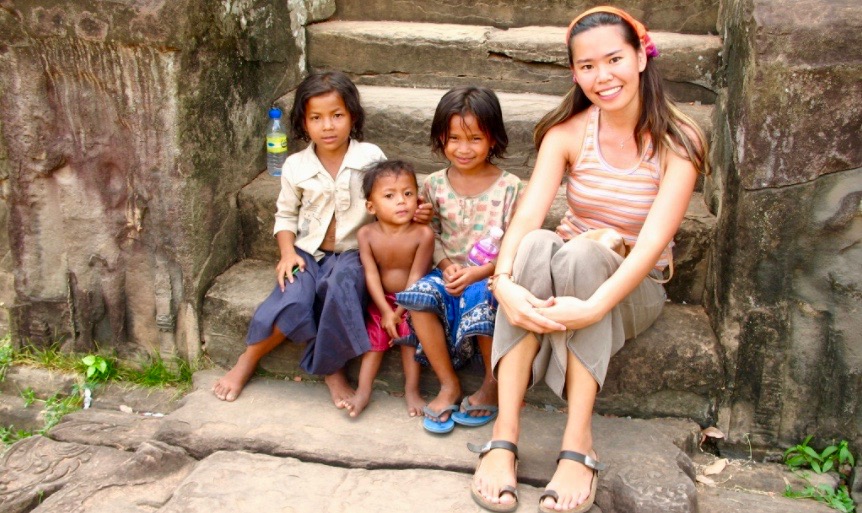 Dr Lin visiting some children from Cambodia during a work trip to the country. All photos courtesy of Dr Lin Peirong.

Singaporean Lin Peirong has been appointed as one of the top leaders of global body World Evangelical Alliance (WEA).

The WEA is an international platform made up of a network of churches in 129 nations that give an identity and voice to more than 600 million evangelical Christians worldwide. It is the evangelical equivalent of global key faith organisations such as the Vatican or the World Council of Churches.

“I am humbled by the appointment,” said Dr Lin. “This was not in my realm of possible things to do ‘when I grow up’. Then, I did not know anybody who worked in global Christian ministries and Singapore was seen as the mission field, one that learnt from others.”

The work of WEA

Her appointment to the WEA is a significant one, given that the United Nations (UN) consults and works with the WEA on global faith and social issues.

Since the relocation of its headquarters to New York in 2010, the WEA has increased its engagement at the UN promoting peace and reconciliation, advocating for the poor and needy, and also communicating evangelical beliefs and values.

The WEA holds Special Consultative Status in the Economic and Social Council of the UN, which serves as the central forum for discussing international economic and social issues, and for formulating policy recommendations.

Closer to home, for instance, the WEA has previously raised the issue of the use of the word “Allah” by Malaysian Christians at the United Nations Human Rights Council in 2018, urging the Malaysian government to lift the ban on the use of the word in recognition of “their longstanding use of this name for God”.

Recently, the Malaysian High Court recognised the 1986 government directive that banned non-Muslims from using of the word “Allah” as unconstitutional and invalid.

Said Dr Lin on Singapore’s involvement with the WEA: “We have been having talks recently about how we can support the churches in China further.” The senior leadership team of the WEA meeting with the regional alliances around the world. Dr Lin is in the top second frame from the left.

The WEA, said Dr Lin, works alongside evangelical believers to meet their needs. For example, its most recent member is the Communiomessianica, a community of Muslim background believers around the world.

“As members of the WEA, they know that they have a spiritual family who stand with them and are ready to provide them with any support that they may need,” she said.

As for Dr Lin, her new role as the Deputy Secretary General of Operations would mean that she oversees and manages all administrative matters related to the WEA, including personnel, finances, legal matters, communication, funds development and membership.

Personally, she also hopes to do more to tell the WEA story. Not many people may be familiar with the work of the WEA, and Dr Lin admitted that she used to be one of them.

“We joke that the WEA is the best kept secret … We hope to do more to ‘expose’ this secret as it is indeed a treasure trove. Our vision is ‘Evangelicals united globally for gospel transformation’ and our acts of unity include meeting practical needs like fundraising for pastors in India during Covid times when people couldn’t go to church, or advocating for what we believe in in the UN,” said Dr Lin.

The last General Assembly of the WEA held in Jakarta in 2019.

Finding Jesus and her identity

For one who once did not know the existence of WEA, how did she land up in its top leadership team?

It turned out that Dr Lin had just finished her PhD in Theology in and Religious Studies in 2018 and was moving from Brussels to Bonn, Germany for family reasons. When she told her professor at the theological faculty about her impending move and search for a new opportunity, he told her about the WEA and connected her with Dr. Schirrmacher. She was intrigued at the possibility of being connected with an international organization while living in the European continent.

“It can only be God who has made this possible since I did not know about the WEA before joining the organisation. All my personal strivings would not have led this to happen. I think the main thing that I did was stay open and flexible for God’s leading,” said Dr Lin.

“Retrospectively, I see how my experiences prepared me for this position. However, in living the day to day, I spent too much needless time wondering how on earth could God use these seemingly disparate experiences,” she added.

Dr Lin came to Christ in her growing up years. Her parents were not believers then. Her first Christian influence in her life was her Peranakan grandmother.

“One of my earliest memories while I was staying with her was of her praying with me in Malay before I went to bed. I could understand words like tolong, baba, mama and amen,” said Dr Lin. Dr Lin with her immediate family at a gathering to celebrate her father’s 70th birthday.

Later on, her parents would decide to expose their children to Christian values and decided to explore the faith further by joining the community of believers at the Salvation Army. Dr Lin was active in youth ministry, children’s ministry and also in the worship team.

During that time, Dr Lin was a sensitive teenager who was constantly searching for her identity and the meaning of life.

“I was fearful and extremely insecure about everything. Physically, I was a lot taller than most of my friends. At the same time, I was also not sporty. Studies wise, my brother who was two years older than me excelled in it way more than I did. I wondered what I was good at and what made me ‘me’,” said Dr Lin.

People told her that Jesus was the answer but she really wanted to know what that meant. She was not content with paying lip service during worship services and living life without Him on other days.

“There was once when I heard a worship song by Hillsong going: Lord I give you my heart, I give you my life. I live for you alone. I remember praying and asking God to make this a reality, that my life was really for him and what that actually meant.

“Through a process of spending time with God intentionally through journaling, worshipping, sharing and praying with trusted Christian friends, the reality of God’s love became more real to me,” she said.

Besides being plugged into a church, her friends in Methodist Girls’ School were also instrumental in the formation of her faith. Dr Lin and her secondary school friends while in school juxtaposed with one taken 20 years later.

Later on, while studying in NUS business school, she wondered how she could serve God with her degree.

“I wanted to do something meaningful. Working in a bank or a big MNC did not sound very meaningful to me. I thought about serving in church but at that time, my parents were not very excited about the idea. They wanted me to get some ‘real life experience’,” said Dr Lin.

She prayed for God to provide an option that would make her parents happy yet at the same time, be meaningful. She saw a job opening at World Vision and applied for it.

“The purpose of the organisation – a vision for every child, life in all its fullness – captivated me. This is the social aspect of religion as pointed out in James 1:27 and I saw in the organisation a possibility of truly living out beliefs,” she said.

“I believe that our faith is more than a personal commodity (personal salvation, personal discipline). It should influence society too. Development work for me is one way that we can ‘change the world’ for the better.”

She started working with World Vision in the human resources department in the Asia-Pacific office, while studying for a masters in organisational leadership. As part of her work, she travelled across the region to countries such as Cambodia, Myanmar, Nepal, Bangladesh, Papua New Guinea, Solomon Islands and Vanuatu to support different offices with their needs. Visiting children in Bangladesh during a work trip.

She found that she loved to work alongside diverse groups of people, and she also found love.

Dr Lin met her German husband, Dirk, while working in Papua New Guinea with World Vision and was attracted to the values that she saw him living out. After marriage, he found a job in Brussels and she moved there with him.

After battling culture shock, she eventually settled in by developing a social network and finding a church community. During her time in Belgium, she also juggled work and studies – being the administrative coordinator at the Institute of Leadership and Social Ethics, a research institute, while doing her doctoral thesis. Dr Lin with her family and relatives during her last Chinese New Year visit back home in 2019.

One of her main findings is the importance to be intentional in reflecting Christian values in both the content and processes of the organisation.

“In business schools, we study different management concepts and sometimes, we simply transport these ideas to the non-profit, religious world. What we do not do is to question the assumptions and the relevance of these concepts for the religious world,” said Dr Lin.

“For example, the idea of an organisation is very much related to the modern worldview, one that is reductionist and has a clear cause and effect rationality. Our Christian worldview is a lot more nuanced and fuller. This should then be reflected in the way we manage our organisations.”

She had wanted to bridge both disciplines of management/organisations and theology, and she hopes to implement these ideas in her current work.

In 2018, Dr Lin and her husband moved to Bonn, Germany, to be closer to his parents.

She joined WEA in the theological concerns department as its human resources director and research coordinator, enabling her to combine her love for theology with different organisational activities.

Her husband, Dirk, is the chief executive at another non-profit organisation called ZOA Germany, which does its work in challenging regions like Sudan and Yemen by supporting their recovery.

A year later, the couple had their first child, Hans Xi. Hans is the German derivative for John and Xi means Joy, as in the Mandarin phrase “xi le”. Dr Lin with her husband and son.

When asked for her thoughts what she hopes to see in the future of the Church, she pointed out two aspects.

“I hope the Church will be less doctrine-based and more experience or story-based, so that our lives become the living testimony to who God is. People do not act simply because “the Bible tells me so”. I believe that it is possible to love God with our heart, soul, mind and strength,” said Dr Lin.

“Perhaps there should also be less emphasis on denominations. As the world becomes more polarized, Christianity is one of many identities that we can have. We need to be intentional about unity and truly work together to learn to speak with one voice together on key issues.”