Stand Up, Speak Out, and Take Action – An Open Letter to the Church at Large On World Refugee Day 2020

Few would disagree that the world is not as it should be. It feels like we are on a mutinous ship sailing off course into a hurricane in a war zone. And as much as we would like to focus on solving one crisis at a time, we have little choice but to deal with them all at the same time.

Among the challenges we need to keep on our radar is the escalating global refugee crisis. As is true for other great challenges of the 21st Century, the Church has potential to be an important part of the solution if she will dare stand up, speak out and take action. 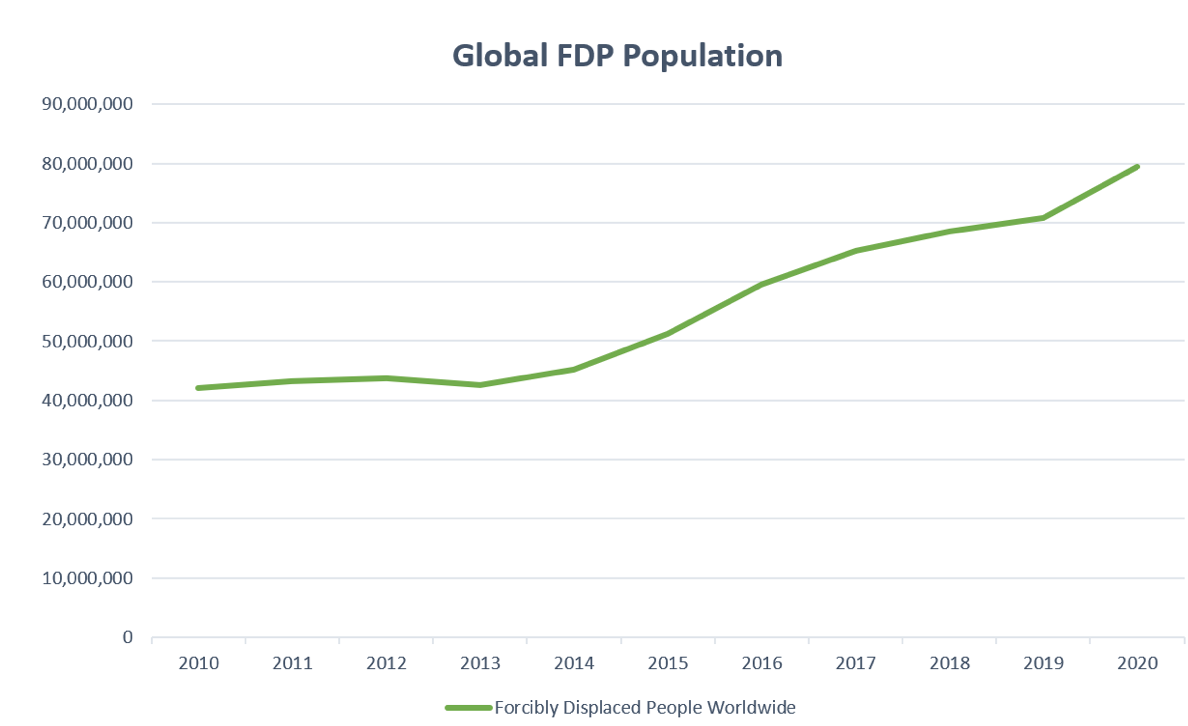 Table 1: In the past 10 years, the number of forcibly displaced people has doubled to nearly 80 million worldwide. (Statistics from UNHCR Global Trends. Statistics are taken from the annual Global Trend issues released between 2010 -2020. Global Trends is available from www.unhcr.org.)

World Refugee Day is observed annually on June 20th to help us not lose sight of the escalating number of displaced people worldwide who have been forced to flee their homes due to persecution, war, and gross violations of human rights. We call these women, children and men, “refugees”, “asylum seekers” and “internally displaced people” (IDP). One person in every 97 people is forcibly displaced today. (UNHCR, Global Trends 2019, published in June 2020.) They are among the most marginalized and vulnerable people in the world.

The majority are women and children. Although each person’s experience is unique, they have this in common: they fled their homes because they feared for their lives and they cannot safely return. (Learn more at www.IAFR.org/learn and www.IAFR.org/toolbox.)

A tiny fraction of the refugee population is given opportunity to integrate into their country of refuge or to resettle to another country in which they can begin to rebuild their lives. Most languish in camps, detention centers, government housing, or on the streets for years and even decades as they wait on a solution to their displacement. Life in such conditions is nothing short of dehumanizing.

“I wake up every morning and have to remind myself
that I’m human.”

(From a conversation I had with a Somali man in Kakuma refugee camp, Kenya.)

The world has identified three solutions to forced displacement, each of which deals with restoring place to people.

On the face of it, these should work. But they are failing miserably. They fail not because they are bad solutions. They fail because our world lacks the will to implement them in any meaningful way.

For how can a refugee return home if the conditions that forced her to flee have not been resolved? And how can a person integrate into her country of refuge when 85% of the world’s refugees are in developing nations that do not have the economic or social capacity to absorb so many people? And how can they resettle to another country when nations are increasingly reluctant to offer them opportunity to do so?

Not only are the solutions failing, some nations that could be helping are avidly pursuing unjust and harmful “solutions”. Some have mobilized their military to stop refugees from entering. Some are erecting fences and building walls to keep them out. Some have created policies of deterrence – purposely creating inhumane conditions for asylum seekers and refugees within their borders. Some have even developed policies to offshore asylum seekers – sending them to wait in another country while their case is processed (including Libya, Rwanda, Mexico, Papua New Guinea, and others). Governments pursuing these kinds of “solutions” are prone to misrepresent refugees and asylum seekers, framing them as a threat to their society rather than as people in desperate need of safety.

Such responses only serve to increase suffering, violate human rights, and contribute nothing helpful to the pressing need for solutions to forced displacement in our world.

So as the number of forcibly displaced people in the world rises, the space in which they can seek refuge is shrinking. This increases the uncertainty, vulnerability, and hopelessness with which displaced people wrestle daily. Where can they find hope for a solution to their suffering and loss of place?

“Faithful Christian ministry will often take Jesus’ followers to places where hope is in short supply: places where a sense of hopelessness hangs over a community.”
(The New Testament In It’s World, by NT Wright and Michael F. Bird, page 888. Publisher: Zondervan Academic, 11/2019.)

While it is troubling to see some Christian leaders and churches supporting anti-refugee and anti-asylum seeker policies, there are a growing number of others advocating on behalf of forcibly displaced people and actively welcoming and serving them. They rightly believe this to be an essential part of the mission with which God has entrusted us.

We shouldn’t overlook the fact that human migration was part of God’s plan from the beginning when he commanded humankind to “be fruitful and multiply, and fill the earth”. (Genesis 1:28) Following our rebellion against God and our subsequent deportation from the Garden, human migration plays an important backdrop to much of the biblical narrative. Many are the stories of forced migration in Scripture. (Download “Refugees in the Bible” for a listing of many forcibly displaced people in the Bible. Available at www.IAFR.org/toolbox.)

Furthermore, the Bible is filled with verses communicating God’s expectation that his people seek the welfare of the vulnerable – including the oft repeated trio of the fatherless, the widow and the foreigner. What foreigner is most like the orphan and the widow if not the refugee?

To be absolutely sure that we don’t miss the importance of this, God flat out commands us to love the alien as we love ourselves (Leviticus 19:34) and to welcome strangers. (Matthew 25:35) For this is how the kingdom of God works itself into our turbulent world.

Fear of refugees and asylum seekers cannot advance the kingdom of God.

The kingdom comes when we let go of fear and embrace love. It comes into view when we choose to no longer view refugees and asylum seekers as a threat to be stopped, but rather recognize them to be people in need of our welcome and protection.

Imagine if the majority of churches worldwide actively joined their voices to others in the world calling upon our nations to actively welcome, protect and integrate forcibly displaced people into our societies rather than spending millions to keep them outside of our borders. We just might be able to influence public opinion and awaken the will of our governments to meaningfully implement solutions to forced displacement.

Churches can do more than advocate for place on behalf of refugees and asylum seekers. For what local community is better suited to helping people survive and recover from forced displacement than a church? At her best, a local church is a supportive, welcoming, and healing community that offers life-giving faith in the God who sees, hears, and cares for us. We are to be communities that reflect the image of God to others – especially to the marginalized and vulnerable in the world.

A healthy church turns outsiders into insiders. Local churches have the holy privilege of offering place to others that sends the powerful message: “You belong here. You are one of us.” It is impossible to overstate the profound impact this has on a person who has been stripped of their place in the world.

The Church has a critical and unique role to play when it comes to engaging the global refugee crisis. She can do what humanitarian agencies and social services cannot. The Church can rehumanize refugees and asylum seekers while helping them integrate into their new context. Such work is central to our mission and plays to the natural strengths of a healthy church.

As we sail on deeper into the turbulent 21st Century, may the Church stand up as a beacon of hope as it plays an active part in the implementation of solutions to the benefit of those who have been stripped of place in the world.

“Spend yourselves in behalf of the hungry
and satisfy the needs of the oppressed,
then your light will rise in the darkness,
and your night will become as noonday.”
Isaiah 58:10

About the Author
Tom Albinson has been serving internationally as a missionary among refugees since 1981. He serves as Founder/President of International Association for Refugees (IAFR) and as Ambassador for Refugees, Displaced and Stateless People with World Evangelical Alliance (WEA). He is a founding member of the Refugee Highway Partnership (RHP).