The One Body of Christ Includes People of All Nationalities, Countries, Cultures, Languages, and Also People of All Classes and Social Milieus

Thomas Schirrmacher, the Associate Secretary General of the World Evangelical Alliance responsible for relationships among the churches, praised the “Jesus Unites” platform in a welcoming address at the Free Evangelical Church in Bonn and described it as a model for other countries. “Jesus Unites” is making a significant contribution as German churches and mission agencies work faithfully with the growing number of immigrant churches, congregations holding worship services in languages other than German, and multi-cultural churches. Schirrmacher thanked the Arbeitsgemeinschaft evangelikaler Missionen (Consortium of Evangelical Missions) and the German Evangelical Alliance for their foresight and engagement, extending far beyond their own member organizations. 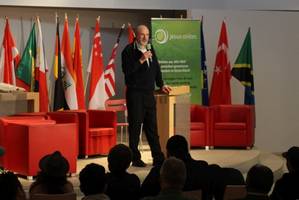 Within the framework of the western regional conference taking place in Bonn, Schirrmacher emphasized that it has never done true Christian belief any good for the church to think and live in a nationalistic and ethnically limiting manner. “Belief in Jesus Christ,” he observed, “transcends all national borders, languages, and cultures. There is only one body of Christ, which comprises all countries, cultures and languages, and also all classes and social milieus.”

Schirrmacher acknowledged that the state has the right to ensure that all its citizens know a particular language so that they will be in a position to participate in public life. “That role begins at the age when formal schooling starts,” he explained. “The state may legislate this and even use its power to ensure that people learn the country’s official languages.”

“Jesus’ church, however, has received another task, for which the majority language and majority culture are secondary. The Reformation fought to allow people to worship God and to learn the Word of God in their own everyday languages. Christians with other cultural and linguistic backgrounds should not merely be permitted to honor God on German soil in the language closest to their hearts or in the language of their choice; they should be encouraged to do so. It would be absurd to force Christians to pray to God in German because they are in Germany. Also, conversations about faith with members of their own ethnic group touch on such personal and deeply felt topics that they are usually better discussed in one’s mother tongue.”