The Story of the Evangelical Alliance in Chad: an Island of Peace in the Heart of Africa

"If it is possible, as much as lieth in you, live peaceably with all men:” writes the Apostle Paul in Romans, chapter 12, verse 18. This passage has become the guiding principle of the Entente des Eglises et Missions Evangeliques au Tchad (EEMET), the organization grouping evangelicals in Chad, in its quest for peace after more than forty years of political unrest and civil war in the country.

Also, knowing that two men cannot walk together without first encountered (Amos 3: 3), the EEMET, with support from the Mennonite Central Committee (MCC), has been committed since 2006 to communicate its vision through the training of pastors, Catholics priests and Imams of Chad. To this end, seminars were held each year on topics as diverse and varied for the construction and consolidation of peace in the country. 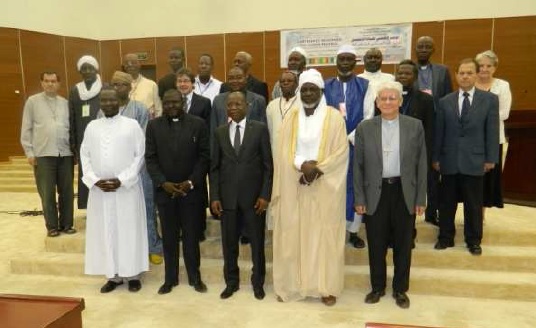 Sustained dialogue between the Secretary General of the EEMET, Archbishop of N'Djamena and the President of Supreme Council for Islamic Affairs (CSAI) of Chad led to the organization of an interfaith worship in peace, each first day of year. This informal event has grown during the celebration of the fiftieth anniversary of the independence of Chad, when the three leaders of the major religious faiths in the country drafted and made a joint statement on 28 November 2010, in which they demanded from the highest authorities in the country to end the use of religion for political purposes.

Together, they asked the leaders of the country to be firmly engaged in the consolidation of peace in the country and work for the unity of daughters and sons of Chad and the development of the country.

Taking note of this unique initiative of its kind and commitment of Protestant leaders, Catholic and Muslim for the cause of peace in the country, the President of the Republic of Chad signed a decree establishing the National Day of Prayer for Peaceful Coexistence and National Concord. Now, November 28 is not only the Day of the Republic, but also of Prayer for Peace in the country, as part of an interfaith platform.

An Interfaith Technical Committee was set up, composed of representatives of denominations and operating in consultation and under the aegis of the three leaders. This Committee shall prepare and organize the annual National Day of Interfaith Prayer after a training and awareness campaign in the capital and in the provinces.

Taking part in the celebration were the highest authorities of the country, members of different faiths living in the Chadian capital and / or from the provinces. In order to share the Chadian experience, but also learn from the other brothers and sisters in Africa and the world, the Interfaith Platform of Chad called Christian leaders (Evangelical, Catholic) and Muslims countries in the sub-region and beyond for the celebration of November 28, 2014: Niger, Central African Republic, Cameroon, Mali and France. The WEA was represented by Stéphane Lauzet, its Francophone Ambassador.

All guests have witnessed the various activities organized in preparation for the National Day to raise awareness about the negative impact of violent fundamentalism on peaceful cohabitation: Youth Forum, Conference on the contribution of women (believers) to the building of peace, and the sub-regional conference of religious leaders. The participation of foreign delegations to the recent Day of Prayer has deeply moved the President of the Republic of Chad.

When the news in the world is characterized by violence on religious grounds, the action combined of religious denominations in various fields has breathed a new dynamic life within communities, both between Chad and in their relations with the thousands of refugees and those who returned from Sudan and the Central African Republic in the country.

The involvement greatly appreciated by the Secretary-General of the EEMET the Pastor Potiphar Souina, alongside other religious leaders, has contributed to an understanding of the mission of the Church through the education of our perception of others, and to make Chad an island of peace in the midst of the ocean of violence in the heart of Africa.

Object of pride of the leaders of all stripes, peaceful coexistence advocated by religious denominations of the interfaith platform is an asset for the country's development and the implementation of evangelistic programs of the Church.

Our prayer is that this approach is clear to all and that the Lord protects His Church from all compromise, even if the march forward is based on a compromise characterized by respect for each other for better living together.

To God alone be the glory.