The World Evangelical Alliance has appointed an Ambassador for the Russian Orthodox Church. Dr. Vitaly Vlasenko was nominated by the moderators of the Office for Intrafaith and Interfaith Relations (Bonn), Bishop Thomas Schirrmacher and Bishop Cesar III Punzalan, according to the rules of the WEA and appointed by the Secretary General of the WEA, Bishop Efraim Tendero. Kirill I, Patriarch of Moscow and All Russia, accepted the appointment (see photo). 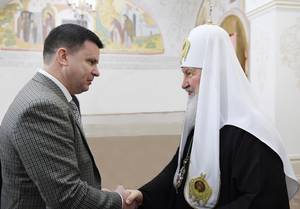 The Department of Theological Concerns of the World Evangelical Alliance and the Department of External Church Relations of the Moscow Patriarchy (DECR) responsible for ecumenical relations have also agreed on closer coordination in Moscow. It was the third meeting of its kind. The negotiations were held by Schirrmacher and Vlasenko with Archpriest Father Stefan (Igumnov), Secretary for Inter-Christian Relations of the DECR.

Schirrmacher and Vlasenko, however, had visited the board of the Russian Evangelical Alliance before and afterwards, speaking at a conference of all leading Evangelical pastors in the country. It was held on occasion of the 150th anniversary of the birth of the renowned religious personality I. S. Prokhanov in the Public Chamber of the Russian Federation. In his welcoming speech Dr. Thomas Schirrmacher stated that I. S. Prokhanov was a representative of the World Evangelical Alliance and accomplished a good deal for the unity and development of the evangelical and protestant movement in Russia.

Schirrmacher and Vlasenko also had talks with Peter Valterovich Mickiewicz, President of the Union of Evangelical Christians-Baptists of Russia, and Bishop Pavel Vladimirovich Orekhov, Chairman of the High Council of the “Evangelical Christian Church”, Director of the International Institute Study of the Evangelical Movement of the CIS of the Russian Academy of Science, Moscow. In addition, a press breakfast with numerous media representatives took place.

In an earlier meeting, Schirrmacher spoke with Yevgeny Eremin, Putin’s Church and Religious Advisor, ‘Head of the Department for Relations with Religious Organizations of the Office of the President of the Russian Federation on Domestic Politics’, about religious freedom in Russia and negotiated with high-ranking Orthodox church leaders and theologians, as well as Orthodox-influenced politicians.

Dr. Vitaly Vlasenko has been serving as a pastor and missionary since 1995. 2005–2012 he was President of the Council of Christian Evangelical Churches of Russia, 2005–2014 President of the Russian National Prayer Breakfast, 2007–2016 Co-chairman of the Christian Interfaith Advisory Committee of the CIS countries, and 2007–2017 Head of the Department of External Church Relations of the Russian Union of Baptists.