This Saturday, February 27, the World Evangelical Alliance (WEA) is holding a Leadership Handover Ceremony where the outgoing Secretary General & CEO Bp Efraim Tendero will pass on the baton to Bp Dr Thomas Schirrmacher. The two leaders will be together in a studio near Bonn while the event is live-streamed for members and the general public to witness. As Bp Tendero concludes his six-year tenure as Secretary General, he has also been appointed as a Global Ambassador for the WEA by his successor, so that he could continue to represent WEA at high-level events and serve WEA’s constituency of 9 regional and 140 national Alliances.

The Leadership Handover Ceremony, held at 1pm Central European Time, will feature contributions, greetings, prayers and blessings from every region of the world. In a letter announcing the event, Dr Goodwill Shana, Chair of WEA’s International Council said: “It is an opportunity for us to acknowledge Bishop Efraim Tendero’s contribution to the WEA and the many developments that have taken place over the past six years, and induct Bishop Dr Thomas Schirrmacher as the new Secretary General & CEO and bless him as he takes on this new role.” 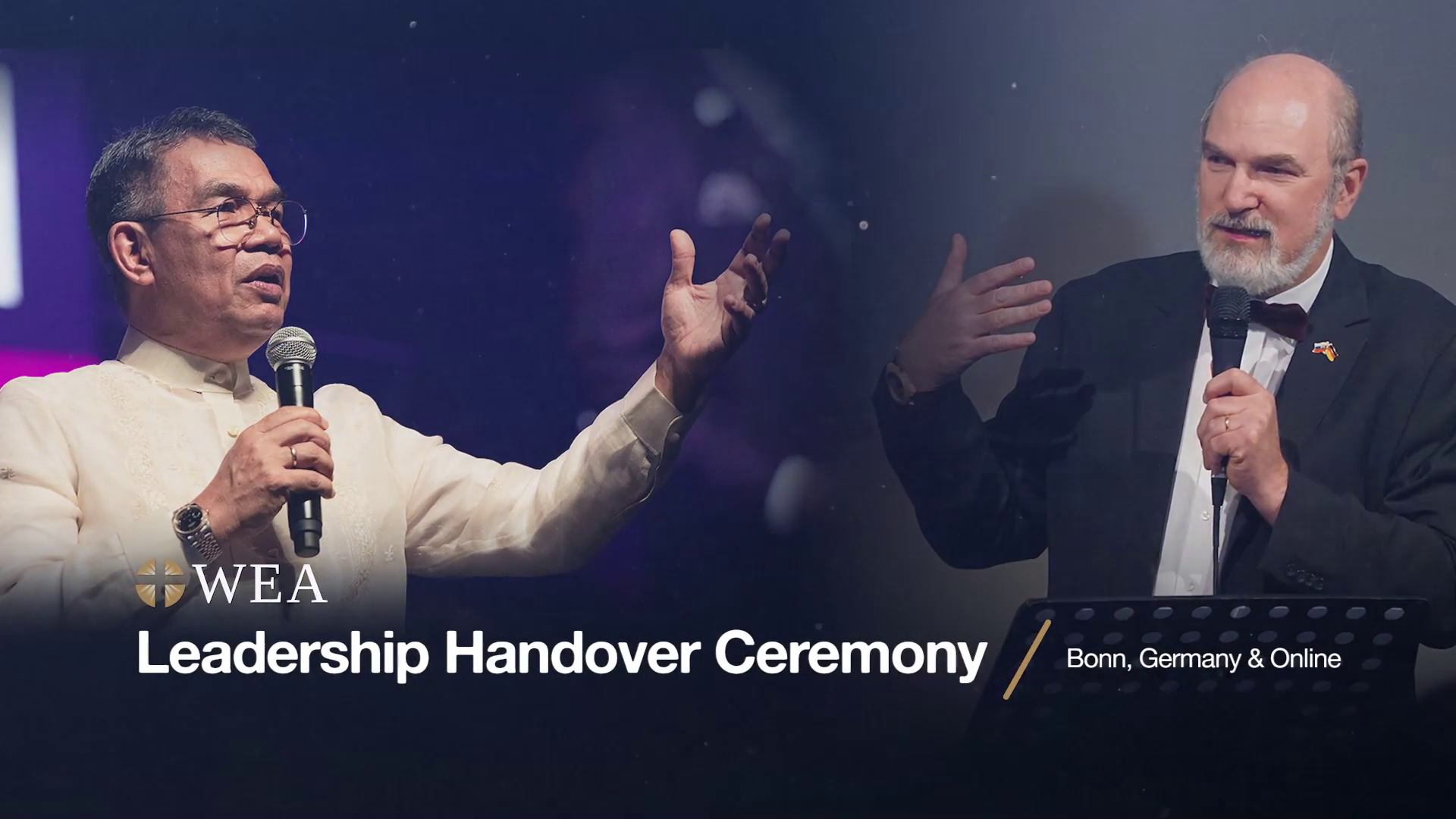 Since assuming leadership of the WEA in March 2015, Bp Tendero has worked towards strengthening the WEA in its representative voice on behalf of some 600 million evangelicals, its relationships with and service to regional and national Alliances and also its organizational structure. Some of the highlights of his tenure reflect these priorities as the WEA has increased its presence at and engagement with the United Nations in New York, Geneva and Bonn, has spoken up on issues of concerns to the global Church and given a voice to the marginalized and those facing pressure for their faith in Jesus Christ.

The WEA could also welcome more than a dozen newly formed national and two regional Evangelical Alliances and launched the Global Institute of Leadership that provides training, mentoring and peer-learning opportunities for Alliance leaders. Organizationally, the WEA has widened its reach by establishing six hubs where WEA’s senior leaders operate and serve its global constituency, including in Bonn, Colombo, Geneva, Illinois, Manila and New York.

“As I hand over the leadership, I believe that the WEA is stronger today than it has ever been. This would not have been possible without the prayers, generosity and support from colleagues, members, partners and friends. I am very grateful for everyone who has accompanied me on this journey, for the many conversations, the encouragement and the enriching moments we shared together. And I look forward to continuing the journey with WEA in the new role of Global Ambassador,” said Bp Tendero, and added: “There remains much room for growth. The WEA is indispensable to the global evangelical movement and I am excited about what lies ahead in the coming years.”

As Global Ambassador, Bp Tendero will support the Secretary General by representing WEA amongst Alliances, member bodies and gatherings, and serve as a spokesperson for the WEA; engaging at national and international conferences on matters of spiritual and inspirational leadership among WEA Alliances and member bodies; and write on matters concerning evangelicals in various forms of publications — explaining, defending and advancing the evangelical witness in the world. He will also provide mentorship to younger leaders within the WEA global family.

Bp Dr Schirrmacher expressed his appreciation for Bp Tendero’s contribution as head of the WEA and also for accepting the new role. “The WEA has grown a lot over the past few years and I am grateful to assume leadership at a time when there is so much momentum and potential for the future, which is in no small part thanks to the leadership of Bishop Ef,” Bp Dr Schirrmacher said, and added: “I am also thankful that he accepted the role of Global Ambassador, which allows the WEA to continue to benefit from his wisdom and insights as he visits and encourages Alliances in different parts of the world. He is the first Secretary General to continue serving the WEA in such an official capacity, which will be a great asset to the organization as we serve such a vast constituency.”

To learn more about the WEA and some of the developments that have taken place over the past years and also to hear about Bp Dr Schirrmacher’s vision for the future of the WEA, join the Leadership Handover Ceremony on Saturday, February 27, at 1pm CET. The event will be live-streamed on a special webpage and is open to the public and media. Visit worldea.org/en/handover for more information on the program and speakers, as well as for the livestream on the day of the event.