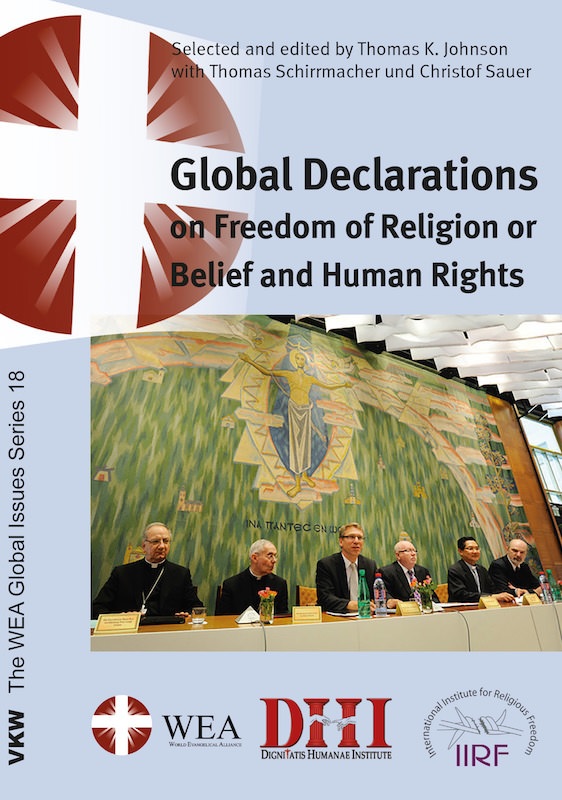 The World Evangelical Alliance published a compendium with 19 global declarations on freedom of religion or belief and human rights in its ‘Global Issues Series’. The book is available in bookstores, but there also is a free pdf available on the web.

A reader similar to this was first compiled and printed for distribution at the Tirana (Albania) Consultation on Discrimination, Persecution and Martyrdom in November 2015, which was organized by the Global Christian Forum on behalf of the Vatican, the World Council of Churches, the World Evangelical Alliance, the Pentecostal World Fellowship and other global and regional Christian bodies. It has been substantially expanded by adding more primary sources, including the message of the Tirana consultation itself. The sources selected appear in historical order.

“Our united concern to address the problems of discrimination, persecution, and martyrdom facing Christians should be organically tied to our proper Christian concern for human rights protection on the global level, including the right to freedom of religion for other faiths. For this reason, we are providing a selection of primary sources about human rights, persecution, and religious freedom which can be used in schools, universities, and other educational institutions. Whether you are a student or a journalist, a diplomat or a representative of your church or other faith community, understanding this set of texts will equip you to assess and respond to religious persecution and the related human rights abuses in a morally serious manner. We recommend that these primary sources be supplemented by philosophical, theological, and sociological studies that will provide helpful insight for understanding and application.”

This is the second book of the WEA Global Issues Series that is co-published together with the (Catholic) Dignitatis Humanae Institute (DHI) in Rome. The other book is the revised second edition of Thomas K. Johnson’s ‘Human Rights: A Christian Primer’.