A Refugee Camp Near the Syrian Border (by Brian Stiller) 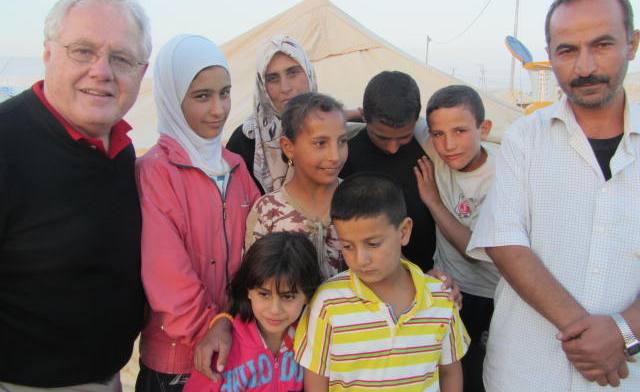 War and suffering takes on a different look when seen through the eyes of those fleeing mass killing.

I spent part of an afternoon in a tent (part of a camp of 40,000 Syrian refugees) with a Syrian family. Wanting to tell me of their hopes, we shared from a plate of dates and passed around a bottle of water. ‘Could I take your picture,’ I asked. Eagerly crowding around, they smiled.

The story of Syria is played out each night as al-Assad`s army tanks boom out their shells, jets scream in their swoop of destruction and soldiers go nose to nose in this all-out civil war. We see bloody bodies, torn flesh and listen to the wail of ambulances but what I had not had was a face-to-face conversation with those who escaped.

Relieved to be out of harm’s way, it was obvious they ached for family and friends left behind and the 40,000 who had died. Now safe with their children, they had a clean tent, boxes piled in the corner with rations, clothes and rudimentary tools of daily living. Dry and out of the wind, in a tent with no insulation, zero degrees Celsius is still zero degrees.

Syria, multilayered with centuries of many cultures, bruised and battered by war, tribes live cheek-to-jowl jostling for respect and power. As a land and people, they look biblical and religious to their core. So what are we to make of it all, and where is the presence of Christ in such malaise and mayhem?

Today’s geographical Syria is small to what it once was – a land mass that included Lebanon, Jordan and Israel during the early 20th Century, its ancient boundaries included parts of today’s Turkey and Iraq. Following WWI, the French colonizers (1946) withdrew giving her sovereignty making Syria both very old and very young. Ancient and modern live in constant clash sorting out who they are as ancient, but living in a fast and changing 21st Century. A country of 22 million, 50% are under 19, and 57% under 25 years are unemployed.

The current president’s father — Hafez al-Assad — took control in a bloodless coup in 1970. Over time he gave most senior positions to members of his religious Alawi sect (12%) a sect founded around 1000AD. A schism within Islam it embodies a strange religious mixture of Muslim, Christian, Gnostic, Neoplatonic and Zoroastrian ideas. Ruling with an iron fist he dominated Syrian life, controlled by the cruelty of its secret police that instilled fear by sending tens of thousands – mostly uncharged – to the notorious Mezze prison. In a curious way, Christians were generally protected in Syria as they were under Saddam Hussein in Iraq – of course as long as they said nothing against the regimes. When Hafez al-Assad died in 2000 there were 3,000 public statutes – a form of ‘primitive cult of personality.’ (Mid East scholar Fouad Ajami)

Upon his father’s death, his son Bashar al-Assad, a British trained ophthalmologist succeeded. In the first years of his rule, he seemed to find success (called the Damascus Spring – July 2000 to February 2001) by slowly dismantling the top-heavy bureaucracy. However as pro-democracy movements spread in the ‘Arab Spring’ of January 2011, “the younger Assad showed himself to be an uncompromising autocrat . . . more unyielding that his father.” (Ajami)

Skilled in foreign diplomacy, Syria has been the surrogate for Iran in its war with Israel, as both money and arms flow through Syria to Hezbollah, in Southern Lebanon in their never ending hostility with Israel.

The current Syrian civil war began in earnest when a 13 year-old boy from Deraa, a town near the Jordan border, scribbled anti-government graffiti. Thirty days later his body was returned to his parents: Knees and neck broken and genitals severed. Not unlike the Tunisian fruit marketer who burned himself when refused a selling permit, the mutilation of this boy lit tinder waiting to be inflamed. Syrians, living since 1962 under the Emergency Law and the unbridled powers of police, were unwilling to let this horror of mutilation be ignored.

What is the future hope of Syrian Christians? Six percent of Syria is Christian (some 1.4 million). Only 20,000 are Evangelical. A Syrian Maronite priest (Roman Catholic) told me at a celebration of a K-12 Christian and Missionary Alliance school in Amman Jordan, that while a priest in Syria he knew of the atrocities of the secret police and ruthless leadership of Assad, yet as Christians they had freedom to pastor, worship and move about. Now with the rebels gaining power, while he applauds their courage, his fear is the Muslim Brotherhood will take power as in Egypt pressing Christians into compliance. Two Syrian Baptist pastors had very different stories: one said only the president could bring stability; the other decried his violence: no agreement.

The short-term danger for Christians is that while they had some protection under Assad, if (or when) he falls and the rebels take over, Christians are at risk. Again the Muslim Brotherhood is the wild card. Christians sit atop a volcano.

As I concluded my time with the Muslim family in their refugee tent near the Syrian border, I asked if I could offer a prayer in the name of Jesus. They smiled and said they would be pleased. I did, praying for each of them and then commending this region and people to the presence and protection of our Lord.

If there was ever a time to pray for Syria, it is now.