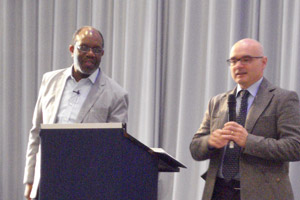 "We must be concerned about justice as God is". This is the summary of what Joel Edwards, International Director of Micah Challenge, told to the Annual General Assembly of the Italian Evangelical Alliance that took place in Catania (Sicily) on 20th-21st April. He was the main speaker of the conference that saw representatives of churches, agencies and missionary organizations gathered together for the annual meeting.

The assembly was also visited by the Mayor of Catania, the president of the Province and the representative of the Governor of Sicily, all giving recognition of the positive role of Evangelicals in society.

This is particularly important giving the traditional prejudice in Italy of Evangelicals being a cult. The Alliance is working hard to change this perspective by encouraging an Evangelical witness which is biblically firm, yet open to co-belligerence and characterized by generosity.

The Assembly was the opportunity to assess what has been done in the previous year, to pray and to plan for the next years. Many delegates stressed the benefit of being involved in the European Evangelical Alliance's Week of Prayer, the Reformation Sunday, and the International Day of Prayer for the Persecuted Church. These events are opportunities for churches to gather together throughout the year, thus nurturing unity and cooperation.

Some standing religious liberty issues were discussed (e.g. a mounting and dangerous phenomenon of places of worship being closed down) which call for attention.

This year the assembly was held in Sicily to encourage the regional EA in its efforts to build bridges and networks amongst Evangelicals.


For more information on the Italian Evangelical Alliance, go to: http://alleanzaevangelica.org/ (in Italian language only)