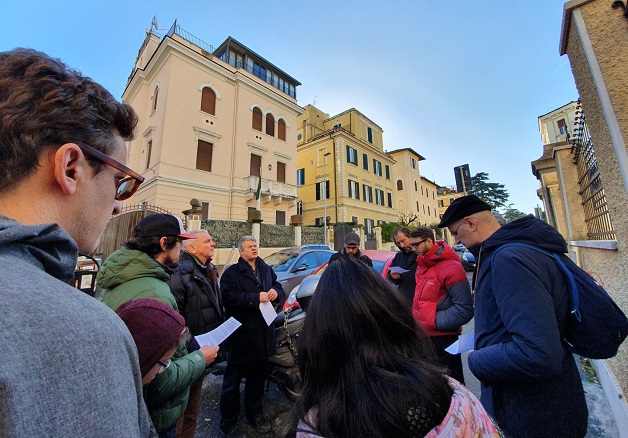 Christians from several evangelical churches in Rome (Italy) gathered in front of the embassy of Algeria on December 14 to denounce the closing of Protestant churches in the Northern African country.

“In favour of religious freedom in Algeria and in support of the evangelical churches in that country” was how Davide Bogliolo summarised the initiative.

The group, coordinated by the Central District group of the Italian Evangelical Alliance (AEI), had a time of prayer and songs in front of the official Algerian representation, at the Via B. Eustacchio street in Rome. Among the 30 participants were also young believers, which had been praying regularly for the situation of Algerian Protestants in their own churches.

LETTER DELIVERED TO THE AMBASSADOR

A letter for the Algerian ambassador was delivered at the mebassy. It read: “The Italian Evangelical Alliance, expression of about 500,000 Italian evangelicals and part of the World Evangelical Alliance which represents over 600 million evangelicals in the world, follows with attention and concern the development of the situation of Christians in Algeria, which in recent years they have seen their freedom of worship severely limited due to a law that has in fact caused the closure of many evangelical churches in the country”.

“As a religious minority in our own country, we know how fundamental and vital this freedom is and how much suffering and injustice has caused the denial of this essential right in the past. We believe that freedom of worship is the basis of an open and thriving society, and in Italy we are active in defending it for everyone”.

“This is why we ask you to intercede with your government to ensure that the freedom of all citizens, regardless of religion, is safeguarded and guaranteed, revising the aforementioned law. We continue to pray for Algeria, its authorities and its people, especially in this delicate historical moment, keeping our vigilance firm”.

Algeria held general elections on December 12, in the midst of protests and calls to boycott. Abdelmadjid Tebboune, a former loyalist of ousted leader Abdelaziz Bouteflika, won the election.

The Italian Evangelical Alliance said it will continue to monitor the situation and support evangelical churches in Algeria.