EXPOSED2013: Mass March of Christians Planned in Zimbabwean Cities in Mobilization Against Corruption 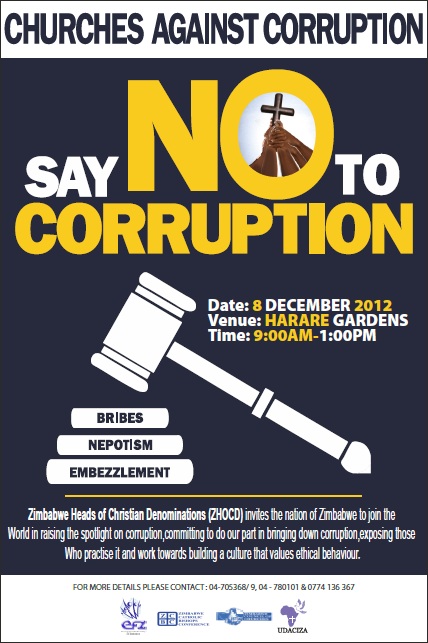 Thousands of Christians are marching on cities in Zimbabwe next week in protest against the corruption that is keeping millions in poverty. Leaders of the country's three largest Christian bodies have signed a letter urging churches to rise up against corruption during a day of action coinciding with the global Anti-Corruption Day (December 9th). The mass mobilisation is part of EXPOSED 2013, a year-long world campaign against corruption.

Dr Shana Goodwill, who as Chair of the Heads of Christian Denominations representing 75 per cent of the nation's Christians, said: "Here in Zimbabwe we will march on our cities to show our anger at corruption. And three of the major bodies have signed a letter urging the church to rise up against corruption. It has to stop. The poor are dying.

"The world church also has a vital role to play. Here in Zimbabwe we are seeing a big campaign between all the three major denominations to stamp out corruption. If Zimbabwe can do it, any country can. We want to send a message to the world. We have a dream. Ending corruption can help the poorest people in the world. The church needs to shine its light in the world and put the spotlight on corruption."

Dr Shana is chair of Heads of Christian Denominations in Zimbabwe (HOCD) comprising the three main Church mother bodies - Zimbabwe Catholic Bishops' Conference, Zimbabwe Council of Churches, and the Evangelical Fellowship of Zimbabwe - representing millions of Christians. He is also a member of the national Anti-Corruption Commission and sits on the Steering Group for EXPOSED 2013 coalition campaign around corruption.

EXPOSED aims to mobilise 100 million Christians by next October and hold a Global Vigil against Corruption on 14-20 October 2013.
EXPOSED 2013 also wants to secure 10 million online signatures to deliver to the G20 in November 2014.

Dr Dion Forster, International Co-ordinator of EXPOSED, said: "These anti-corruption campaigners in Zimbabwe are inspirational their actions will send a message to the rest of the world that enough is enough. We are no longer content to put up with corruption. The world’s poor are eager for us to act."


EXPOSED is a coalition of Christian Organisations that aims to challenge the global Church, business and governments to highlight the impact of corruption on the poorest of the poor.