How Businesses Can Foster Social Cohesion and Protection of Christians

For the first time today, the persecuted Church in Africa became the subject of discussion at the World Economic Forum (WEF) in Davos, Switzerland. With around 260 million people directly affected, the economy and society are also profoundly impacted. The focus of the discussion was on the sub-Saharan region, which has recently rapidly moved towards a state of crisis.

“Businesses and economic leaders have an important role to play in fostering social cohesion, contributing to peace-building efforts, and creating an environment that protects Christians from the increasing Islamist attacks in West Africa,” said Wissam al-Saliby, Advocacy Officer with the World Evangelical Alliance (WEA) and moderator of the panel “More Insecurity in West Africa: Implications for Social, Religious and Economic Conditions” in the “Tradeshift-Sanctuary”, a church that was remodeled for the WEF event. 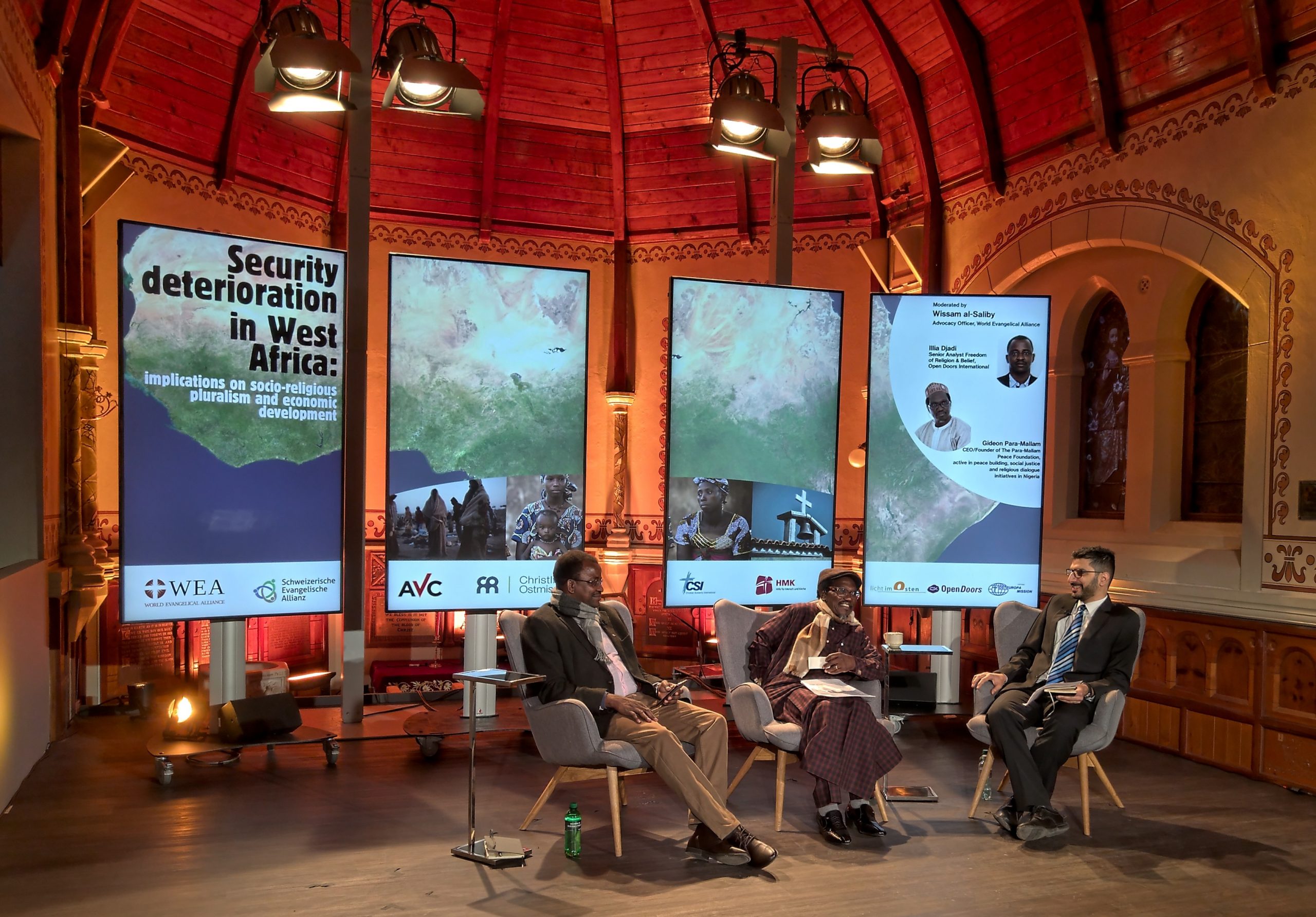 There have been many Islamist attacks, particularly in Burkina Faso, Nigeria, Niger and Mali, but also in other countries of the sub-Saharan region. While there were several hundred attacks around ten years ago, this number rose to 3,500 in 2019 alone. “The attacks have increased significantly,” explains Illia Djadi, journalist and analyst for religious freedom in West Africa.

“The socio-economic impact is huge. These countries are among the poorest in the world. More than 2,000 schools had to close in Burkina Faso and over 300,000 children are left without education. The effect is similar in Mali and Niger. Ethnic and religious groups that used to live together peacefully are instigated against each other. And moderate Muslims have been targeted just like Christians.”

Pastor Gideon Para-Malla, promoter of peace and reconciliation from Jos, Central Nigeria and founder of the “Para-Mallam Peace Foundation” commented: “There are great investment opportunities in Nigeria. We are about 200 million people.” Christians and Muslims lived together as good neighbors. But many Christians have been killed amid the violence and Muslim Fulani militias are extorting protection money. Insecurity has grown due to Boko Haram and ISIS and is destabilizing the economy.

Para-Malla explains that the impunity of the perpetrators has had a devastating effect. “Peace-building is needed as young people are at risk because they want to start defending themselves and seek revenge.” It is important that the world leaders stand by the country and that the government holds the perpetrators accountable. “For years, murders, rapes and kidnappings have been happening on a daily basis. The government must do more. This requires diplomatic influence. The international community must show more interest.”

“In the past, Burkina Faso was known for the peaceful coexistence of religions. With the rise of militant Muslim groups entering from Mali, there are now no-go zones for Europeans. Churches were burned down, pastors and members of the congregations were killed,”  Djadi states. “People are being killed because of their faith.” Instability is growing, and for the first time, Burkina Faso is listed on the Open Doors World Watch List, ranked 28th.

If the country’s development is not supported now, the economically powerful Islamist groups might take over and threaten to destabilize the entire sub-Saharan region. “The situation is grim. That is why we are here,” al-Saliby noted.

Featuring the issue at future WEF’s

The panel in Davos was organized by the WEA and its Swiss member, the Swiss Evangelical Alliance (SEA). Philippe Fonjallaz, vice-president of the SEA’s Religious Freedom Working Group (AGR) and director of Open Doors Switzerland concluded: “It is not only about Christians. It is about a crisis that has an impact on the entire society in these countries. It also destabilizes politics, which can have consequences for the economy and security in Europe.”

SEA General Secretary Marc Jost was impressed by the moving reports from Africa and the opportunity to present this important issue in Davos: “As SEA, we are willing to support the AGR in its efforts to ensure that from now on, religious freedom will be included and discussed at the WEF each year.”

About the WEA:
Over two billion Christians in the world today are represented by three world church bodies. The World Evangelical Alliance (WEA) is one of those, serving more than 600 million evangelicals. Launched in 1846 to unite evangelicals worldwide, the WEA continues to be a dynamic movement with 8 regional and 134 national Evangelical Alliances, and over 150 member organizations. WEA’s mission is to establish and strengthen regional and national Evangelical Alliances, who in turn enable their national Church to advance the Good News of Jesus Christ and effect personal and community transformation for the glory of God. For more info, e-mail [email protected] or go to Worldea.org.