IIRF was co-sponsor of The Second Global Summit on Religion, Peace and Security

Schirrmacher calls for a closer cooperation of the ‘Dialogue-Five-Actors’

The United Nations Office on Genocide Prevention and the Responsibility to Protect (OGPRtoP) under the leadership of His Excellency Mr. Adama Dieng partnered with the Association International for the Defense of Religious Liberty (AIDLR) under its Secretary General Liviu Olteanu to convene the Second Global Summit on Religion, Peace and Security in Geneva 29 April to 1 May 2019. The Summit took place against the splendid backdrop of the Human Rights and Alliance of Civilizations Room of the Palais des Nations in Geneva. This high-level event was well attended by dignitaries, ambassadors and high-level representatives. 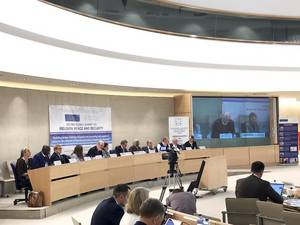 Dr. Liviu Olteanu’s proposal of a Dialogue Five Model for collaboration of all sectors of civil society functioned as a framework for partnership between diplomats, politicians, religious leaders, academics and civil society representatives (NGOs). After input from attendees, the Dialogue Five model was expanded to Dialogue Five+ to include media, business and other potentially relevant sectors of society (e.g. International multilateral organizations).

“This Second Global Summit focused on promoting and protecting the human rights of religious minorities, refugees and migrants, particularly in countries where they have been or are targeted as a result of the discourse of ultra-nationalist political parties and leaders,” announced Dr. Liviu Olteanu.

Schirrmacher, Director of the International Institute for Religious Freedom (IIRF), one of the four official sponsors of the summit, spoke in Panel 5 “Enhancing protection of religious minorities, refugees and migrants. Partnership and cooperation of ‘Dialogue Five Actors’”. He thanked Dr. Liviu Olteanu for puting his concept of the Dialogue Five Actors into practise on a global level. He stated verbatim: 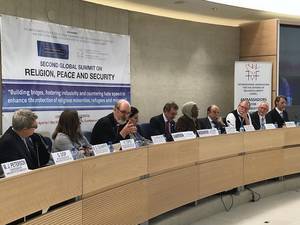 “We should be aware, that enhancing the protection of religious minorities of all kind, refugees and migrants, needs more than good laws or a government wanting it. Let’s think this through for a moment. Take that the diplomats and politicians are in favour of it, but the religious leaders of the majority religion call for protection against these Others, the scholars give religious hatred or racism a seemingly scientific backing and the media warn against minorities, refugees and migrants. It becomes very difficult to enhance protection against the belief of the majority of the people. Or take it the other way round. If religious leaders, scholars and NGOs stand on the side of the vulnerable, but the politicians enact the opposite line, again acting protection becomes extremely difficult. Speaking as a religious leader, I want to point out, that the leaders of a majority religion in a country have the choice between embracing freedom of religion of belief, anti-racism etc. and help to convince their members and the civil society at large, or to become the enemies of such freedoms and make it very difficult to rule the country against the bad will of the majority of people.”

Schirrmacher already had spoken at the First Global Summit on Religion, Peace and Security, which took place in Geneva in November 2016. The First Global Summit focused on fostering religious freedom and preventing violent extremism and atrocity crimes and highlighted the importance of enhancing collaboration among the “Dialogue Five” stakeholder.