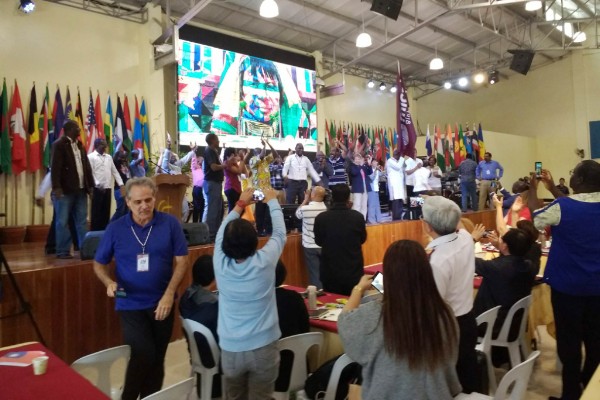 Africa celebrating at the Micah Global consultation in the Philippines a few weeks ago.

Greetings from the Lausanne/WEA Creation Care Network. Whatever part of the world you are in as you read this message, someone in your area, maybe even in your family, is suffering from the effects of the global environmental crisis. We have seen record-breaking rain and floods on almost every continent this year, from the southern US to Venezuela, Greece and northern India. Major typhoons in the Pacific and hurricanes in the Atlantic have caused great suffering from the Philippines and Hong Kong to South Carolina in the US. Even non-environmental disasters like the earthquake and tsunami (and now a volcano!) in Indonesia last week have serious and long-lasting environmental impacts, spilling poisons into the water, soil and air.

We know we need to pray, and many of you are busy with creation care projects of your own. Be encouraged – a global crisis requires local action, and that is what many of you are doing. Your bit matters! [REMINDER: You can use this form to tell us what is happening where you are, so we can know, rejoice and pray with you, and share with others.]

At the same time, one of the values of a global network is the opportunity to meet and to pursue global action together. A few weeks ago many of the world’s climate leaders met in San Francisco, California, at the same time that Micah Global was holding their triennial consultation in Manila. I was not able to go to either of these, but our network was well represented at both of these. Here are two brief reports:

Micah Global (formerly the Micah Network) “is a global Christian community of organisations and individuals committed to integral mission” (https://www.micahnetwork.org), affiliated with the World Evangelical Alliance.

The latest consultation was in Tagaytay, near Manila in the Philippines from 10-14 September 2018 with450 delegates from 68 countries and a healthy balance of men and women, younger and experienced leaders, and majority world and westerners. The vast majority of speakers were non-western, and Creation Care was featured as being at the heart of integral mission.

On the first full day, I (Dave Bookless) gave a plenary address on ‘Resilience, Justice and Creation Care’, challenging delegates that traditional models of developing resilient human communities are pointless unless we have resilient and healthy ecosystems. We need to rethink our model of ‘integral mission’ to see God’s mission – and ours - as including all creation, and not only human wellbeing. Later on the same day, the ‘Renew Our World’ coalition launched a superb new Worship Anthem freely available including the lines 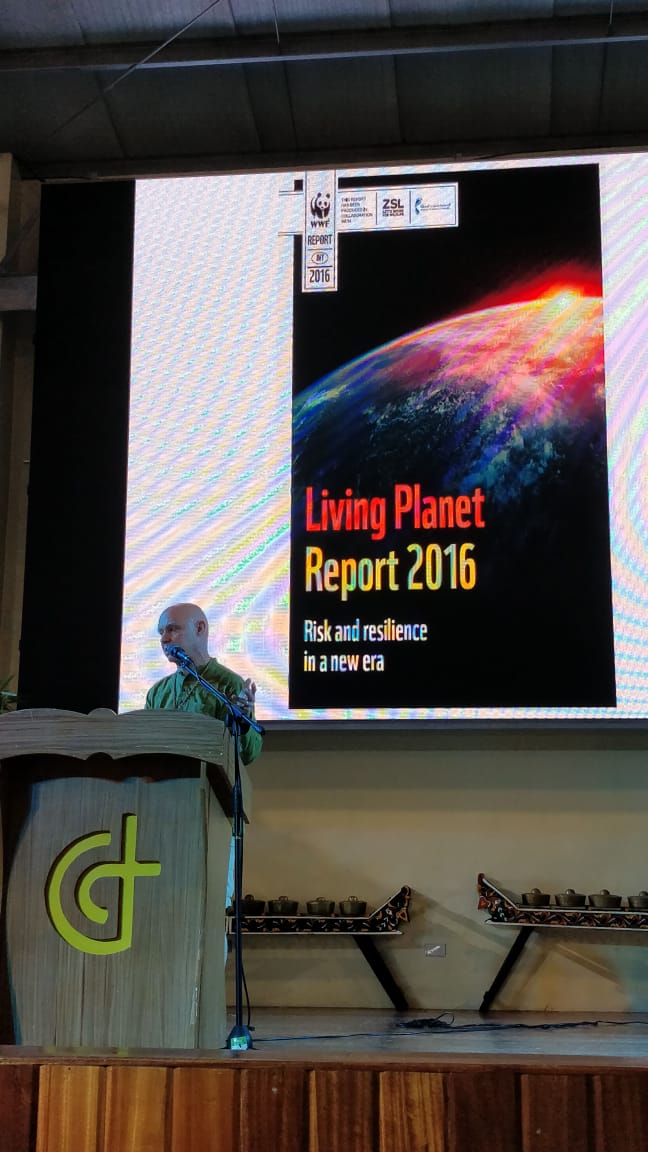 Creation is calling, reaching for redemption
We need you now, Lord hear our prayer
Give us your love, Give us your touch
To meet this world in need, To be your hands and feet
Give us your heart, Give us your eyes
To serve in love and truth, To see the world renewed
Renew our World!

A number of other speakers including Ruth Padilla de Borst and Andre van Eymeren (who have both attended LWCCN regional conferences) spoke about the importance of a gospel understanding for all creation. (Photo left: Dave Bookless speaking at Micah Consultation)

It felt as if the conference marked a step-change in the attitudes of many Christian organizations and individuals. There were significant conversations with a number of major mission and development agencies about how better to incorporate creation care, and requests for resources and partnerships to assist in this. Micah Global itself is planning to redraft its definition of integral mission to include full mention of creation care. It was encouraging that the leadership and drive for integrating creation care came strongly from the global South, from those countries feeling the effects of climate change and environmental disruption and less wedded to western consumerism. (See more of Dave’s thoughts, including a near-miss from Typhoon Mangkhut, here.)

The San Francisco Global Climate Action Summit, held 12-14 September in San Francisco, was planned as a follow up to the Paris Climate Agreement signed at COP 21 three years ago. According to LWCCN member and US Coordinator Lowell Bliss, this conference was significant both because it was global, and because it was planned “before the US elections of 2016, before the US president announced in 2017 his intention to withdraw the US from the Agreement, and before reports in 2018 showed that no industrialized nation is on track to meet its emission targets.”

Each participant was asked to come to the GCAS with an announcement of a major commitment to reduce greenhouse gas emissions.   For example, Bank of the West, a subsidiary of BNP Paribas, announced $1 billion in new commitments to renewable and clean energy. The 73 cities worldwide that are part of the C-40 Network announced plans to achieve carbon neutrality by 2050.

Members of the faith community, including members of the LWCCN, were at the GCAS as delegates, though no faith leaders appeared on stage.  An inter-faith service was organized at Grace Cathedral (Episcopalian) prior to the start of the GCAS, with the same emphases as the main conference. Each faith tradition stepped up to the microphone and read out three or four  “representative commitments” from their groups.  When the Christians spoke, the first slide up on the screen read:

Bishop Efraim Tendero, Secretary General of the World Evangelical Alliance…commits to a vegetarian diet and to power his home with 100% renewable energy. The WEA commits to at least 20% of its global footprint being powered by 100% clean renewable energy within five years.

Bishop Ef has been an active participant in the LWCCN and is passionate about creation care. The WEA, considering its representation, is the third largest historic Christian organization in the world, behind the Roman Catholic Church and the World Council of Churches.  Bishop Ef showed great leadership in personally committing himself and his family to climate action, and through the WEA is inviting all of us to participate in this with him.

Twenty Per Cent Reduction by 2023: The 20.’23 Challenge and Living the Change

The 20.’23 Initiative, as Lowell Bliss describes above, is a commitment by the WEA to reach the target of 20% renewable energy use within the global evangelical community (churches, homes, and institutions) by 2023. This is ambitious, but we think we can do it. If you would like to learn more, or help lead 20.’23 in your country, please e-mail the director of the WEA Creation Care Task force, Chris Elisara, at [email protected] by Oct. 26th.  Soon after that date several conference calls will be scheduled to begin planning and implementation of 20.’23.

The Living the Change campaign is a resource for individuals and churches, especially for those in high consumer countries, to prayerfully and intentionally make sustainable lifestyle commitments that have an impact of climate change, especially at scale.

The latest IPCC report will be released later in Oct., and it is expected to contain sobering news about our warming world.  So what can Christians do about it? We need both massive policy change at national and international levels (that’s what San Francisco was about), and personal behavior change at a global scale. Both are needed to fight climate change, and Living the Change’s purpose is to help each of us consider (and change) our own lifestyle choices.

Bishop Ef’s commitment in San Francisco is a Living the Change commitment. We would like to encourage you to join him, and many of the rest of us, in Living the Change in your own life. Check the website today! If you’d like help implementing this in your own ministry or church context, feel free to contact Chris Elisara by email.

And again, please feel free to contact me or Dave Bookless with questions about the network or reports on things that are happening where you are.

Ed, for Dave and the rest of the LWCCN family