Religious Freedom for Christians in Turkey Restricted Once Again in 2018 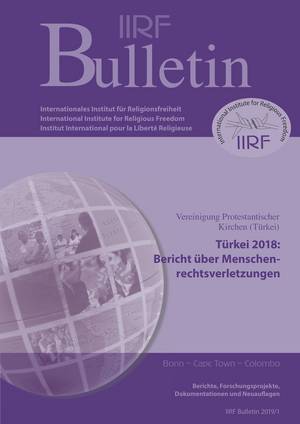 Frequently Christians or congregations were mentioned in the same breath as terrorist organisations, unfortunately also more frequently including names, photos and the like, although Turkey also has a law for the protection of personal data. Many Christians fear from past experience that such verbal attacks will sooner or later result in physical violence again.

In 2018, the difficulties for foreign employees or church members seamlessly continued. Some were expelled or refused entry because their residence permits were no longer renewed. The most difficult case was undoubtedly the months in prison and the trial of Pastor Andrew Brunson, who had lived in Turkey for over 20 years and worked as a spiritual leader of a church in Izmir. The proceedings against him have gone through the international press, but are only the tip of the iceberg.

The expulsion of David Byle after almost 20 years of service in Turkey is also incomprehensible. Over the years, he has always scrupulously adhered to the law, and over the years he has been accused several times, but has always been acquitted. Finally he was accused of living his faith “particularly intensively”, which is not an offence according to Turkish law. Although he has brought an action against the decision of the Turkish authorities, at the moment there seems to be no realistic possibility of returning to the country and to his family, who still lives in Turkey.

In addition to these particular focal points, a number of long-standing issues remained unchanged on the agenda in 2018:

Despite the above mentioned problems, most of the approximately 150 Protestant congregations in Turkey were able to hold their church services and other congregational meetings comparatively undisturbed in 2018. At the end of its annual report, the “Association of Protestant Churches” lists some concrete suggestions for making progress on the issues at hand in the new year. This also includes the central request to the authorities at local and national level to be more ready for dialogue with the representatives of the Protestant congregations: “Experience in this area shows that when the channels of communication are open, many problems are quickly solved.”

The “Association of Protestant Churches” of Turkey has for many years been publishing a report on human rights violations of the previous year. The focus is on Protestant Christians and churches – not because Orthodox or Catholic Christians have no problems, but only because with the limited resources available one can only assess the situation of one’s own congregations seriously and in detail. The annual report is always published in Turkish and English. The International Institute for Religious Freedom (IIRF) takes over the English report and produces a German translation on this basis.