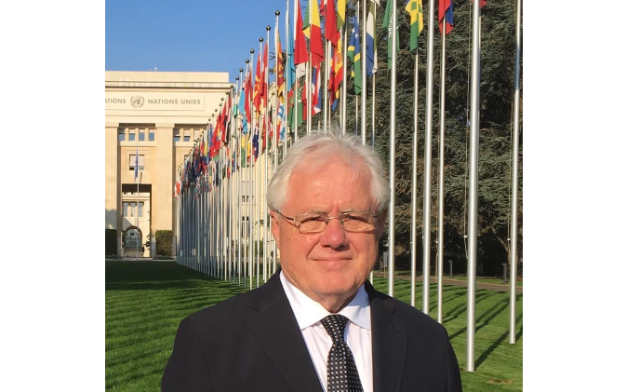 As I walked into the United Nations building in New York to meet Secretary General Antonio Guterres, I recalled a preacher who predicted that this world body was the coming world government, as he said had been prophesised in The Revelation. Added to that ominous prediction of its coming role many view the United Nations as deeply flawed: often biased in its analyses, and lacking ability to muster sufficient authority to mediate armed conflicts such Rwanda. Top of the list is that its body for reviewing human rights, the Human Right Council, is made up of representatives from human-rights violators such as Sudan and Saudi Arabia.

Even so, this is where national governments turn for help in times of humanitarian crises and military debacles flowing from its mandate to promote peace, justice and human rights, even as they are doing today in Syria, Yemen and Myanmar. Here the world community airs it grievances. As a quasi-form of government that encompasses the world, it holds no executive power. Keep in mind that the Security Council’s 5 permanent members has veto powers and can resort to the use of military force yet the General Assembly and the Human Rights Council (HRC) work independently from the Security Council. Because the HRC can’t resort to armed force, countries can refuse to collaborate with their investigations. Even so the Security Council is so conflicted that it would be quite impossible for the members to join together in a world takeover as some allege is a possibility.

As influential as the UN is, it isn’t the only or ultimate source of settling of violations of human rights. While it does have moral and legal authority from its member countries, apart from intervention by the Security Council, it doesn’t have military permission to intervene. It is a meeting place for countries, in which concerns, and recommendations are heard.

With Special Consultative Status, the World Evangelical Alliance (WEA) engages with this body in its vision for human rights and religious freedom. Here Evangelicals have opportunity to voice a defense for Christians and indeed people of all faiths who are violated, marginalized and, at times, martyred for their faith. At the UN, WEA is an extension of advocacy of National Evangelical Alliances, giving them leverage and in opening government doors that would not be possible without a global voice.

After the 20th century global wars, countries worked to create a central talking-place to release the buildup of country-to-country pressure that so often triggers conflict. Eventually the UN became that means and organization. Its history is marked by success and pock-marked by failure. Yet it is a means by which we, with our values and beliefs, can talk with the world.

Approaching the third decade of this century, issues of religious freedom – people under the gun for their beliefs – continue unabated. It is not only appropriate but needful that the WEA exercise our options to be in the marketplace of influence and ideas, bringing to the global public stage an analysis of who is being threatened, whose freedoms and lives are lost, ultimately serving our member alliances and being their voice to this world audience.

Two main locations of the United Nations
New York is where diplomats discuss global affairs, peace and security. Geneva is where human rights are the primary focus. In both cities, the essential work is to build connections to ambassadors, especially while the UN is in session. These contacts provide means of private conversations with ambassadors who would not otherwise hear our stories, concerns, or ideas.

Geneva is the main center of activity for human rights. The trigger is the Human Rights Council, created in 2006 to replace the Human Rights Commission. At the same time in 2006, the U.N. established the Council’s flagship human rights accountability mechanism, the Universal Periodic Review (UPR).  Each country is required every four and one-half years to undergo a public dialogue on their human rights record, explaining what they are doing to implement their international commitments.

Because WEA holds Special Consultative Status,  its staff has authority to both inquire on the many issues surrounding human rights and to address restrictions on the right to freedom of religion or belief, and religious discrimination and persecution. Many organizations are active in making known these issues, but WEA’s role is to represent National Alliances and to engage with leaders, working hand in glove with public agencies who voice their concerns and analysis.

Why does this matter?
Simple numbers have a way of answering that. In 1960, there were 90 million evangelicals. Today there are over 600 million. And within those countries where there has been the greatest growth there is often the most rampant violations of religious freedom. While people of all faiths are at times persecuted, Notre Dame University in their report, In Response to Persecution, estimates that Christians are in the majority as victims of religious violation.

Two points of rationale surface: first, with Evangelicals now being the second largest group of Christians in the world (after the Roman Catholic Church), we have a responsibility to be active in ways that our global population never before demanded. Second, Evangelicals now recognise that matters of justice concern the heavenly Father. If he loves justice, we should too.

What successes are there?
Influencing a nation to modify its behavior or change its laws is difficult. Yet that is what we seek to do. However, to tell specific stories of successes or failures would violate trust built up over years with representatives from countries often controlled by dictatorships.

One night in New York over dinner with an ambassador from a closed country, we exchanged stories of faith. I offered some books on faith which were received with evident delight. Did that relationship end up in Christians being freed or laws being modified? Even if they were, we wouldn’t take credit for it, nor divulge our relationship.

Churches have been opened after being shut down because of our persuasive and persistent appeals. Pastors and missionaries have been set free through our personal intervention with a senior government leader. Proposed legislation to curtail religious freedom was not passed, after our personal mediation, and pastors in a closed country felt emboldened and secure to speak up against discrimination because they knew their voice was being relayed in Geneva. We know that the prayers of God’s people have enormous effect as his “Divine conspiracy” penetrates and upends plans made to obstruct the Gospel story.

The U.N. Secretary General told us of his earlier days in Geneva and his appreciation for the WEA staff in assisting worldwide revelations of the human rights abuses. He ended with a plea for us to ramp up our work in pressing for the rights of people, Christians as well as others. He said our credibility given our world population, puts us in an important place of public advocacy.

This kind of work in difficult places is not described by most seminaries as the kind of place the Lord might lead you in a calling. Yet I suspect that Queen Esther’s careful engagement with public officials was not unlike what is required today: to be an agent of change.

Inserting our lives and witness into the workings of the United Nations is strategic and Spirit led. Our witness is embedded in God’s love and justice, and our service is empowered by his Spirit. Justice flows from the throne room of God.