The World Evangelical Alliance and Caritas Internationalis congratulate the Plateforme des Confessions Religieuses de Centrafrique and its leaders, the President of CAR’s Evangelical Alliance, Rev. Nicolas Guérékoyamé-Gbangou, the Catholic Archbishop of Bangui, Cardinal Dieudonné Nzapalainga, and the President of the Islamic Council in CAR, Imam Oumar Kobine Layama, for receiving the Eliasson Global Leadership Prize in recognition of their work to overcome religious and civil strife. 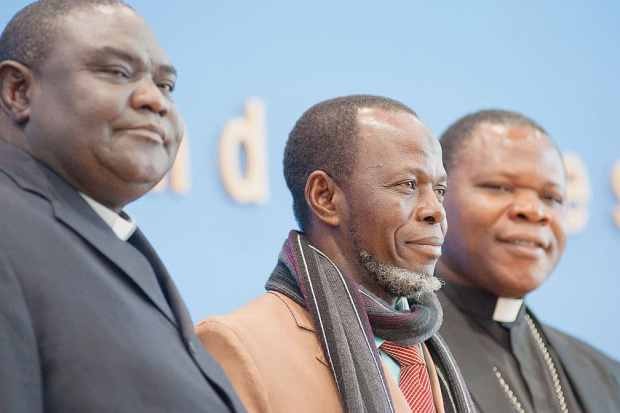 The prize is named in honor of renowned Swedish diplomat Jan Eliasson, who was Deputy Secretary-General of the United Nations from July 2012 to December 2016. Out of 820 nominations from more than 130 countries, a jury composed of global leaders voted to award the prize to the Plateforme, known in English as the Interfaith Peace Platform of the Central Africa, and to two other prize winners – Sharmeen Obaid-Chinoy, a Pakistan-based filmmaker, and neuroscientist Rafael Yuste.

The jury chose the three Plateforme leaders “because they are demonstrating that deeply rooted moral leadership can overcome the divisions of tribe, ethnicity and religious identification in the name of our common humanity.” The laureates will be honored at in Mexico City on November 15. Each of the three prize winners, the Plateforme, Ms. Obaid-Chinoy and Mr. Yuste will receive $50,000.

Since the start of the crisis in 2013 in the Central African Republic, the Platforme brings together the leaders of the Catholic, evangelical and Muslim communities. The Platform seeks to find ways and resources to contribute to the resolution of the crisis with its leaders providing an example of how religion can serve as a tool to identify values of order, love, fraternity and the protection of human rights.

The Platform gained international recognition over the past years. Time Magazine named the three clerics leading the Platform among the 100 Most Influential People in the World in 2014, and the French newspaper Le Monde called them in 2013 “the three saints of Bangui.”

While the situation in the Central African Republic remains tense, the World Evangelical Alliance and Caritas Internationalis lift the Platforme members in prayers, so that they remain agents of peace and reconciliation in their country.

Learn more about the prize winners at https://eliassongloballeadership.org/.