Recently, ten elder statesmen of Evangelical theological education, came together in Schmitten, near Frankfurt, to establish Re-Forma, which has now been legally listed in the roll of the Court in Bonn, Germany. 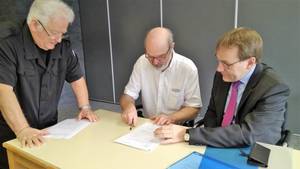 “The biggest crisis facing the evangelical, global church today is the fact that most pastors, missionaries, and Christian leaders are under-educated or not educated at all,” says newly elected chair and the initiator of Re-Forma, Dr Manfred Kohl. He adds: “Studies show that over 90% of all pastors do not have a formal theological education. According to statistics, that equates to well over 2 million Protestant pastors worldwide. In addition, every year thousands of new Protestant churches are established, very often without a trained pastor or preacher. Re-Forma has set as its goal to fundamentally remedy this situation.”

Dr Reuben van Rensburg, who recently retired from being Principal of South Africa Theological Seminary and has been appointed the Project Director of Re-Forma, explained: “Re-Forma is responding to the crisis of insufficiently trained church leadership. It provides recognized benchmarks for informal and non-formal biblically-based ministry. It is based on outcome- and impact-based assessment. Re-Forma will not do the training itself but will cooperate with many global and regional organizations engaged with non-formal theological education. We will provide the framework for a standard outcome assessment that is valid globally. Re-Forma plans to award a Certificate underwritten by the World Evangelical Alliance.”

“Of course we will get younger men and women involved very soon, but at the outset we are long-term educators on the highest level, who want to give credibility to a global education initiative for those who will never attend established schools which provide formal theological education,” said newly elected vice-chair, Thomas Schirrmacher, Associate Secretary General for Theological Concerns of the World Evangelical Alliance. “Re-Forma has already been a partner of the Department for Theological Concerns, but now I welcome its legal form into this department here in Bonn.” The legal entity is registered in Bonn, where the Department for Theological Concerns of WEA is seated. Bonn is also one of the hubs of WEA and hosts the office of the European Evangelical Alliance.