Thousands Learn About Politicians' Promises to Help the Poor - While Dancing

MORE than 2000 people learned about their politicians’ failure to keep promises to the poor made in 2000 – during a musical event. 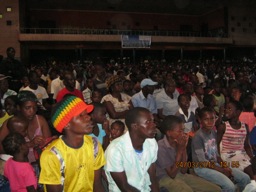 Micah Challenge, joined with local churches in Mutare, eastern Zimbabwe, to host a musical concert that helped highlight the plight of the poorest people in the nation. Organisers staged the event to make locals aware of the Millennium Development Goals (MDGs) - promises made in 2000 to halve poverty indicators like hunger, maternal and infant deaths, lack of clean water and sanitation and preventable diseases. The event was held amid fears that the country is unlikely to eradicate extreme poverty and hunger by the MDG deadline of 2015.

Micah Challenge is currently mobilizing Christians with campaigns and events in dozens of nations across the world – inspiring local people to take up the challenge of holding politicians to account on their promises. Amanda Jackson, of Micah Challenge, said: “This was an inspirational event held by people passionate about the poor and eradicating poverty. Not only were people enjoying themselves but they were learning about poverty issues and how churches are responding. They were also made to realise that politicians made promises in 2000 and they have to keep them. Millions of lives depend on these promises being kept.”

MDGs are an eight-point roadmap with measurable targets and clear timelines for improving the lives of the world's poorest people, agreed on at the United Nations General Assembly in September 2000 by 189 world leaders. But nations, such as Zimbabwe, are lagging behind on many of the indicators.

At the packed musical, top quality music from Blessing Shumba and other bands drew an all-age crowd to dance. The Head of the Evangelical Fellowship in Zimbabwe, Rev Lindane Dube told the crowds that the church “may have been sleeping for some time” but now wanted to take the lead in advocating to meet the MDGs. He said: “The concert in Mutare demonstrates the commitment of churches from many backgrounds to speak together to give every mother a healthy birth and every baby the chance to survive past five.”

Peter Bare, Micah Challenge Coordinator in Zimbabwe, said: “The local government’s Provincial Director for Health spoke about MDG issues facing families. He admitted that major issues like lack of adequate finances, the lack of a skilled workforce and lack of commitment from the workforce are barriers to MDG progress. He urged church women’s groups to be involved in holistic programs for mothers. We are proud that Women’s Committees in the area took a major role in organising the event.”


Micah Challenge, an initiative of the World Evangelical Alliance, is a global movement active in over 40 countries whose aim is to encourage Christians to be committed to the poor, and hold governments accountable to the Millennium Development Goals, signed by 189 countries in the year 2000 which committed to halving world poverty by the year 2015.