Un-Capturing Religion in South Africa: Sober Suggestions at Conference on Abuse of Religion and Gullibility

“The South African government must regain the trust of the religious communities. Wisely choosing the next Commissioners for the Commission for the Promotion and Protection of Cultural, Religious and Linguistic Rights (CRL) is crucial for that. The actions and attitudes of the Commission in the past five years have drastically lowered its credibility in the eyes of most religious communities.” This was the core message of Professor Dr. Christof Sauer at an academic conference conducted on 6–7 March in Pretoria on “Abuse of religion and gullibility of the public in the democratic South Africa” organized by the College of Human Sciences of Unisa. 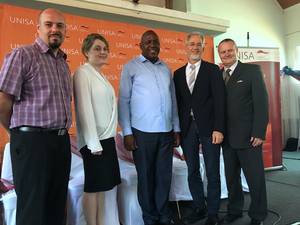 In his keynote address on the second day, the co-director of the International Institute for Religious Freedom – which has an office in Cape Town – responded to the announcement that the postponed interviews for the new CRL Commissioners would now be held on 11 and 12 March. The five year term of the past Commissioners had ended on 28 February.

Sauer emphasised five characteristics that could ensure a better future of the CRL. He contrasted this with his observations about the approach the CRL has adopted in the past. “It has been trying to deal with problems caused by a minority of self-appointed, self-serving individuals pretending to be pastors or prophets with miraculous powers. But the approach of the CRL has actually caused greater problems. Some of the proposed measures would actually lead to unconstitutional restrictions for bona fide religious communities”: 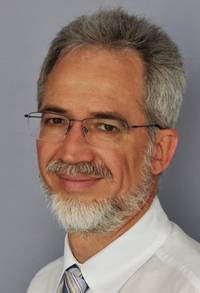 “Firstly, the CRL is mandated to be the best friend and defender of the rights of religious communities … a friendly attitude must characterize the commissioners and the commission. Second, a commitment to presenting honest facts is required … thorough evidence and documentation leading to sober conclusions is indispensable. Third, … the CRL must be empowering (and) facilitating. Fourth, full transparency and open process is required for the CRL dealing with religious communities. Fifth, the CRL needs to allow diverging opinions within the CRL Commission itself as well as competing interpretations and narratives in civil society. The CRL must not be dividing the religious communities but has a mandate to foster unity in diversity.”

The scholar, who also holds professorships in Germany and Belgium added: “In light of this troubled history … it seems essential that a completely new set of CRL commissioners be appointed. Only a new commission will enable a new start, untainted from past flaws in procedure and attitude”. He concluded: “If these new commissioners personify the characteristics presented above, I have hope for a better future of religious communities in South Africa. The South African Government and the ruling party, the African National Congress, in appointing the next Commissioners, must show their cards, whether the pursuits of the previous CRL Commissioners were actually the agenda of the Government and the ANC or not. People at the grassroots and religious communities might not distinguish this otherwise.

The CRL Rights Commission is a unique and helpful instrument to promote and protect the rights of cultural, religious and linguistic commuties. However, it must be un-captured from controlling agendas.” 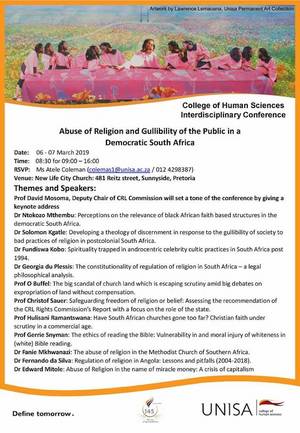 At the Unisa academic conference in Pretoria attended by 90 academics and pastors, the CEO of the CRL, Mr. Tshimangadzo Edward Mafadza, had given the keynote on the first day on the CRL Commission’s report on “the commercialization of religion and abuse of people’s belief systems”.

The CEO defended the proposals of the CRL of compulsory licensing and registration of all religious organizations and religious practitioners. He claimed that together with the enforcement and tightening of existing legislation, these proposals would “ensure the right to freedom of religion”.

Two affiliates of the International Institute for Religious Freedom (IIRF) also spoke at the conference.

Dr. Georgia du Plessis, from the Catholic University Leuven in Belgium, deemed the elaborate hierarchical “Peer Review Structure” proposed by the CRL unconstitutional as it would elevate the status of the CRL to that of final arbiter in matters of religion in the country.

Dr. Fernando da Silva, the Director of the IIRF Observatory for the Community of Countries of Portuguese Language, reported on lessons and pitfalls in regulation of religion in Angola. Since the implementation of an inter-ministerial decree in November 2018 on one-month-notice, previously accepted umbrella bodies of churches were disbanded, and over 4000 de-registered churches that no longer met the minimum threshold of 100,000 members were closed in heavy handed police action. Da Silva recommended not to mix culture and religion when discussing matters of regulation of religion in South Africa. He considered it preferential if Freedom of Religion or Belief would be pursued by a separate entity of government.