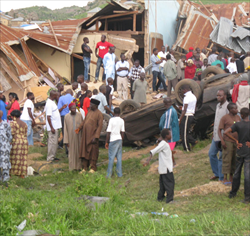 June 3, A suicide bomber detonated explosives at the gate of the Living Faith Church in Bauchi, Nigeria, as members were leaving after the morning worship service, killing at least 10 and injuring 20 people.

The explosion also damaged the nearby Harvest Field Church.

In a media report an eyewitness said, "Security agents who were within the vicinity of the 2 churches tried to force the suicide bomber to stop at a security checkpoint, but the bomber crashed his car into the gates of one of the 2 churches, the Living Faith church, killing many people and injuring many others."

In separate attacks on 9 June, another suicide bomber detonated explosives at Christ's Chosen Church of God in the Plateau state killing at least 2 Christians and injuring more than 40. Also in the state of Borno, 2 Christians were shot dead at a church during a Sunday worship service.

The Islamic extremist group, Boko Haram has been suspected to have carried out the attacks. The group is said to be responsible for killing at least 530 people this year alone. Furthermore it is reported that Boko Haram destroyed over 350 churches in 2011. 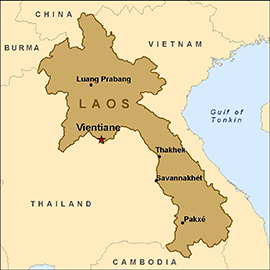 June 9,  It is reported that a pastor in northern Laos was detained on charges of "attracting people to the Christian faith". Reports suggest that the arrest is part of a wider crackdown on evangelism in the area.

The pastor (53) was arrested on 6 June, at his home and then transferred to the Luang Namtha provincial prison, which is some 50km away from his home in Peeyur village.

The arrest comes a week after Lao authorities released 6 Thai Christians who were detained on 24 March on similar charges.

In a media report, an official of an advocacy group working in the area stated "Local church leaders strongly believe that the Lao government wants to eliminate Christianity in the Luang Namtha province and other areas in Laos."

Intimidation against Christians continue to worsen in IRAN

June 11,  In a wave of intimidation against Christians and churches, authorities in Iran are reportedly targeting the officially recognised small number of Protestant churches and the house church movement, raising widespread concern about the safety of Christians in the country.

In early May, leaders of the Assemblies of God church in Tehran were ordered by the Ministry of Intelligence to submit the names and ID numbers of all members. The church has long been under surveillance and the latest is likely to result in it being even more difficult for those from Muslim backgrounds to attend the church.

It is also reported that more than 20 Christians remain imprisoned across Iran.

On 24 May, a Christian couple who were presbyters and teachers at Immanuel Evangelical Church were arrested following a raid on their home by security authorities. Their whereabouts remain unknown.