On 19 August, Pakistani police arrested a mentally disabled, 11 year old girl after she was accused by a mob of desecrating the Quran. It is reported that the mob demanded the Christian girl's arrest and threatened to burn down Christian homes in the area. 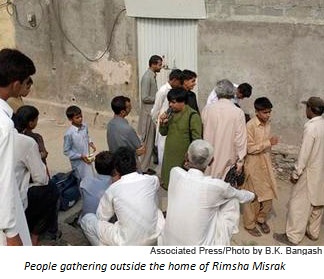 According to reports, Rimsha Misrak, who has Down syndrome, was found carrying a waste bag which had pages of the Quran. The girl's parents were taken into protective custody following the incident whilst other Christian families have fled the area.

However the day following the arrest, a mob consisting of around 600-1000 people torched several Christian homes, demanding that Rimsha Misrak be burnt to death as a blasphemer.