World Evangelical Alliance (WEA) Secretary General Bp Efraim Tendero met with United Nations (UN) Secretary General António Guterres at the UN Headquarters in New York to talk about their shared concern for human rights, religious liberty and social issues. Serving some 600 million evangelicals in more than 120 countries and holding Special Consultative Status in the Economic and Social Council of the UN (ECOSOC), the WEA has been engaged with a number of UN bodies and agencies for many years. 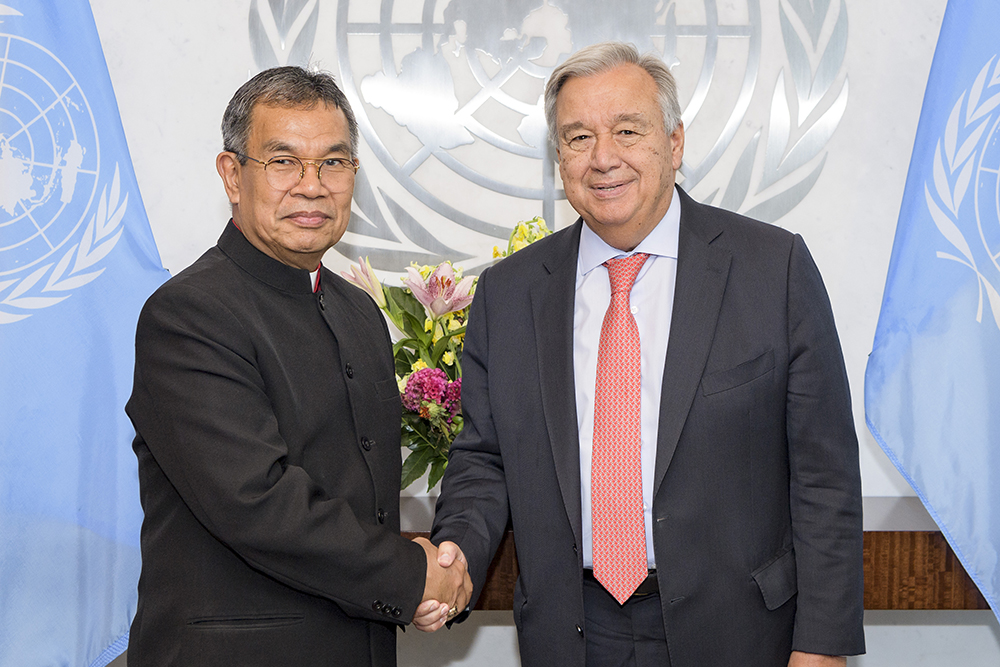 Welcoming Bp Tendero and a delegation from WEA at his office, Mr. Guterres expressed his appreciation for WEA, which he personally became more aware of when he previously served as the UN High Commissioner for Refugees from 2005 to 2015 in Geneva, Switzerland. The WEA’s Geneva Liaison Office that works with regional and national Evangelical Alliances is known there for providing detailed grass root-inspired reports as part of the Universal Period Review process where each UN member state’s human rights record is reviewed every few years. Mr. Guterres also acknowledged the role that evangelicals played in serving the needs of refugees coming to Europe.

Noting that in the two years since Guterres’ appointment, the UN head has faced global issues of war, famine, human devastation and hostility among many states, Bp Tendero commented that Mr. Guterres has often provided the world with a careful and measured response, bringing to the many players a thoughtful plan to override our human propensity to violence.

Bp Tendero told of his own experience in the Philippines when in a critical moment in Mindanao, he challenged the parties, both the government and the Moro Islamic Liberation Front to “try peace instead.” He expressed to Mr. Guterres that as a global body of evangelical Christians “we affirm our commitment to inter-faith dialogue and peace building.” “After all,” he said, “Jesus provides not only the model of peace, but by his very presence and power, induces in the hearts of us an inclination to follow him and not our own self-interest.”

Bp Tendero went on to share some updates on WEA’s ongoing concern for Christians whose rights are being violated and how WEA’s Religious Liberty Commission responds to such issues. He also outlined the work of WEA’s Human Trafficking Task Force and the collaboration with both Christian and civil society groups, especially in countries where young people are trapped by modern forms of slavery, such as prostitution.

Finally, Bp Tendero also shared about the plans for the upcoming Jesus Global Youth Day, which will be celebrated in August 2019 in Manila and is scheduled to coincide with the UN’s International Youth Day. He said that those gathered will be mobilized to adopt certain agenda items of the UN’s Sustainable Development Goals (SDGs).

Dubbed the “blueprint to achieve a better and more sustainable future for all”, the UN says the SDGs seek to address “the global challenges we face, including those related to poverty, inequality, climate, environmental degradation, prosperity, and peace and justice.” In order to achieve those, Bp Tendero pointed out the need for and power of prayer and expressed WEA’s commitment to pray and also encourage evangelicals around the world to join hands in responding to the specific needs prevalent in their own neighborhoods.


Learn more about WEA’s engagement with the United Nations; WEA’s work with the UN’s Universal Periodic Review process in Geneva; and a list of recent reports on national human rights and religious freedom situations.