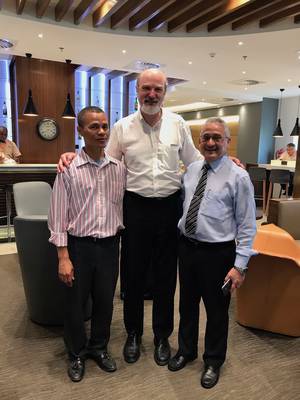 In Maputo he met Pastor Luís Manuel, who is the main pastor of the largest evangelical church in Mozambique, the 2500-member Assembly of God church in Maputo. Pastor Manuel also presides over the denomination of the Assemblies of God in the country, which includes 1.4 million believers. He also coordinates the efforts of the ‘Evangelical Forum’ to begin an Evangelical Alliance in the country.

Schirrmacher also learned about the situation after Cyclone Idai and Cyclone Kenneth, two of the strongest hurricanes ever in this region of Africa. Coming from Addias Ababa, Schirrmacher had been able to observe out of the plane the severe consequences of the cyclones in Malawi, Zimbabwe, and Mozambique. The international relief organization Giving Hands in Bonn, which he founded, had flown large quantities of medicine and food by helicopter to 14 cut-off villages after the cyclones.

In mid-March Hurricane Idai hit Mozambique with full force. Even today, many districts of Beira, a city with 500,000 inhabitants, still have to live without electricity. In addition, the people have no fresh water. The biggest challenge at present is the spread of the diarrhoea disease cholera. The cyclone caused more than 500 deaths, making it one of the deadliest hurricanes ever to hit the southern hemisphere. In addition to large-scale power cuts, torrential floods, and dangerous landslides occurred. It is estimated that over 500,000 people have lost their homes.

In addition, Schirrmacher was informed about the sluggish spread of the Bible in the north of the country, organized by Prof. Dr. Fernando da Silva, Deputy Director of the Religious Liberty Commission of the World Evangelical Alliance. There, many pastors still have no Bible of their own. 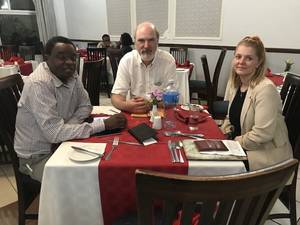 In Eswatini, Schirrmacher met with the Secretary General of the Evangelical Alliance (Swaziland Conference of Churches), Rev. Themnba Ngozo, and several bishops and leaders of denominations. The Alliance is chaired by Bishop Stephen Masilela, bishop of the Church of God of Prophecy and Africa representative of its international leadership.

In Lesotho, he met with the Secretary General of the Association of Churches of the Evangelical Movement, Rev. John Maphephe, and its President, Bishop Dr. G. L. Lejakane, Director of the Full Gospel Church in Lesotho.

In Lesotho and Eswatini, among other things, it was also a matter of preparing visits to the respective king and prime minister.