Crushed by foreign occupation (1910-45) then defended by the US, this southern part of the China peninsula rose from the rubble of the 1950′s war into a showroom of industrial capitalism.

Seoul is spectacular. Sprouting the usual fare of high rise building, I was struck by their creative variation. Streets lined by late autumn trees of orange and red show off a city modern while quaint with a memory of its past. What is overwhelming is its great economic leap forward — in stunning contrast to its cousins to the north.

I’m not blind to the soft underbelly of material success. Poverty exists here. Sorrow over inability to reunite with family to the north, too is a powerful undercurrent, shaping polices and energizing movements for reunification. Success comes with its own set backs.

What is surprising is the night glow of crosses that dot the city evening landscape. Christian faith is neither ridiculed nor rejected. It — like reuniting with families caught in the web of North Korea’s paranoia and seclusion — is core to the story of this little nation that defied the odds of post war politics, rejected the central planning of socialism and turned away from western secular inclinations. 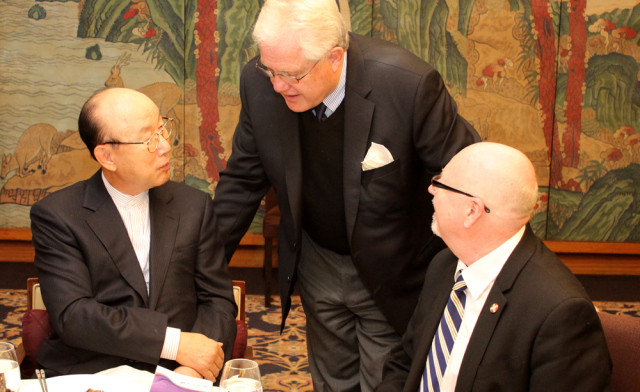 Sharing dinner with Rev Yonggi Cho, pastor of the world’s largest church (somewhere around half a million members) Yoido Full Gospel Church, was a privilege. Not because of size or his world influence, but an opportunity to speak with one who embodies the rise of a nation and became a voice of faith that inspired millions to serve at risk and price.

In less than six decades, this modest nation leapt to the front in missions. Recipients of foreign mission input, they moved out around the world. This year they will send out 1,100 long term missionaries, as many as all the Western churches combined. It is estimated there are 20,000 long term Korean missions active somewhere in the world. A goal set is to have 100,000 by 2030.

Roman Catholics arrived in 1603 and in 1801 paid for their witness with their lives. Protestant arrived (primarily Methodists and Presbyterians) in the 1880s. Differing from religions of China and Japan, Korean religion viewed God as monotheistic, a Creator God called Haneul-nimwan-in. Today some 30% (of 50 million) confess Christianity as their faith.

During occupation, seven million Koreans were either deported or killed. Rejecting calls to worship the Japanese Emperor, pressure of assimilation (including, required to speak another language and prevented from speaking their own) drove Koreans to embody Christian faith to save themselves and their nation, thus forging faith and nationalism as mutually reinforcing partners. Christian faith became friend and enabler.

Before the Korean War (1950-1953) over 60% lived in the north but many fled to the south to escape the Communist forces. During the war, churches organized chaplains to serve in the armed forces. Soldiers who turned to faith became a base of Christians who served in the evangelism explosion of the last few decades of the 20th Century.

The Korean church is not without its challenges. In a competitive society, those strains stretch relationships. Estimated to have 150 Presbyterian denominations, extrapolate that to other denominations and the potential of multi lines of division are obvious. As well, the attaching of faith to nationalism builds into the practise of faith a politicization that divides people on politics.

Observe the convergence of history, experiences, theology and world events: they were a people schooled in a religion, with a mono-theistic base, which one could argue, predisposed them to the Christian God. Humiliated and subjugated by her occupiers, when liberated by the “Christian” West, their affiliation was naturally to the faith of their liberators. Hard working and determined, when freed from threat of Communism, and provided with working capital, their export products exploded. Today be it Hyundai or Samsung, their market skills take a back seat to no one. This vision for the world provided a model for evangelism: if you could take on the world in business, there is no reason you couldn’t do the same in missions.

Korea is a prototype of emerging countries. Lifted by the dynamic of faith, they are a new center of vision and mission. The center of world witness in the 1800s was the United Kingdom/Europe. In the 1900s that moved to North America, now having shifted to the global south.

The Apostle Paul heard from Macedonia, and crossed the great geo/political divide so Europe would hear the Gospel. Today, it is the “Koreas” the Spirit is calling to break into closed and hostile cultures with the transforming message of our risen Lord.