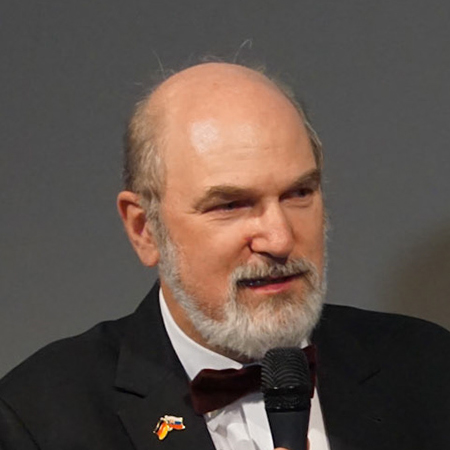 Archbishop Prof. Dr. theol. Dr. phil. Thomas Schirrmacher, PhD, DD, (born 1960) is since 2021 Secretary General of the World Evangelical Alliance, which represents Protestant churches belonging to 143 National Evangelical Alliances with altogether 600 million members. He is also President of the International Council of the International Society for Human Rights. Till 2021 he was Associate Secretary General for Theological Concerns (Theology, Theological Education, Intrafaith and Interfaith Relations, Religious Freedom, Research, and director of the International Institute for Religious Freedom (Bonn, Cape Town, Toronto, Colombo, Brasilia), the largest research network for religious freedom and against persecution of Christians and other religions and world views.

Schirrmacher is extraordinary professor of the sociology of religion at the state University of the West in Timisoara (Romania) and teaches human rights and religious freedom at Oxford University (Regent’s Park College). He is also founder, meanwhile the President Emeritus, of ‘Martin Bucer European Theological Seminary and Research Institutes’ with campuses in Berlin, Bielefeld, Bonn, Chemnitz, Hamburg, Innsbruck, Istanbul, Izmir, Linz, Munich, Pforzheim, Prague, Sao Paulo, Tirana, Zurich, where he tought social ethics and comparative religions. Schirrmacher has given guest lectures at more than 200 universities and institutions around the globe in most any major country in the world.

Schirrmacher regularly testifies in Parliament, in High Courts, and at the United Nations and OSCE, e.g. in the German parliament (Deutscher Bundestag), the House of Lords, the EU Parliament, the US Houses of Representatives or the Supreme Court of Brazil.

Schirrmacher is also presiding Bishop of the ‘Communio Messianica’ with congregations in 75 countries of the world. As Bishop he has visited and worked with most of the heads of Christian churches, as well as leaders from all world religions. He met the old as well as the new Pope, the Ecumenical Patriarch as well as many other patriarchs on behalf of religious freedom. The German major newspaper ‘Die Welt’ calls him one of the three leading experts on religious freedom globally and “Pope Francis’ most loved Protestant”. He is known for his role in the five years process leading towards the first ever joint statement by the Vatican (PCID), the World Council of Churches and World Evangelical Alliance on world mission and human rights, published mid 2011.

Beside his honorary doctorates he received several other honours. In 2002 he was named ‘Man of Achievement’ by the International Biographical Center Oxford for his achievements in the area of the ethics of international development. 2007 he received the Franz-Delitzsch-Award for his dissertation on Hitler and in 2008 the International ProFide Award (Finland) for advocating human rights and religious freedom worldwide, especially for refugees from Iraq. 2016 he received the Order of Merit of the Royal House of Ghassan (Jordan/Lebanon) and 2017 the Stephanus-Price for Religious Freedom by the Stephanus-Foundation (Frankfurt).

A German will soon represent 600 million Christians as Secretary General of the World Evangelical Alliance: Thomas Schirrmacher. He has been involved on the big stage of politics and religion for decades. He will be inaugurated into his new office on February 27.

Anyone attempting to describe Thomas Schirrmacher in brief terms can only fail. He is a theologian, sociologist of religion, cultural anthropologist, author, human rights expert, and bishop. He has written more than 100 books, four doctoral theses and a seven-volume series on ethics, and he has served as rector of the Martin Bucer Seminary. That alone would be enough to fill a particularly committed academic life well into retirement.