‘A clear evangelical identity strengthens our dialogue with society’ 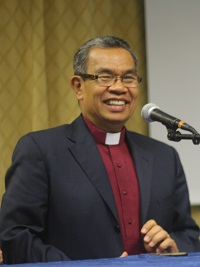 In a session after dinner, Efraim Tendero briefly outlined his convictions. He started giving  some details about his first year leading the World Evangelical Alliance (WEA). He expressed his desire to listen and understand the reality of evangelical Christians in different countries and cultural contexts. [Bishop Efraim Tendero commented more on this idea in an exclusive interview he gave to Evangelical Focus, which will be published in the coming days.]

Tendero referred to his visit to Israel (March 2016) and the talks he had with government officials to propel the “full recognition” of evangelicals - churches are not allowed to register their own marriages there, among other limitations. When asked by a Jewish religious leader to stop all forms of mission towards Jews for a period of time, Tendero answered: “If we stop sharing the gospel, we stop being evangelical Christians”.

- “We believe in the authority of the Bible as the Word of God.

- We believe in God in three persons.

- We believe in the divinity of Jesus Christ.

- We believe in salvation only through faith in Jesus Christ.

- We believe in the centrality of mission in the Church.”

“This five points make us evangelical Christians”, Tendero concluded, and this is why “Roman Catholics cannot be considered as evangelicals.” They have a “tradition which is added to the Bible and they believe in the merits [for salvation] besides of Jesus.”

What about the differences ‘inside’ Evangelicalism? “One of the obstacles to the expansion of the Gospel is the lack of unity among evangelicals”, Tendero said. “We do not have a Pope, we have the priesthood of all believers, under one head which is Christ. The WEA is the visibilisation of the unity of evangelicals.”

Nevertheless, “at times it seems that every evangelical church has its own Pope”, he added with irony.

THE NEED FOR UNITY AMONG EVANGELICALS

On Saturday, the WEA Secretary General opened the sessions again. Following th reflection of the day before, he shared three foundations for the unity among evangelical Christians: “the triune God demonstrated it, the nature of the Church dictates it and the magnitude of the task (the mission) demands it”, he said. “A friend says that if we are not able to work together, we are like two ants fighting each other to see who eats the elephant.”

Tendero called to “concentrate on agreement”, searching the “shared purpose and the common denominators” all evangelical churches have. This implies, as Jesus said, to “die to one self.”

Working together can happen on different levels, be it through simple networking, through collaboration or even organisational union.

There is a “mission unity in the WEA”, based on “the fellowship in the Gospel, the defence and confirmation of the Gospel and the furtherance of the Gospel”. And then, there is a “unity on common concerns”, Tendero continued, such as “poverty alleviation, Human Rights issues, terrorism, nuclear weapons, sustainable development, integrity in political electoral processes, etc.”

The Secretary General closed by saying that “Missional witness (preaching the Gospel) and the Salt and Light Witness (Preserves and transforms society)” need to go hand in hand.

ROUND TABLE: HOW IS SITUATION IN THE 21st CENTURY?

The AEI annual meeting closed with a final round table (read about the other sessions), in which Bishop Tendero and Jaume Llenas (Spanish Evangelical Alliance, AEE) joined AEI’s President Giacomo Ciccone to discuss their points of view on the topic “Evangelicals and Roman Catholicism in the 21st century.”

Giuseppe Rizza had introduced the discussion pointing out two trends: “The fact that the centre of Christianity has shifted from the North to the South” is one. The other: “While secularism says religion is part of the past, it is obvious that we are living in a very religious century.”

LLENAS: “NO COMMON SOURCES OF AUTHORITY” WITH CATHOLICISM

“When we relate to Roman Catholicism we need to think: Why? And, for what?”, AEE Secretary General Jaume Llenas said. “For Catholics, the Church equates to the institution, and therefore, they would say we evangelicals are not Church.” Meanwhile, “we believe there is some Church inside Roman Catholicism, but we do not see the Church as a human institution. This is the first problem we have.”

The second common obstacle, Llenas continued, is that “there are no common sources of authority. This means that when we have dialogue with them, it leads to nowhere most of the time. We mainly are losing time. The ecumenical chat is frustrating”. Dialogue needs to be seen from a new perspective: “We have to go to a new concept: the dialogue with society. We have to talk to the whole society. We need to penetrate society, and there, in the society, we also will find Catholics.”

Read the rest of the article by Evangelical Focus here.