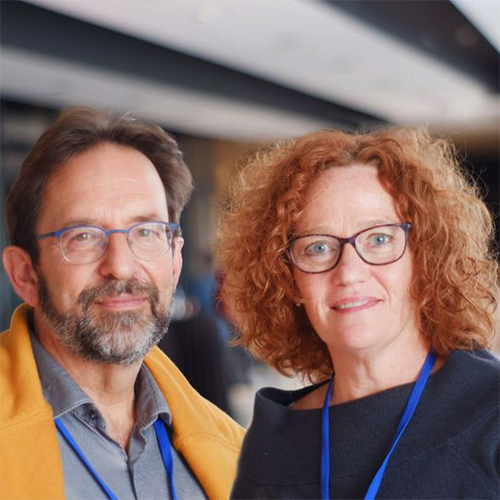 Jan Wessels (1960) is married to Beppie (1962) and they have three sons and a daughter, two Afghan refugee foster-sons and 4 grandchildren. They both studied theology and hold a Master of Theology: Jan in New Testament (Potchefstroom, 2014) and Beppie in Missiology (Apeldoorn, 2021).

They have been involved in ministry since 1987. Jan is ordained as pastor in the Christian Reformed Churches in the Netherlands.

From 1992 until 2010 they served as missionaries in western Botswana among the Naro San people in the Ghanzi District.

In 2010 Jan joined the Evangelical Alliance in the Netherlands and Beppie became pastoral worker in their home church, a large evangelical congregation in Veenendaal, the ‘buckle of the Bible Belt’.

Since 2018 Jan leads Faith2Share (Oxford) as International Director, a global network of disciple-making mission movements. He is a member of the Executive Committee of the WEA Mission Commission, the board of OM Netherlands and the board of a special chair about Church in the context of Islam at the Free University in Amsterdam.

Beppie was recently ordained as City Pastor of the Havenkerk, a missional community in a multicultural and socially deprived area of the Hague. They therefore just moved from Veenendaal to the Hague.
Beppie is chairing the board of Intercultural Church Plants Network Netherlands and a board member of Interserve Netherlands.

Connie Main Duarte works in Global Ministries for BGC Canada and she lives in Portugal, from where she develops all sides of her ministry.

Connie is the General Secretary of the European Evangelical Alliance, a pastor at the Meeting Point, a Baptist church in Estoril, Portugal, a Board member of the World Evangelical Alliance and the Chair of Crescer com Amigos, an association that works with vulnerable children in the Portuguese school system who need care and extra attention to be successful in school. She is involved in staff training for the GBU Portugal. She speaks at conferences around Europe.

Connie studied both in the areas of missions and communication while living in Canada. She moved to Portugal in 1998 to work with university students. After ten years with GBU Portugal, Connie taught at the Baptist Theological Seminary before taking her current positions.

Connie loves teaching and preaching and longs to see more young people and women using their gifts both in missions and the local church. She has a passion for integrated mission and community living.

While Connie loves working with church, missions, preaching, and teaching, she is equally passionate about her family: her husband João, and their two sons, Joshua and Caleb.