An hour out of Maputo, the capital of Mozambique, we pulled off the highway onto a trail which looked impassable. The local pastor, riding his All Terrain Vehicle (ATV), guided us through a maze of huts, open fields and bleating goats into a courtyard. We climbed out of the truck and came face to face with as broad and infectious a smile as one could meet, the pastor welcoming us with loving warmth into his place of calling.

With a mixture of Portuguese, English and local dialect, he led us through a building where women were working the treadles of sewing machines, making clothes and other useful items for sale. They had 21 village children who had been orphaned by AIDS, and the church was looking for ways to help both orphans and widows.

The resourceful pastor had five acres. Because the villagers didn’t have sufficient funds to pay his salary, he not only carried his own by farming but had developed it into a village industry. He proudly showed me his granary of drying corn. But there was a problem. “What was that?” I asked.

We walked to another small building and there was the problem: a broken pump and generator. This past year they only had one crop, in a country in which two can easily be harvested. Without the machinery operating, during the dry season they couldn’t pump the water needed for irrigation. 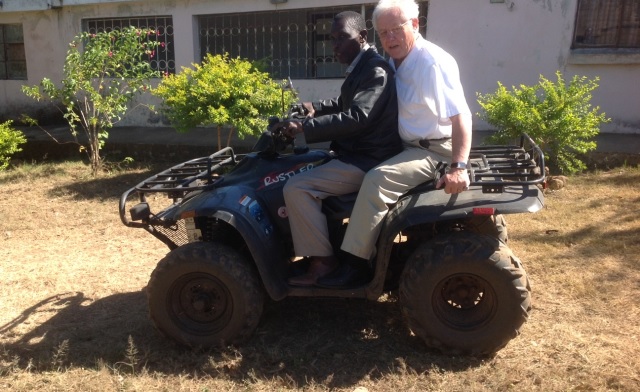 Brian Stiller (right) riding with a local pastor's on an All Terrain Vehicle (ATV) in Mozambique.

Outside I climbed on his ATV and said I wanted to see his land. A farm boy at heart, talking about land and seeing it are two different things. So off we drove, bumping across hills, slashing through bush, bouncing across a bridge which seemed precarious.

Then he stopped, got off, and motioned for me to follow.  We walked through a stand of Mango, Banana and Papaya trees and fields of sweet potatoes and maze (corn). Here, a few hundred meters from the river was the potential of two crops.

“Pastor,” I asked, trying to make myself understood, “why don’t you get it fixed?” In broken English I learned they simply didn’t have the $800 to order the parts from South Africa.

I knew what I was to do.  I held up two fingers, asking if they could raise $200. He nodded his head. “When you raise yours, I’ll find the $600.” We shook hands, and back with our translators, I made sure we clearly understood each other.

A few villagers gathered in the church and we sang, and then he asked me to bring a short message. After we had prayed, we sat outside, talking about what mattered to him.

His larger vision surprised me. Located in this rural area, farming and shepherding his flock, he also cared about his country and the witness of Christ to his people. In 1992 he had helped birth the Evangelical Alliance, serving as its treasurer. But in 2003 it died. I needed some history to understand his concerns.

Mozambique, a country of 22 million, was colonized by the Portuguese, thrown out in 1976 during a rebellion. As in many post-colonial countries, civil war broke out. It ended in 1992, in part brokered by friends at Sant ‘Egidio, a Christian community located in Rome whose combined focus on prayer and Bible study includes working for peace.

Of the 22 million citizens, 12 percent are Evangelicals. Today congregations and missions are scattered about from slums to upscale communities, in villages and the countryside.  Thousands of churches and local ministries have spring up quite spontaneously. Converted people have passion for their neighbors and out of their hearts begin a church plant or, as we saw in the slums of Maputo, nursery care and centers for the afflicted.

That’s the up side. The down side is a fragmentation of people whose faith in Christ and love for the Scriptures has no common center. No sense that they are joined with tens of thousands of other like-minded people of faith. In such fragmentation, there is little opportunity for the potential of encouragement, the synergy of resources, and the raising of a common identity.

The World Evangelical Alliance, the second largest of world Christian communities (Roman Catholics 1.2 billion; WEA 600 million; World Council of Churches including the Orthodox, 550 million) has 128 countries in which Alliances/Fellowships have opportunity to create a true identity of fellowship, common activity and a resilient voice.

I had wondered why the Mozambique Alliance collapsed in 2003 and found the answer all too familiar. The massive flood which blanketed the country in the late 1990s triggered interest around the world. Relief and development agencies rallied and Christians worldwide gave millions. The Association of Evangelicals in Mozambique became part of the means of applying funds to needy areas. But they never had had so much money to deal with. They hadn’t built their infrastructures to handle the processing and reporting of funds. When the flood dried and accounting was called for, they fell short, and international funders then had no interest in further work with them. Not having built an organization for the long term, it had no choice but to close its doors.

Here is my point for prayer and action. Evangelicals by nature are multiple in their denominations and organizations. They believe God leads individuals and groups to start churches and missions. While this is most often good, what is lost is that the ministries often exist alone. That’s why an Alliance/Fellowship means so much for a joint identity, a common voice, and cooperative fellowships and initiatives.

Mozambique needs prayer and support as Christians build a national alliance. In time this country will flourish. Today this Evangelical community tends to be economically poor. The Alliance needs investment to get it going and to sustain it during its renewal. Disasters will occur again. When they come, a national Alliance, properly staffed and trained, will lead its people in managing resources.

But to make this a reality, the people of Mozambique need help to create this network and to sustain a national fellowship of Evangelicaly minded people.  This will breed unity, cooperation, and mutual witness.

My pastor/farmer will get his irrigation equipment fixed and his people will double their annual field crops. But what he really cherishes is a renewal of that nation-wide fellowship he helped begin so many years ago.