A Trip to the Grey Zones between Ukraine and Russia – by Dr. David Boan

Our team from ICR, WEA, Wheaton College Humanitarian Disaster Institute and REALIS arrived in Slavyansk after a five hour train ride from Kyiv.  Our aim was to learn about the conditions in villages near the “gray zones” so that we would be better prepared to support churches, students, chaplains and faith-based groups serving the people living here.  Gray zones are intermediate areas between two opposing groups (Ukraine and Russia).  Since the conflict between Ukraine and Russia there are now a number of these gray zones in Ukraine.  People are allowed to live here, but are in a state of limbo regarding their future, and often live in the midst of ongoing undeclared fighting.  Our visit focused on Zaytseve, Jovanka, Luganske, and Semenivka in the Donetsk region of Ukraine.

We met our drivers in the morning and loaded the food, supplies, and donated quilts we would distribute to villagers.  Ukraine partners from REALIS prearranged for the necessary permits, qualified drivers and routes for our trip to the grey zone.  (Note the insignia on the cars, below, denoting them as approved vehicles). 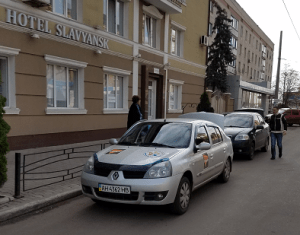 During our two hour drive from Slovyansk to the villages our driver, Oleg, talked with us about how the conflict impacted his life.  He started out driving some supplies to help people living in the villages near the front. This gradually expanded to bringing supplies (food, clothing, etc) to military personnel as well.  As he got to know the villagers and military people they told him how his constant presence was so important to them.  It helped them to know that the community had not forgotten about them.  Now, though he has a full time job and a family, he finds himself driving to the front as often as he can, knowing how important his presence has become.  I was reminded of the ministry of presence, so important in a crisis and sometimes underestimated, and how people who are in the midst of conflict or displaced fear being forgotten.

At the first village we saw people trying to live a normal life under very difficult circumstances.  The village population has dropped from around 900 to 200, with mostly elderly, handicapped, some families and children left behind.  They live with daily shelling and sniper fire that starts up late afternoon each day (Our drivers kept urging us to move along so we would be on our way out before dusk).  As a result of this shelling people spend their nights in shelters in the basement of their buildings, like the one below.  As many as ten people pack into this space to spend each night, then come up each day to try and live life as normally as they can. 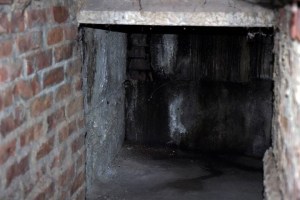 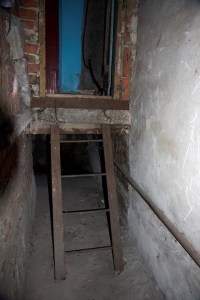 Organizations, such as UNHCR, and many churches and other volunteers bring supplies and provide emotional support to villages.  One example of this support is the ministry of Gennadiy Prosyanko and his wife Elena.  Pastor Gennadiy and Elena bring food, especially loaves of bread, for villagers and provide spiritual support to military personnel (photo).  He brings a simple message of “We want you to know that God loves you and we love you. We remember you and we are very sorry for the grief that has befallen you.”  For the soldiers they bring supplies and do their best to meet special requests for things like water, bug repellent, and blankets.  They also minister to children and try to comfort them in their fear they may be killed by the shelling.  Pastor Gennadiy says “they want to live in a country where they will not be afraid that their lives and the lives of their loved ones may suddenly [end] because they do not have time to run to their shelters during the next firing. ” 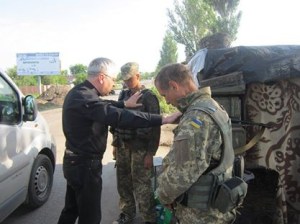 Pastor Gennadiy notes that many churches and other organizations bring relief into the area and support the military, but with little coordination.  he calls on denominational leaders to put aside theological differences and work together.  Seeing this, WEA and Micah Global have initiated conversations on bringing faith leaders together in the Ukraine to discuss coordination, leadership, and how to manage international support.  (See https://www.facebook.com/gennadiy.prosyanko for more on Pastor Gennadiy’s ministry). 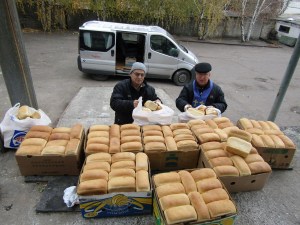 We went on to two other villages, making our way past military check points, our driver driving fast to minimize the risk of becoming a target, swerving around potholes where tanks and other military vehicles have torn up the road.  We arrived at an orphanage where we were able to share quilts provided by friends, and other supplies.  We could hear explosions from incoming shells not too distant from the orphanage, but the children and adults there took it all in stride.  For us, it was another example of how people adapt to the most difficult of situations. 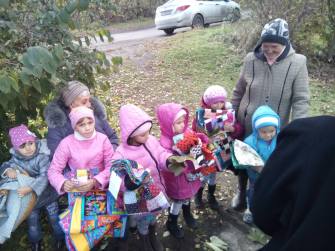 We made a final stop at the remains of the state hospital outside Slovyansk.  The hospital grounds were the focus of fighting between the Ukraine army, separatists and Russian military.  The fighting resulted in the destruction of this large hospital facility, leaving behind the empty hulks of once thriving medical facilities. 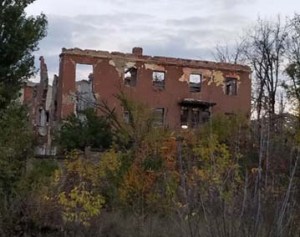 The remains of a hospital building outside Slavyansk

So what did we learn from all of this?  First of all, that the conflict in Ukraine rages on even though we hear less and less about it in the Western media. People are living with shelling and sniper fire and there are regular casualties.  By some estimates there are 1.4 million internally displaced people who cannot return home because it is too dangerous.  Second, the local faith community is responding and needs help.  In addition to material help, there is a great need for assistance with coordination and planning as well as a need for practical training in emotional and spiritual care.  Third, this is likely a long term conflict, which means it will be a challenge to get the world to pay attention.  The conflict appears just as likely to escalate as to settle down, and the growing sense is that it is going to drag on for a long time.