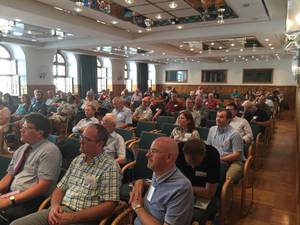 (Bonn, 04.10.2016) “Many Biblical topics and questions have two sides which are equally important – at this point I like to use the term ‘complementarity.’ Many historical or present day theological debates have arisen or arise solely because the parties to the debate emphasize one of the sides revealed in the Bible and neglect another, while the other party does the opposite.” This was the position presented by the Chairman of the Theological Commission of the European Evangelical Alliance and of the Theological Commission of the World Evangelical Alliance, Dr. Thomas Schirrmacher, in a plenary address in the Leucorea of the University of Halle-Wittenberg. The Leucorea is a research institute located in the original University of Halle-Wittenberg University building.

Over the course of five days in the ‘Lutherstadt’ of Wittenberg, 82 Evangelical theologians from all over Europe debated questions of the Reformation under the heading “The Reformation – its Theology and its Legacy.” In the coming year we have the 500th anniversary of Martin Luther’s (1483–1546) nailing his theses to the Castle Church door. This counts as the beginning of the Reformation. The organizer of the event attended by Schirrmacher was the European theological association FEET (Fellowship of European Evangelical Theologians). The FEET General Secretary is the Baptist Pastor Klaus Bensel (Siegen, Germany). The FEET Chairman is the Frenchman Prof. Pierre Berthoud (Aix-en-Provence, France). The conference was supported by the European Evangelical Alliance and its theological commission along with the European branch of the World Reformed Fellowship. 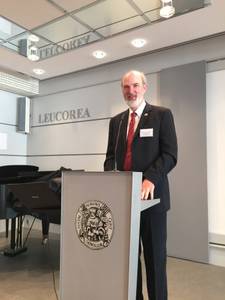 As an example of Biblical complementarity, Schirrmacher quoted the Oxford Professor Allister McGrath on St. Augustine: “According to Augustine, if there is to be an experience of the richness and the complexity of Biblical statements on this topic of justice, one must simultaneously hold fast to absolute sovereignty and true human freedom and responsibility. Simplifying the issue by either disputing the sovereignty of God or human freedom runs into a serious challenge to the Christian understanding of the manner by which God justifies an individual.” [Alister E. McGrath. Der Weg der christlichen Theologie (Christian Theology: An Introduction). C. H. Beck: München, 1997, p. 436].

As an additional example, Schirrmacher gave the following: “The gifts of the Spirit are a good example of the missio dei and the complementarity of mission which God himself conducts and into which he completely integrates individuals. God himself determines through gifts who has which abilities and tasks in the church and in mission. And yet, the individual Christian and the church as a whole are not incapacitated. Rather, the Spirit enables Christians to infuse their distinct characteristics and individuality all the more.”

In addition to the plenary address, Schirrmacher led a workshop on the relationship between the Reformers and Islam and what we can or cannot learn from them for today‘s environment.