Christine Schirrmacher, Ph.D., well known German professor of Islamic Studies and director of the International Institute of Islamic Studies of the World Evangelical Alliance (WEA), spoke at a panel discussion “Respecting Religious Freedom: Legally Safeguarding a Threatened Right” at the headquarters of the United Nations Human Rights Council, a side event related to the 22nd session of the Human Rights Council in Geneva, Switzerland. Schirrmacher concentrated on “Apostasy and Blasphemy Laws: How do they Hamper Human Rights?”

Although only very few countries in the world currently have written laws which forbid apostasy from Islam (or another religion) and threaten apostasy with punishment, the reality is often different from the written law. Especially converts, but also adherents of non-recognized religious minorities, suffer from serious discriminations, violations of their rights, harassment, and partly persecution and mistreatment. Some are even killed because they have changed their religion or no longer remain adherents of the locally propagated version of Islam.

People who defend the unwritten law of apostasy do so because they refer to classical Sharia Law, which on the basis of the Koran and the official tradition has been formulated by influential Muslim theologians until the 10th century A. D. The Sharia unmistakably demands the death penalty for apostates. Wherever converts and apostates or people of non-recognized religious minorities are being killed, this does not happen after an official law suit and because of a judicial conviction. Individuals take the right into their own hands and attack apostates in the streets.

In other cases the families might feel overwhelmed by the “shame” of having a convert in the family and just throw him or her out of their house or persecute him. In sharp contrast to such practices, Schirrmacher emphasized, “The right to change one’s religion or to practice no religion at all is an inalienable human right.“ 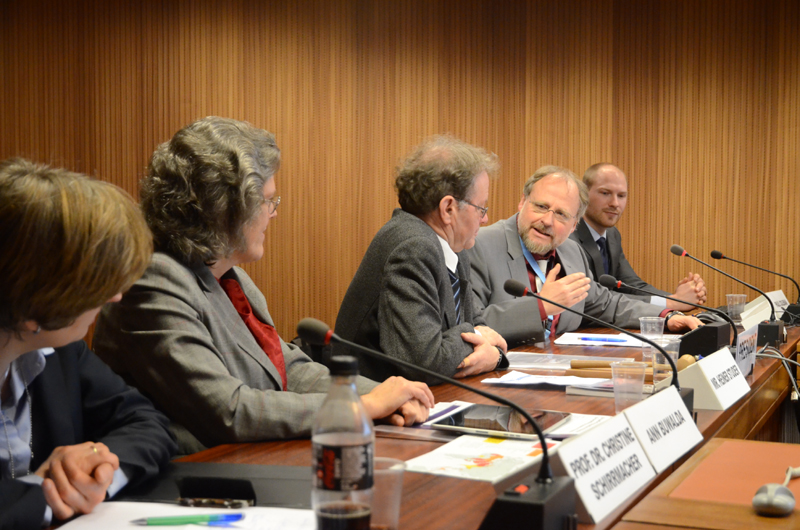 On the podium were also the legal counsel Paul Coleman from Vienna, the advocate Tehmina Arora from India and the professor of law Ann Buwalda from Canada, who mentioned several practical examples of humiliations of human rights related to apostasy and blasphemy cases worldwide.

Heiner Bielefeldt, the UN-Special Rapporteur on the Freedom of Religion or Belief warned that in the secular societies of Europe there is presently a tendency to view religiously oriented people as potentially backwardly orientated or being fundamentalists.