“The European Evangelical Alliance (EEA) defends freedom of religion or belief and freedom of expression for people of all faiths and none. These human rights are vital pillars of democracy”, says a letter sent to the government of Finland this week.

The body representing 23 million evangelical Christians across Europe expressed its “dismay” over the treatment of member of parliament and former Interior Minister Päivi Räsänen, “who faces prosecution and up to 2 years in prison for 3 separate cases for expressing biblical views”.

Since 2019, the member politician and committed Christian, has been questioned by the police several times for an investigation of the General Prosecutor, who filed charges against Räsänen for hate speech against homosexuales on 29 April 2021.

In the letter, the EEA points out: “In the case of a brochure published in 2004, the police added that, if it was decided that biblical views were considered per se to count as agitation, then it would have to become a crime to make the Bible available. Clearly, such a situation would be ludicrous”.

“Foundational issues of freedom of religion or belief and freedom of expression are both at stake”, says the EEA, a reality that clashes with the Article 10 of the European Convention on Human Rights and Article 19 of the International Covenant on Civil and Political Rights. According to this legislation, “people have the right to express their views in public”.

The EEA, which has a Brussels representative for the European Union, underlines that “the United Nation’s Rabat Plan of Action has set certain criteria for defining hate speech. In all three situations for which she stands trial, Päivi Räsänen’s actions do not cross the Rabat threshold for hate speech”.

After analysing the words of Räsänen, the EEA concludes that “there is no hint of intent, likelihood or imminence of acts of hatred happening”. And asks: “Is the Public Prosecutor attempting to redefine human rights law? The right to freedom of expression exists to legally protect those that express views which may offend, shock or disturb others”.

The letter ends by stating: “The EEA calls upon the Finnish court system to uphold freedom of expression and freedom of religion or belief. We urge the Finnish government to make clear its unequivocal support for these fundamental freedoms and the Rabat Plan of Action’s threshold for hate speech”. 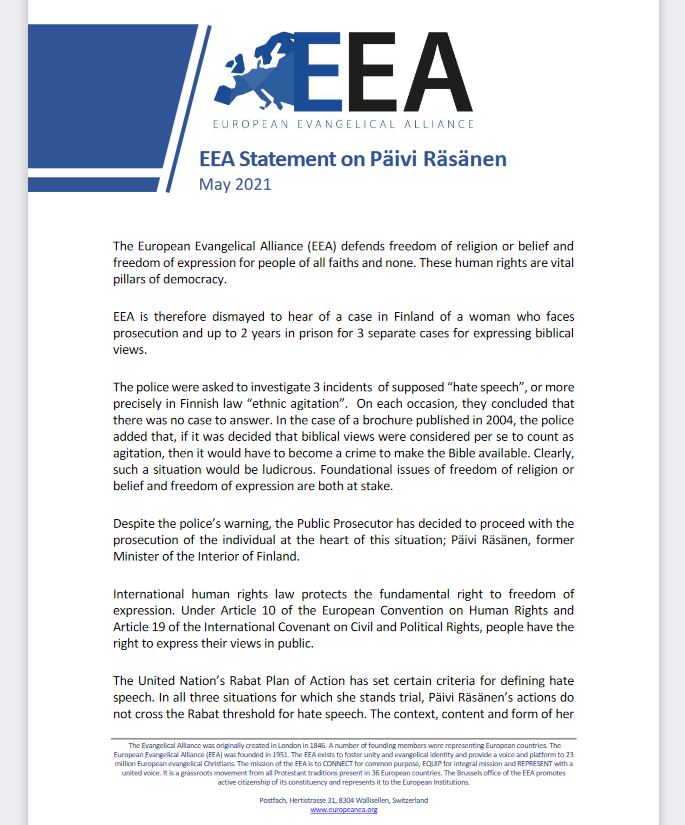 The court process opened against Päivi Räsänen has caused a social debate about fundamental rights and the place of the Bible in the public square not only in Finland, but elsewhere as well.

The Spanish Evangelical Alliance (AEE) sent a letter to the Finnish ambassador in Madrid asking for information about the case and expressing its “full support” to Päivi Räsänen.

“Mrs Räsänen will be brought to court for her religious ideas, more specifically, for reproducing the message of the Bible”, the AEE says. The General Prosecutor “is ignoring a basic distinction”, the authors say, because “one thing is the free contrast of ideas and another thing is disqualifying other persons”. The “Western democratic systems we have built clearly distinguish the two and guarantees both freedom of expression and the dignity of all people”. 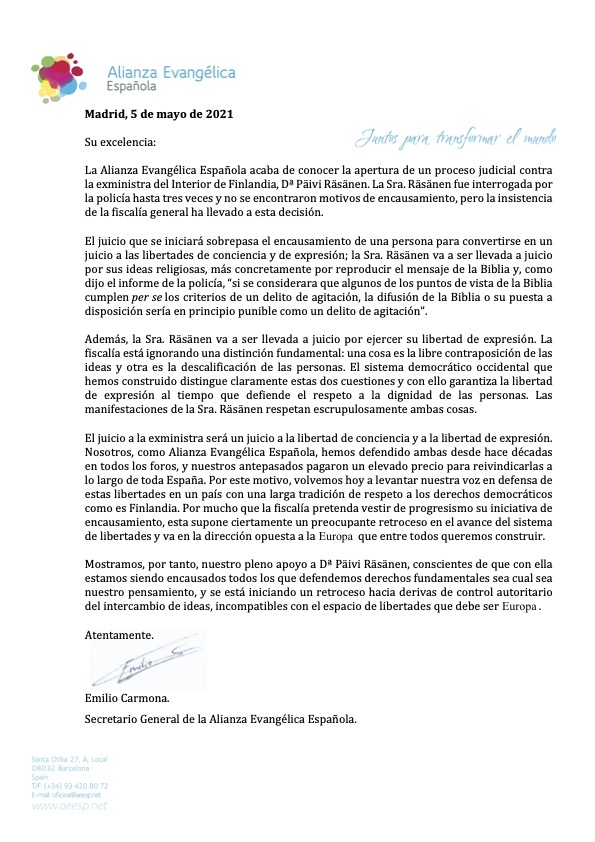 The Spanish evangelical body looks back at its own history, underlining that “many before us paid a high price to defend such freedoms all across Spain. For this reason, we again raise our voice in defence of these freedom in a country with a large tradition of respect of democratic rights like Finland”.

The opening of a court process against Päivi Räsänen “may be dressed up as progress”, says the letter, but it “certainly is a worrying step back in the advance of the liberties system, and goes in the opposite direction of the Europe we all want to build together”.

The Spanish Evangelical Alliance hopes the case is not a sign of “the beginning of a setback that drifts towards an authoritarian control of the exchange of ideas, a reality that would be incompatible with the space of freedoms that Europe should be”.

The letter closes by stating that “all those who defend the fundamental rights (no matter our thinking) are being tried together with Päivi Räsänen”.