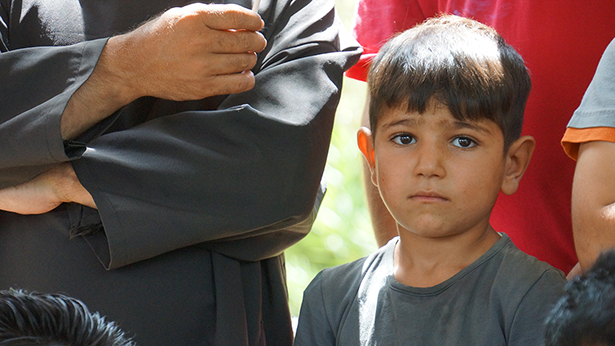 IAFR President (Tom Albinson) visited a camp in southeast Turkey that hosts 4,000 refugees from Iraq. The people are all from the Yazidi minority ethnic group. They fled to Turkey in August 2014 to escape attacks by Islamic State (IS) militants. They shared horrific stories of torture and murder. Many of their wives and daughters were carried away by IS as slaves.

A small local church in Diyarbakir, Turkey, has been faithfully serving the refugees by hosting and coordinating medical teams, distributing food, providing refrigerators and more. The local pastor told Albinson that this kind of work is new to them and they don't really know what they are doing. He asked for training and help as the needs are great and the work is weighing heavily upon church leaders.

As Albinson also serves as Ambassador for Refugees with World Evangelical Alliance (WEA), he put together a team that included a key Christian leader from Bulgaria, and another from Sri Lanka (Executive Director of WEA's Religious Liberty Commission). Together they visited with the refugees and the camp administration to get a first hand understanding of the challenges they face. They then met with local church leaders to explore how the church-at-large might come alongside of them to help with long-term response.

Albinson says, " In my 35 years of serving refugees, I cannot remember meeting with a more traumatized group of refugees. Their plight is complicated by regional politics. While other refugees from Iraq and Syria receive formal refugee status in Turkey, the Yazidi people presently have no such status from either the United Nations (UN) or the Turkish government. They do not see returning home as an option. They do not have the option of staying long term in Turkey. They do not have access to the UN refugee resettlement program. Many told us that they feel their only option is to risk the dangerous journey to the European Union (EU) and try to get asylum there."

Albinson plans to return within the next 6 months to offer some basic refugee ministry training to the local church. In the meantime, IAFR and our friends at WEA are trying to figure out ways to advocate on behalf of these dear people so that they can find a place to settle and begin rebuilding their lives.