Integral Alliance: Working Together in the Democratic Republic of Congo 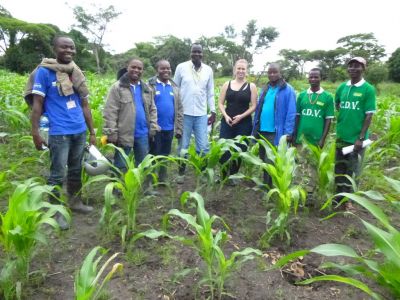 Integral Members Tearfund UK and Tearfund Belgium are over half way through an eighteen-month-long joint project in the Democratic Republic of Congo (DRC). The project is funded by the Belgian Government, and will run until September 2014.

"The aim of the project is to promote sustainable approaches to food security in order to reduce people’s vulnerability to hunger in remote conflict-affected communities in South-Kivu,” says Dorien Strobbe, Project Manager at Tearfund Belgium.  “At the end of the project our hope is that local people will have increased both the amount and the diversity of their farming - livestock, fish and arable agriculture are all being rehabilitated. The communities are also learning how to be more prepared for future disasters and their response to them in order to lessen their long-term impact.”

Dorien says, “We have been implementing this project for one year now and everything is going well. As this was our first Tearfund Belgium and Tearfund UK joint venture that received a Belgium Government grant, we decided to do a two day briefing for Tearfund UK staff at our offices before the project started.” In December 2013, Dorien went to DRC to visit the project and meet with local staff.  She says, “I saw for myself the positive effects of the project and was able to answer all the questions the team had during the first phase of managing the work. Also, this has been really helpful collaboration, with both our organisations learning a lot: Tearfund UK on how to manage a Belgian Government Grant and Tearfund Belgium about that the Belgian logic/regulations are not always logical to everyone! The experience has been both interesting and educational.”

Integral Alliance is a WEA affiliate and has served as a global partner to the WEA in the field of relief and development since 2006. Integral contributes to the WEA’s goal of fostering Christian unity around the world through working with its Members on a more integrated and collaborative strategy in disasters.