Join the International Day of Prayer for Kosovo on January 31

This is the 15th year where on January 31 you have joined in prayed; have fasted and have given from your resources for Kosovo. During these years because of your prayers, the Lord God has intervened in Kosovo and our country is no longer as it once was. Year after year I had prayer requests from Kosovo have been different and God has answered your prayers. Part worth mentioning is the fact as encouraging the growth of Evangelical church in Kosovo as well as in number at maturity. 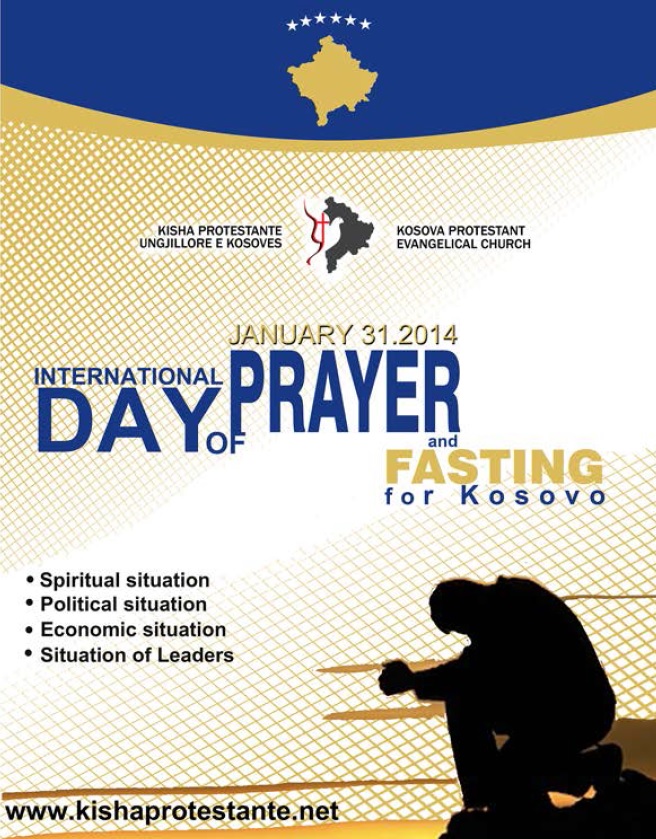 Prayer Requests for this year:

Four are strategic directions for prayer this year. Please seek God’s face to guide you in other prayer points.

(Pray for evangelism without the affected countries, the current church growth, sustainability of believers, strengthening KPEC)

Kosovo has a population of over 90% Muslim and 10% Christian. Muslims are divided into different Islamic sects. Islam is the dominant religious force in the country with about 700 mosques across the country (half of them are built during the last decade). It is worth mentioning the fact that in towns of Prizren, Gjakova, Rahovec and Deçan, Sheh and Dervish – a certain sect of spiritist Islam is present with their tekkes as places of worship.

In the last 2-3 years, fundamentalist Islamic sects, mainly influenced mainly by Saudi Islam, have radicalized their positions. They require Kosovo to become an Islamic state with shariah law governance. Christians, on the other hand are divided into Catholic and Protestant among the Albanian population and among Orthodox Serb population.

Evangelical Church, though slowly growing, is less than 1% of the population. Evangelical believers have the opportunity to gather in all the seven Kosovo’s main cities: Prishtina, Mitrovica, Peja, Gjakova, Prizren, Gjilan, Ferizaj, as well as some smaller towns like Vushtrri,Malishevë, Podujev, Suharek, Deçan, Kaçanik, Kamenicë, Milloshevë.

(Pray for the peace of Kosovo)

In 2008 Kosovo declared independence and is currently considered as the newest country in Europe. Serbia continues to reject Kosovo's independence. After about a decade of objections, in 2013 the prime ministers of Kosovo and Serbia (as a result of pressure from the EU) have reached an agreement that Serbia considers as Serbia’s return to Kosovo. Municipalities inhabited by Serbian population in Kosovo, continue to oppose any form of statehood of Kosovo. The situation is particularly fragile in northern Kosovo municipalities of Mitrovica, Zveçan, Leposavic and Zubinpotok.

These Municipalities are governed by lawlessness. Due to the ever greater impact of politico – religious Islamic extremist circles, in 2013 about 100 citizens of Kosova have voluntary joint the war in Syria. Such Political-religious movements are a serious threat to Kosova the Kosovo Government has announced. In 2013 Kosovo police announced they had arrested an Islamic militant group who were planning terrorist attacks in Kosova. They also are accused of having beaten badly Mormon missionaries in Prishtina. Due to the fragile state, in Kosova can be accommodated dangerous organizations and individuals.

(Pray that God will provide food for the population of Kosova; that Kosova's youth do not need to migrate to other countries for a better life; that the Lord will root out corruption)

Kosova's economy is almost nonexistent. With its production, Kosova fails to provide either a living. Overall unemployment reaches 40 % quota where as among the youth as high as 70%. 37% of Kosovars are considered poor while about 12% of them live in extreme poverty on less than one euro a day. In 2013 over 25% of Kosovar families have their existence dependent on remittances from Diaspora (mainly immigrant in Germany, Switzerland and Austria as well as the UK, USA and Canada) in which about 70% are spent on food. As a result of the difficult economic situation and lack of perspective, youth are largely migrating to the West. Since the Kosovars are not able to stay and work in these countries, migration is done illegally, risking their lives and paying large amounts of cash to mafia networks.

On the other hand Kosova presents a paradox because Kosova parliament has more millionaires MP’s then many other countries in the region. Corruption is very much present all over the place. Kosova continues to stay high on the ranking lists of most corrupt countries in the world.

(Pray for political and religious leaders; for pastors and missionaries)

In November 2013 Kosova has concluded its fifth municipal elections. The international observers have regarded as fair election. About 30 municipalities have elected their mayors. Under the Constitution, Kosovo is a parliamentary state with the President of the Government. Kosovo president is Mrs. Atifete Jahjaga and Prime Minister is Mr. Hashim Thaçi. In 2013 almost all churches and church plants in Kosovo have its own pastor. KPEC is directed by Council KPEC of seven members coming from member churches and is lead by the President. During the last 3-4 years there’s a growing influx of missionaries leaving Kosova. Kosova needs more labours on the ground to preach the word.

For more information or donations, please contact us in contacts details provided below