Modern Slavery – The Hidden Crime in the Middle of Society

The Evangelical Alliance of Darmstadt, Germany, shows how to break the taboos that dehumanize

About 1,300 worshippers from Protestant churches in Darmstadt, a city in Germany, participated in two public events that brought to light the two-sided problem that sometimes seems to be banished by a taboo to keep it from consideration in society: Slavery and Prostitution.

Prof. Dr. Thomas Schirrmacher, Ambassador for Human Rights of the World Evangelical Alliance, used disturbing facts to show the existence of an extensive parallel criminal universe in the middle of western society in which thousands of young women, and sometimes young men, are forced to work against their will in the conditions of slavery. Often they have to be ready to do whatever the “customer” wants, as many as 40 to 60 times per day. Many were lured from their homelands by means of false promises, driven into a situation of false financial debts, threatened, and exploited.

Europe is the center for this dehumanizing industry, and Germany is one of the main hubs. The result is a corporate structure that produces astonishing sums of money for the mafia in which the abused women receive almost nothing. It seems that society and even politicians often look the other way while normal people are desensitized. 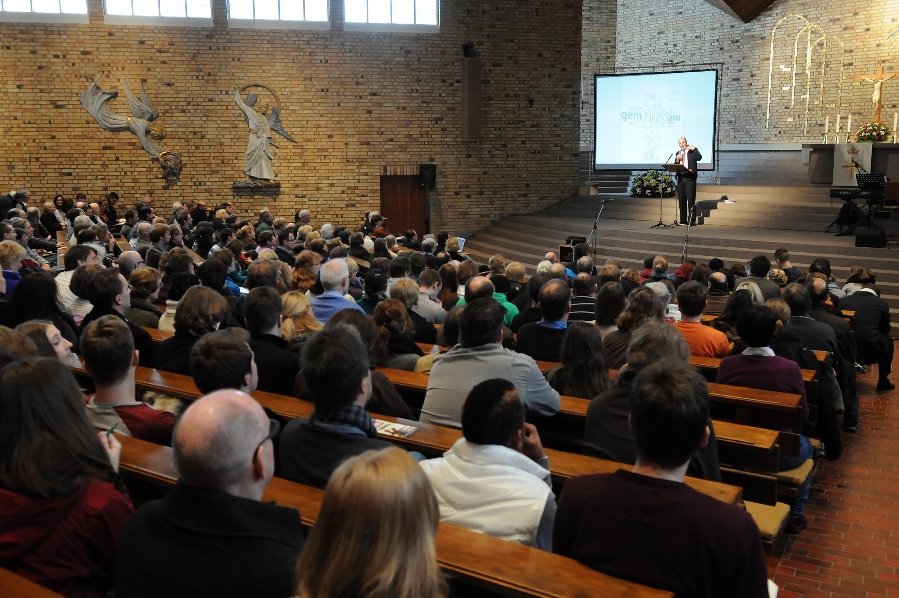 Dr. Schirrmacher pointed out that one of the most authentic traditions of evangelical Christians, in place for centuries, has been to raise a voice and to get involved on behalf of abused people, so that they are helped. In the eighteenth century, Christians who were inspired by the Bible took up the long and difficult process of bringing the suffering of slaves to public attention, so that slavery was eventually outlawed. At that time no one even suspected that this evil phenomenon would return in a “modern form” that would expand so extensively to engulf as many as 27 million people today.

Pastor Gaby Wendland brought a report in the worship service about how their “Mission Freedom” has been able to free some women from the claws of the mafia in Hamburg and help them transition to a new life. The fact that some such traumatized people have been helped to find a new and emotionally stable way of life, often by turning to the Christian faith, encouraged worshippers to get further involved. The “City Church” of Darmstadt began a special ministry to the “Prisoners of the Sex Industry” about eight years ago. The Evangelical Alliance, which is a joint organization of Christians from different churches, composed a letter to the members of parliament in Darmstadt; it was signed by hundreds of people at the worship service. The unified prayer in the worship services served as a “Starters Pistol” for the efforts that should arise from the events.

Demonstration against human trafficking and slavery

In the afternoon in the central place of Darmstadt, the Luisenplatz, the passersby were amazed when there was suddenly a maze of about 250 “frozen slaves.” The Evangelical Alliance Darmstadt had called for this unusual action. The goal of this flash mob was to call attention to the problem of human trafficking and slavery in the twenty-first century. In one of the speeches at the event, Pastor Marcel Redling pointed out, “We live in an age of slavery. Today there are about 27 million slaves, more than ever before in history."

Young and old came together to the flash mob. Each of the participants carried a cardboard sign on which was written, for example, “Dodo, 13 years old, child soldier in the Congo,” or “Lylin, 17 years old, seamstress in the Philippines,” or “Nadia, 19 years old, enslaved prostitute on the streets of Darmstadt.” For 20 minutes they froze themselves into a labyrinth of “frozen slaves.” Astonished pedestrians had to walk through this spontaneous sea of slaves; many stood in silence, while others nodded their heads in agreement.

In the announcement given by the initiators of the unusual event, they said they want to give names to the unknown slaves. Pastor Samuel Diekmann called out “Viva la Reformation!” (Long live the Reformation!), and he urged people to be courageous against human trafficking and on behalf of freedom and justice. Gaby Wentland, who lives and works in Hamburg, urged the people of Darmstadt and Hesse not to close their eyes to these problems in their cities.

In a concluding “March of Freedom,” the participants held a procession with police protection through the pedestrian mall in Darmstadt while shouting out for a new sensitivity and societal perception for every form of exploitation and enslaving of people. The speeches of Samuel Diekmann and Gaby Wentland can be heard (in German) as podcasts at: jesus-gemeinde-dietzenbach.podspot.de/

Photos by courtesy of Joachim S. Müller at Flickr.