As we draw near to the end of the summer, we just want to praise God for a fruitful summer. Below are reflections from one of leaders who learned something valuable through running one of the summer camps in Hebron. May you be blessed as you read the following.

Every year we move our Palestinian summer camps to a new village or city in order to give more children the opportunity for a week of fun. This year our eyes were turned towards Hebron, the largest and divided city in the West Bank (other than East Jerusalem) with 160,000 Palestinians and 500 Israeli settlers and known for its violent clashes between the Palestinians and settlers. The Palestinian part of the city is exclusively Muslim and considered one of the most conservative communities in the West Bank.

Hebron was unknown territory for me and for Musalaha. I had not been in Hebron since the outbreak of the first Intifada and this camp would be Musalaha’s first ever event in Hebron. I visited the camp site several times before the camp as part of the preparation but nonetheless I must admit that I was fearful of doing camp in Hebron. It is hard to put words to the fear but it was fear of the unknown, fear of being attacked physically or verbally for being a Christian, fear of being met with hatred and bitterness. And I guess at the end of the day it was a fear of Islam based on ignorance, prejudice and stereotypes that I had built over the years which is not so strange considering the continued growth and thriving of Islamophobia in the West.

It seems that many countries in the West are teaching and encouraging its citizens to dread and hate Islam and to dislike and disrespect Muslims. These feelings are based on actions by a number of Muslims and result in stereotyping, demonization and dehumanization of all Muslims. The stereotypes have very little resemblance to reality. Looking at my home country Denmark, the Mohammed drawings say it all. In this land, a lot of the blame for the Israeli-Palestinian conflict is put on Islam.

This trend is also evident and on the increase among believers. Many times we are told as believers to distance ourselves from Muslims. We are encouraged to see Islam as a threat. I guess the battle road seems shorter and easier than the road of reconciliation. The word hatred is not used because it is so strong but is there really any difference? Added to this is also an element of arrogance. As Christians we consider ourselves superior to Muslims who are often pictured as uneducated, primitive and fanatic and therefore misbehaved and violent. I am sure there are Muslims who hate Christians for various reasons, but I think that there are at least as many Christians who hate Muslims.

I also encounter this attitude at Musalaha events. Meeting with believers from the other side is one thing. Even meeting with non-believers is a possibility. But many are reluctant to meet and interact with Muslims. In recent years Musalaha has initiated bridge building activities with Muslims because we believe that we are called to do so and many Muslims are very eager to be involved.

I in no way have a very deep theological knowledge but as I personally read the scriptures, we are told to love everyone, pursue peace with all men and be a witness to everyone. And we are told to do so not with words but with actions. “Let us not love with words or tongue, but with actions and in truth. This then is how we know that we belong to the truth and how we set our hearts at rest in his presence whenever our hearts condemn us. For God is greater than our heart and he knows everything.” (1 John 3: 18-20) The purpose of this camp for Muslim children was to love with actions. So unless we make a conscious choice to educate ourselves differently, we inevitably grow up to fear Islam.

My fears were greatly put to shame at camp. During the week we looked at five basic elements of friendship: loving, giving, trusting, being loyal and accepting through storytelling and songs. We also painted some of the wall around the school to give the school more color, made turtles and other exciting things in crafts, built volcanoes and had coke squirt out of them, cracked open the piñatas and played many team building and water games. When Shakira’s World Cup song would blast out from the loud speakers everyone, children and leaders together, would break into dancing. We had 82 Muslim children ages 7-11 join our team of 14 local leaders and 14 youth and youth leaders who came to help us from Bolton. It was the easiest camp yet because the children were so well behaved and respectful, the best behaved children we have yet had in any Musalaha event. They were excited and grateful for everything we did and I did not hear any whining the whole week. Every morning when we arrived at 8:30 many of them would already be waiting for us at the school gate (some of them since 7:30, too excited about the day to wait at home) with big smiles on their faces, greeting us: “Good morning Miss. How are you?”

So through this week, all my stereotypes went out the window and I am now replacing them with positive experiences and relations that I have built which will encourage me to increase my interaction with Muslims and others different than me, just as God has commanded me to do. I know that I am stepping on controversial ground and some may say that it is oversimplified but I still find it important that we share experiences that God gives us to help us shape our lives as meant by God.

Youth – We ask that you uplift the youth who have just arrived in Switzerland that the Lord would protect them as they begin this journey and establish relationships with one another. Pray for the leaders and for unity among the Israeli and Palestinian participants and for protection while they are in Switzerland.

Office – We first of all would like to praise God for the new office space we will be renting – in the same building. We ask that you pray for us as we make this transition and that the move would go smoothly.

Young Adults – We just want to praise God for a successful Young Adults Sound and Sand Encounter, in which Palestinian and Israeli young adults met with American young adults in Gig Harbor, Washington to begin the reconciliation journey together. We would like to personally thank Chapel Hill Presbyterian for their hard work and hospitality in hosting our young adults and organizing the majority of the program for the part that took place in the States. Part two of the encounter will take place next spring in Wadi Rum, Jordan.

Camps – We would like to praise God for a wonderful summer where we organized and ran three summer camps in Bethlehem, Hebron and Shaffiya, Israel for approximately 500 children. We were blessed with a large number of local staff along with volunteers from Calvary Community Church, St. Peter’s Parish from Bolton and YWAM.

If the Lord has laid on your heart to contribute to the ministry of Musalaha below is a list of the following addresses. 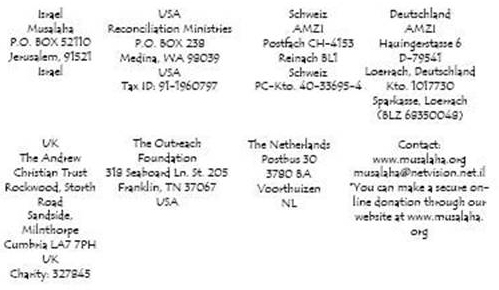