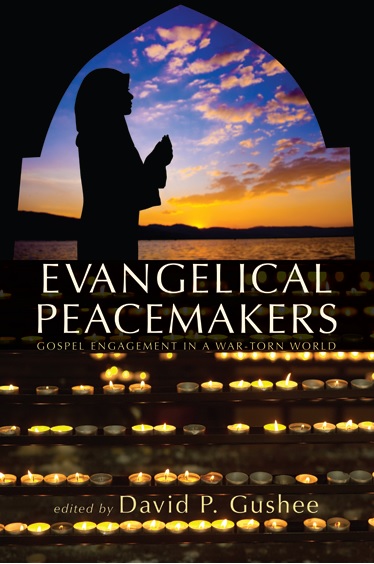 'Evangelical Peacemakers - Gospel Engagement in a War-Torn World' contains fifteen essays originally presented at a conference on evangelical Christianity and global peacemaking held at Georgetown University in September 2012, including that of Dr. Geoff Tunnicliffe, Secretary General of the World Evangelical Alliance. It is followed by a critical analysis of the collection by the editor, David P. Gushee.

The collection as a whole gives considerable attention to Christian- Muslim relations and offers a number of extraordinary accounts of evangelical peacemaking with Muslims and efforts to engage Islam as a living religious tradition.

The concluding essay suggests that while evangelical peace and war thinking cannot escape the paradoxes and challenges that have always bedeviled Christian theorizing about war, contemporary evangelical peacemaking efforts reflect substantial progress in implementing the radical love of Jesus Christ in some of the most challenging contexts and conflicts in our world today.

David P. Gushee is Distinguished University Professor of Christian Ethics and Director of the Center for Theology and Public Life at Mercer University, and the author/editor of fifteen books in Christian ethics. He is widely considered one of the leading moral thinkers in evangelical Christianity.

The book can be ordered here.


“An important contribution to an increasingly vigorous dialogue on the implications for Christians of Jesus’s command to love our enemies. Rigorous theology and powerful personal stories combine to create a substantial addition to evangelical peacemaking.”
—RON SIDER, President Emeritus, Evangelicals for Social Action

“Evangelical Peacemakers educates and equips followers of Jesus about what it means to walk in the footsteps of the Prince of Peace in a war-torn world. With diverse perspectives from leading evangelicals, the book provides critical analysis and discussion that help direct Christian understanding and action in pursuit of global peace and justice. May this resource serve as a rallying cry for evangelicals to be increasingly engaged with peace-building efforts around the world!”
—MAE ELISE CANNON, author, Social Justice Handbook

“I have seen the principles of just peacemaking (outlined in this book) transform communities, and I have become convinced that peacemaking is the cutting edge of Christian discipleship for the twenty-first century. This book offers a thoughtful starting point for anyone willing to follow Jesus on the path of peacemaking.”
—LYNNE HYBELS, Advocate for Global Engagement, Willow Creek Community Church, Barrington, Illinois