The WEA Department of Theological Concerns has released six new books. The first two listed
below are part of the WEA Global Issues Series and the other four add to the World of Theology
series. All six can be downloaded here.

• Christine and Thomas Schirrmacher, The Oppression of Women: Violence—Exploitation—Poverty

• Christine Schirrmacher, Islam and Democracy: Can They Be Reconciled?

• Peter Lawrence, Fellow Travellers: A Comparative Study on the Identity Formation of Jesus Followers from Jewish, Christian and Muslim Backgrounds in the Holy Land

• William Wagner, From Classroom Dummy to University President: Serving God in the Land of Sound of Music

• Thomas K. Johnson, David Parker and Thomas Schirrmacher (eds.), In the Name of the Father, Son, and Holy Spirit: Teaching the Trinity from the Creeds to Modern Discussion 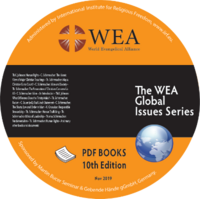