News From the Italian Evangelical Alliance: We Are All “Ns”

Share on facebook
Facebook
Share on twitter
Twitter
Share on pinterest
Pinterest
Share on linkedin
LinkedIn
Open-air prayer rally in Rome for the persecuted Christians in Iraq
Christian and other minorities are threatened by the ISIS troops in Northern Iraq. Their goal is to establish the Shaaria law and an Islamic state. The homes of the Christians are marked with the letter “N” which is the initial letter of the word “Nasrani”, followers of the Nazarene, i.e. Jesus Christ. Once they are marked they can be confiscated by the Islamists and the
Responding to the call to join in prayer for the persecuted Christians by the World Evangelical Alliance, the Italian EA convened a open-air prayer meeting in a central square of Rome. More than 150 evangelical Christians from churches in Rome and central Italy gathered together to pray for the persecuted Christians in Iraq and Syria and for the other religious minorities. They prayed for peace in Iraq and for religious freedom for all.
We are all “Ns” – was the slogan of the meeting. We are all together with those who are suffering. A letter to the Italian Government was sent to express concern for the situation in Iraq and to encourage action in whatever way possible to help the different minorities. Together with Open Doors Italy, the Italian EA organized special prayer events in Milan, Turin, Bologna, Naples and Catania. 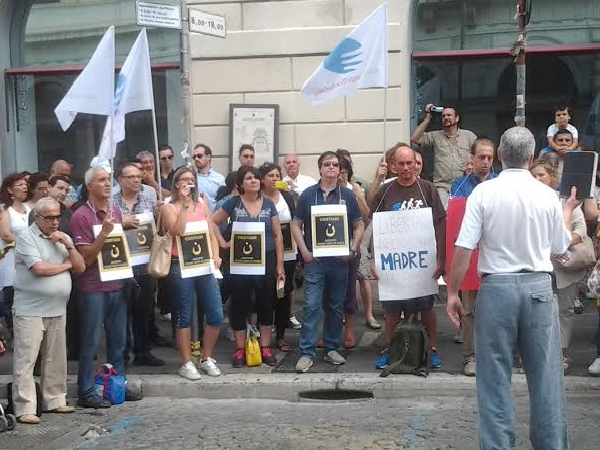