(Bonn, 21.02.2017) “The secular state must equally guarantee freedom of religion for freedom loving Muslims and use its monopoly on the use of force to suppress those Islamists who are enemies of freedom of religion.” This was the main thesis presented by the Director of the International Institute for Religious Freedom on the occasion of the “Castle Burger Discussions” held by Germany’s Mrs Merkel’s political party the Christian Democratic Union (CDU) in Solingen. 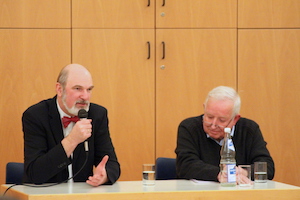 Religious freedom is never achieved half-heartedly, claimed Professor Schirrmacher, who teaches sociology of religion at the University of the West in Romania. One simply must protect Muslims from whoever would threaten their freedom of religion—as well, of course as protecting oriental Christians and converts from Islam to Christianity—especially from those Muslims who are called Islamists, whose goal is the abolition of religious freedom or who would justify or even use violence.

Freedom of religion, as is true with all human rights, must not only be made legally possible; fundamental rights must be actively defended by means of the monopoly of force of the state against all those who justify, propagate, or practice abuses of those rights.

The theme of the evening was “Christian Persecution in the Middle East as a Reflection of the Situation of Religious Freedom Worldwide.” Schirrmacher, who is also chair of the advisory committee for the Central Council of Oriental Christians in Germany (Zentralrat Orientalischer Christen in Deutschland, ZOCD), reminded the audience of the genocide of Christians that is going up and down since 1915. Whoever sees the current situation in Syria and Iraq as a new or short term problem is historically forgetful. For oriental Christians the Middle East has never truly become a place of peace since the mass murder of millions of their fellow believers a century ago. Today’s genocide is only a new appearance of a terrible tragedy and evil tradition, with a series of starts and stops, which has been going on for at least a century.