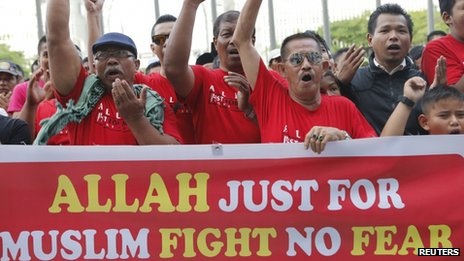 Last week the Court of Appeal in Malaysia ruled that non-Muslims could not use the word "Allah" to refer to God, overruling a High Court decision in 2009.

In 2008, the Malaysian government threatened to withdraw the publishing license of The Herald, the newspaper of the Roman Catholic Church, over the use of the word "Allah" to refer to the Christian God. This set off a lengthy legal battle that resulted in the country's High Court eventually ruling in favour of the The Herald in 2009. The government, however, appealed the verdict.

The Court of Appeal in its ruling on 14 October 2013 stated that the use of “Allah” by non-Muslims could lead to public disorder. Chief Judge Mohamed Apandi Ali, who headed the 3-member appeals court panel, said that the usage of the word "Allah"  was "not an integral part of the faith and practice of Christianity." He added that, "such usage, if allowed, would inevitably cause confusion within the community.” In the verdict, the panel also expressed the opinion that all religions should be practiced in peace and harmony with Islam as it was the official religion of the Federation.

The Rev. Lawrence Andrew, editor of the The Herald stated the publication plans to appeal the ruling in the country’s Federal Court.

In a pastoral letter on the issue, Eugene Yapp, Secretary-General of the National Evangelical Christian Fellowship of Malaysia, called on the country’s Christians to contribute to an atmosphere of mutual respect and acceptance by building bridges with other religious groups. He also called on Christians to unite for a season of prayer and fasting to intercede for the nation.