Schirrmacher: Martyrdom has to become a Part of Doctrine

At the International Meeting for Peace organized by the Catholic community Sant’Egidio, one of the largest interreligious 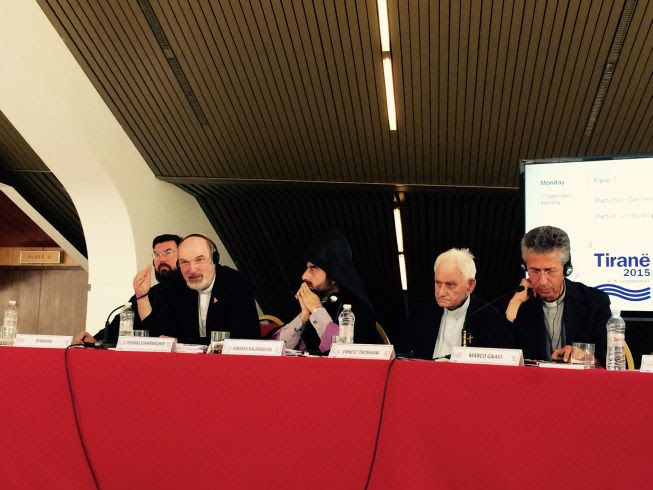 meetings for dialogue in the world with leaders of all world religions, the World Evangelical Alliance’s moderator for intrafaith and interfaith relations and human rights and freedom of religion expert, Thomas Schirrmacher, has called upon the international Christian community to awaken from its lethargy and demonstrate a heretofore unequalled level of solidarity in light of the world situation. According to Schirrmacher, there are politicians, journalists, and leaders of non-Christian religions who are campaigning more intensively for the destiny of persecuted Christians than many church leaders.

Schirrmacher spoke on a panel with representatives of all major denominations, and his statements are all accessible on the internet.

In his contribution to the panel, Schirrmacher expressed sharp criticism on his own “guild,” theologians who are working within the world of scholarship. On the one hand, academic theologians from all denominations still largely ignore the topic of martyrdom. This topic belongs within Christology and pneumatology, and Christian ecclesiology cannot be addressed without incorporating the topic of suffering for Christ. However, there is hardly anything in dogmatic theology that can be found on this. Church history, pastoral theology, and liturgy have to deal with this topic more intensively.

Why are theologians who live and work in situations where there is persecution not listened to more intensively? Why is that which thy write not accepted as true, let alone seen as scholarly theology?

It is not only theology which is still largely dominated by the West and ignores the everyday reality of suffering of many churches. Church life also largely pass by this fact. And as far as solidarity with persecuted Christians is concerned, it is still largely limited to one’s own denomination.

In Schirrmacher’s opinion, however, no Christian and no church can say that they do not have the time, the personnel, and the financial means for the simplest form of solidarity, which is prayer. A short prayer for those Christians affected by sheer violence should simply have a place in every Sunday worship service, in every Church event, and in every individual’s morning and evening prayer. 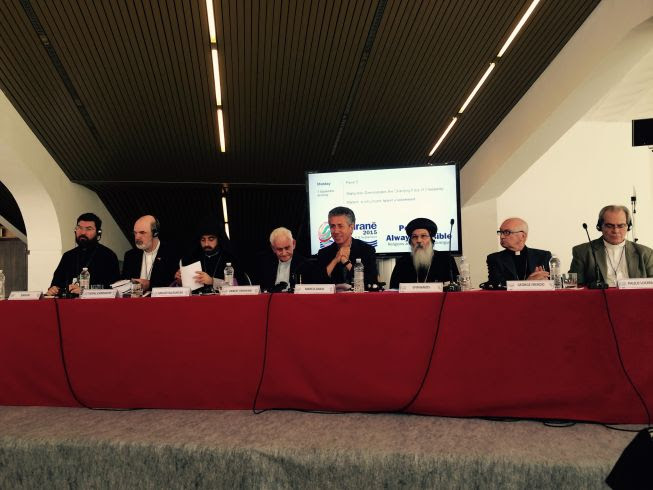 Working for persecuted Christians has a positive effect on ecumenical relationships. There is not only ecumenicity among martyrs. Rather, it is in suffering for Christ that we often first recognize others to be fellow Christians. It was just 50 years ago that most Christians did not even accept the seven ancient Oriental churches (Coptics, Syrians, Armenians, Ethiopians, etc.), who currently suffer most bitterly, as Christians on account of their alleged Monophysitism (“teaching of one nature”), according to Schirrmacher. That, however, is history. It has long since been recognized that these churches are essentially saying the same thing about Christ’s nature as has traditionally been believed but are using different emphasize in terminology.

The President of St. Aegidio, Marco Impagliazzo, who moderated the panel, named Schirrmacher as perhaps the person who is most familiar with the situation regarding the persecution of Christians around the world and, indeed, with respect to all denominations. He is reported to have personally spoken with the Pope about this several times and with all major leaders of Christian churches. In the near future, one of Schirrmacher’s visions will become a reality in Tirana: an ecumenical conference, in which persecuted church leaders from all denominations will report to other church leaders about their situation. This conference at the beginning of November will be conducted under the umbrella of the Global Christian Forum (General Secretary: Larry Miller), organized by Vatican, the World Council of Churches, the World Evangelical Alliance, and the Pentecostal World Fellowship.

The founder of Sant’Egidio, Andrea Riccardi, wrote a book in 2000 on the topic of the persecution of Christians (Il secolo del martirio. I cristiani nel Novecento; English translation of the title: The Century of the Martyr), which appeared in German in 2002. Since that time, Sant’Egidio, alongside Church in Need, is arguably the international Catholic organization which has occupied itself most intensively with the topic of martyrdom and religious freedom and, for that reason, maintains a close relationship with the International Institute for Religious Freedom (IIRF), for example with the IIRF’s representative for Rome, Prof. Thomas K. Johnson.