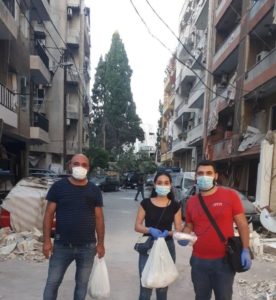 At the WEA Conference in Jakarta last year, Spiritual Care Teams, consisting of people from many countries, prayed with delegates and speakers. These teams believed in the power of prayer to positively change situations, attitudes and to prepare delegates and speakers to have an even more dynamic encounter with the Lord, His Word and His people at the Conference.

From early in the Covid-19 crisis and the ensuing lockdowns, the Abbalove Church, saw the need to expand the role of Spiritual Care Teams to be an active element of the church’s ministry to make sure that no church member was left alone. Teams were organized to make sure that every member of the church was contacted, encouraged with Scripture and prayer, and their needs recorded and supplied. It was both powerful and effective. The fruit of this loving care was that teams expanded their care to the unreached. They sanitized homes, provided emergency food relief, prayed with the stressed and saw many coming to faith in Christ.

Today, after the massive bomb and destruction in Beirut, Lebanon, we have a new and exciting development of Spiritual Care Teams as they mobilize teams to minister to the people of the city of Beirut.

Let me introduce you to Pastor Chady El Aouad, the Senior Pastor of the Evangelical Abundant Life Church and Ministries, Beirut, Lebanon. I have witnessed the ministry of this church over a number of years and seen how they have cared for the suffering. I was invited to speak at a conference there during the Syrian crisis. It was moving to see the number of pastors who came from extremely dangerous situations and townships in Syria and Iraq that were being bombed. I asked one pastor where he would be staying after escaping Syria, and he replied, “No, I’m going back. The church needs their shepherds and the people need Christ more than ever.” These pastors were inspired by the love and commitment of Pastor Chady, and so they endured the dangers to come and willing to face the dangers in returning again to Syria.

Now, a new crisis has emerged. This time not in Syria, but just two minutes drive from Pastor Chady’s Church. By God’s grace, Pastor Chady was not in his office when the bomb exploded. The devastating blast blew through his church causing extensive damage throughout the building. His office, where normally he would have been working was filled with flying glass that could easily have killed him. But it was his birthday so he had taken the day off. Thank the Lord for birthdays!!!

Pastor Chady immediately began mobilizing his members to minister to a devastated city. Two weeks before the blast Abbalove had decided to stand with and support Pastor Chady as they ministered to the victims of the Covid-19 pandemic, massive corruption and the economic collapse of the nation. Immediately after the bomb, Abbalove doubled our support for Pastor Chady and the Abundant Life Church. We believed in his integrity, passion, commitment and ability to mobilize in the face of this horrific disaster.

Pastor Chady sent me a report of what had happened and how the church was responding:

“On the afternoon of the 4th August 2020, two explosions occurred at the port of the city of Beirut, the capital of Lebanon. The second explosion was extremely powerful, and caused at least 210 deaths, 6,000 injuries, US$30 billion in property damage, and left an estimated 300,000 people homeless.

The event was linked to about 2,750 tons of ammonium nitrate. The explosion was detected by The United States Geological Survey as a seismic event of magnitude 3.3; and was felt in Turkey, Syria, Israel and parts of Europe. The explosion was even heard in Cyprus, more than 250 km (160 miles) away. It is considered to be one of the most powerful non-nuclear explosions in history.

The Abundant Life Church building, being close to the explosion (2 minutes driving distance, around 4 km away) and our Church families’ homes and properties suffered horrific destruction. Nevertheless, we decided that our first priority was to reach out and respond to the needs of our city.

We decided to move on as Elders, Pastors and Leaders of our Church and form teams with around 100 volunteers from our members as there was an urgent need to become the answer to the thousands of people that are affected by the explosion. Even now, many thousands are looking for help, answers, comfort, food, water and essentials for their daily life, after losing almost everything. For that reason we decided to move on four levels, prioritizing the needs of the people and valuing souls over our own Church Building devastation and catastrophe.

We mobilized Spiritual Care Teams to go to the most devastated areas, with food, water and the New Testament, to comfort those families, give them food and water, pray with and for them and to see what other practical help we can provide them.

Another team began visiting our church families to help them repair their homes, properties, businesses and cars. Also, to pray with them and counsel them, especially as many are emotionally and mentally affected by the disaster.

Level 3: The Poor and Unemployed

We began to prepare boxes, parcels and hygiene that can sustain the poor and unemployed for one month,. So many were in poverty from the pandemic, corruption and economic collapse and after the bombing many more have lost their jobs and their means to support the lives of their families.

After focusing on the above areas, we have also begun to clean our church building from all devastation and destruction and to seek to repair all the horrific damage and get the sanctuary ready again to be used. We want to restart our church services and ministries to be better able to be a blessing to our capital, our nation and the Middle East.

So far we are seeing tremendous results from the thousands of meals and bottles of water that we have distributed and the so many hundreds of boxes of parcels that our SCT’s have given away including thousands of New Testaments.

We are seeing so many coming to Jesus with tears, praying with us and asking for counseling. Many others even received healing once we prayed for them, and the amazing positive reports we are getting from our teams when they share the message of love and forgiveness with the most affected communities is so encouraging.

God is on the move and I really believe that Jesus is going to turn the aches into glory, the mourning into dancing, and the devastation into salvation. I am believing God for a spiritual awakening and a revival to be the result of this massive trauma and disaster. Jesus is still on the throne and I know He will make everything turn around for his glory, amen and amen.

Lebanon and the Middle East Shall be saved!”

Knowing Pastor Chady, I know these are not empty words. He has passion, compassion and faith that the Lord will continue to use them. He is a man of courage and vision with a great faith that their call is to share the Gospel throughout Lebanon and the Middle East.

Through this amazing ministry, and the mobilization of Spiritual Care Teams, many Lebanese are finding Christ. Let’s pray for them and stand with them in this kairos opportunity that has been thrust upon them.

Do not let them stand alone!