The Ecuadorian Evangelical Fellowship (EEC) was formed in January 1964 by the leaders and representatives of evangelical denominations, independent churches, missions and organizations.

The three-fold purpose of the Ecuadorian Evangelical Confraternity is to:

1) Promote unity and collaboration among churches and evangelical organizations.

2) Defend the rights of Evangelical believers. In previous years and even today, discrimination and persecution against evangelicals and people of other religious minorities exist.

3) Represent the E vangelical Church before the powers of the state and citizens in general.

Today, the Confraternity represents some 2 million Evangelical Protestant Christians living in Ecuador, making up 12 to 15 percent of Ecuador’s total population including minors, and serves as a platform to promote not only unity among evangelicals but to train future ministers all across the country.

Through an interview with its current president Estuardo Lopez, WEA was able to learn of the various projects the Confraternity is currently carrying out including in political and societal realms. 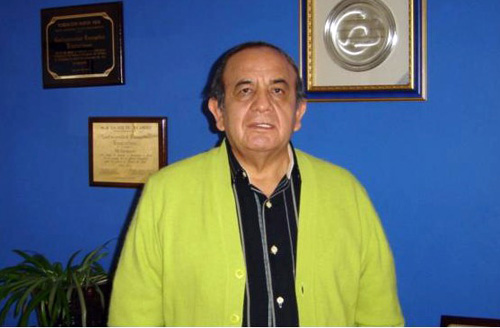 WEA: What alliance-related work or news can we thank God for in this last month or year?

Lopez: The government invited the most recognized religious organizations in the country to conform a commission to draft a bill known as the Law on Religious Freedom and Equality.

Although religious freedom is consecrated in the current Constitution, in practice this is not a reality. For this reason, we have been working on a bill that would allow religious freedom and equality to avoid discrimination against religious minorities, who are legally disadvantaged by the privileged position currently reserved solely for the Institution of the Roman Catholic Church.

The struggle to get this bill approved by the National Assembly (Legislative Branch) still continues and we remain alert so that the aspirations expressed in this bill are not circumvented by a government that declares itself democratic and a civil rights advocate.

WEA: How has this lack of regulation regarding the equality of religious freedom affected evangelical churches?

Lopez: According to the current constitution, a secular state implies not favoring any religion, but being neutral. We would like religious freedom and equality to become a reality through respect for all religions represented in Ecuador.

WEA: Could you share some examples of your involvement and commitment to the public in your local community?

Lopez: We publish a magazine called "Evangelical Presence in Ecuador ". This is a historical summary of the formal presence of evangelicals in Ecuador that covers more than 115 years since the government of Eloy Alfaro. The first missions that arrived to Ecuador were the Missionary Union and the Christian and Missionary Alliance. This journal records the progress and the definite establishment of the Evangelical and Protestant churches in the country and the contributions they have contributed to the general development of Ecuador.

Contrary to the public’s negative perception of evangelicals as praying and singing all day long doing nothing for the public or society, the magazine emphasizes contributions made to the sectors of health, education, communication, and community development over 100 years in Ecuador.

This document has been an important contribution towards how Evangelicals today are perceived today. The general public and government authorities perceive us as balanced and recognize our contributions to Ecuadorian society.

The Confraternity is also making efforts to train and develop pastoral leaders found mostly in rural churches in the areas of management and leadership.

Inhabitants of rural areas are not serviced properly and have limited resources to fight for their rights which is why so we support them so that they may grow and develop through training in the areas just mentioned.

These days we are working on the organization of the Second National Evangelical Summit under the theme "Church, Society and Children”. The summit rises in uniformity with the ongoing Global Evangelical Movement called the “4-14 window”, which motivates and trains churches and organizations to work for children aged 4 to 14 years.

This Second Evangelical Summit will be carried out with the participation of more than 500 pastors and representative leaders across the country in the month of October 2012 at New Life Camp, located in a beautiful valley near Quito.

The EEC believes that politics is a mission field, which is why it has developed a series of activities for pastors and leaders to address and discuss issues relevant to the national situation as well as to shepherd and guide members of our churches who have the vocation to participate in politics so that their contribution may be significant in this important area of society shaping. Christians should be the light and salt of the earth at all times and everywhere.

WEA: What other services would you like to see coming from the World Evangelical Alliance in the future?

Lopez: CEE considers that the WEA could support National Alliances in the training of leaders in the area of economic sustainability so that the services and contributions offered by the National Alliances may be relevant and strengthened to the churches and organizations.

It is important to highlight that the economic resources of the National Alliance are scarce due to the limited financial contribution of its members which sometimes results in not having enough to cover basic costs of administration.

Due to not having appropriate financial resources, the EEC could not catch up with the contribution of its fees as a member of the WEA. However it should be noted that churches and national organizations expect the EEC to undertake a series of service projects to promote an integral development and to be a positive presence in public spaces.

In previous years WEA organized workshops in several cities in Latin America to train the leaders of the alliances in the areas of administration, finance and leadership. These issues remain of great importance because by receiving such training our alliances can be strengthened and they would have the resources to meet administrative expenses and undertake projects for the needy through the contact and recommendation of the WEA before funding agencies.

WEA: WEA offers a leadership program under the WEA leadership Institute that trains personnel to efficiently tackle issues that come up within in associations like you just mentioned. Do you know about this program?

Lopez: I have knowledge only of the name of this program, but so far there has been no formal relationship with it. I consider it important and necessary and hope that the proposals may soon become a reality.

WEA: Finally I would like to ask about any prayer topics that the alliance has today.

Lopez: I ask for prayer for our financial needs so that God may open a way for us to overcome this serious crisis. Also in the same way, so that God may give us the creative ability to find financial resources in our own country to allow us satisfy our basic needs, please pray for the Second Evangelical Summit with emphasis on the 4-14 window, we believe that this event will be a great blessing and challenge for the church and country.

We thank God that in recent months, the evangelical unity promoted by the EEC has been strengthened through the participation and support from other organizations representing the country like the Ecuadorian Council of the Elderly, the Ecuadorian Pastoral Confederation and the pastoral staff from different cities.

The efforts and the continued presence of the EEC promoting unity and collaboration among churches and evangelical organizations before the powers of state and society in general have paid off and today the State continues consulting and summoning the representatives of the Ecuadorian Evangelical Confraternity to resolve problems and clarify questions that are necessary to maintain a close and respected relationship. 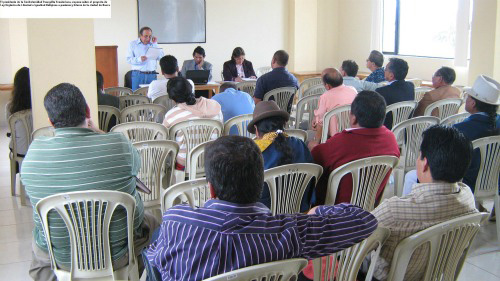 President Estuardo Lopez makes a presentation regarding the religious freedom and equality bill to pastors and leaders in the city of Ibarra.